It’s been a really bad trade to bet against Tesla (NASDAQ:) this year. Every small correction was followed by a powerful rally, pushing the stock to new highs almost every day.

Tesla shares have surged about 500% this year, fuelled by improved car sales even during the pandemic and the company producing a profit for the .

But that remarkable run seems to be taking a breather this week as Tesla shares have fallen every day since hitting a record close on Monday, which was the first day of its stock-split trading.

Tesla stock was down another 9% on Thursday closing at $407, adding to a 17% decline since Monday’s close. A stock is considered to be correcting when it falls more than 10% from the latest high, while a 20%-plunge would put it in a bear market.

On the face of it, there were two announcements this week that triggered this downside move amid the general weakness in tech shares. 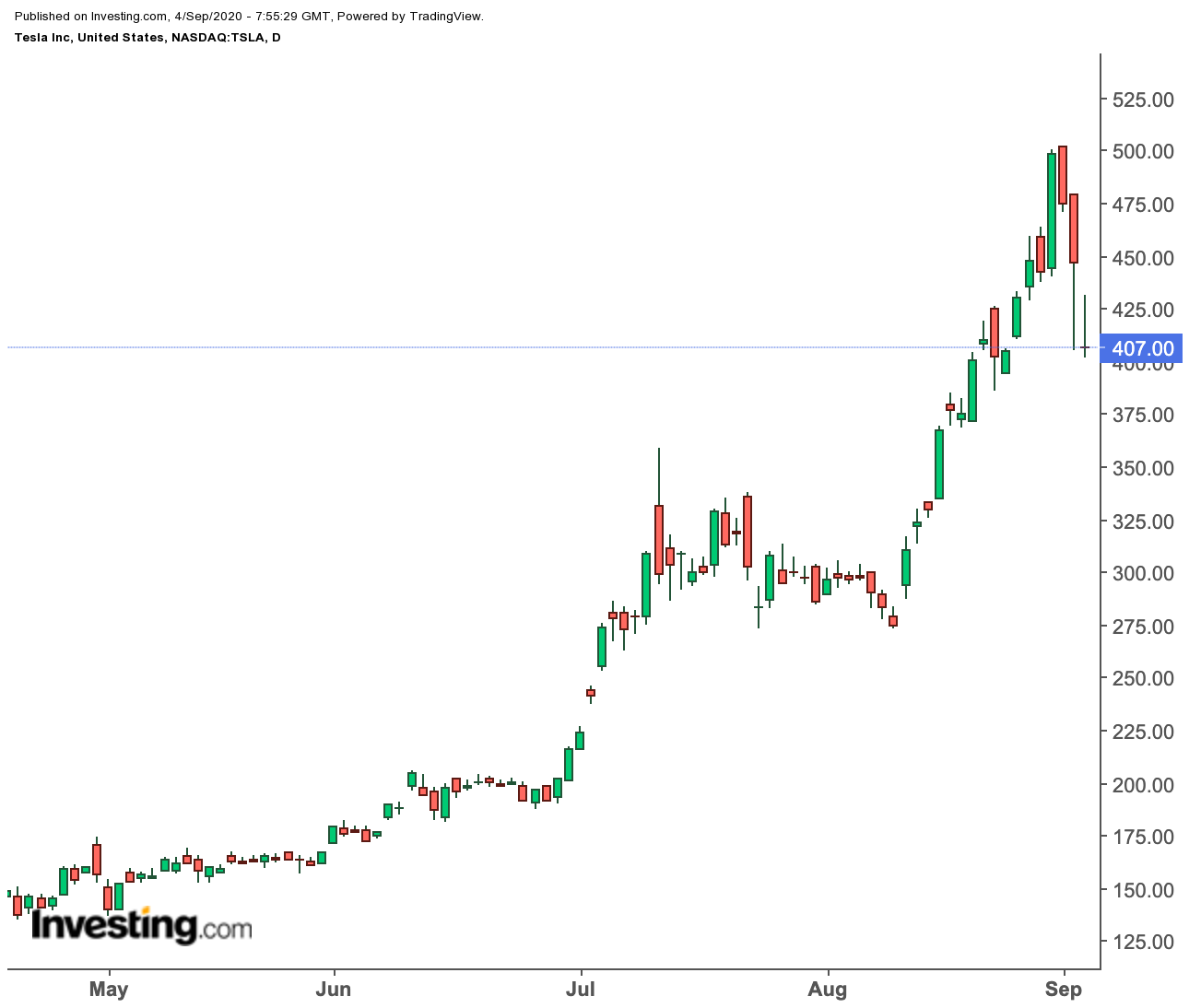 First, it was Tesla’s plan to sell shares in the market that could dilute its value. The company said in a regulatory filing on Tuesday that it plans to sell as much as $5 billion in shares “from time to time” to fund growth as the company doubles its factory count.

That news was followed by Baillie Gifford’s regulatory filing that showed the company’s largest shareholder had cut his holding in the company. The Edinburgh-based investor held a 4.25% stake in Tesla as of the end of August, down from 7.67% in February and 6.32% in June. According to Tesla’s current $382-billion market valuation, the stake is worth $16.2 billion.

Again, it’s hard to tell whether this correction is the beginning of a massive move to the downside, but many analysts believe that the stock’s powerful run since its decision to announce a stock split had no fundamental justification.

Early last month, Tesla announced it would split its shares in a 5-for-1 exchange, a move designed to make the stock less expensive. Tesla jumped more than 80% between when the company announced a stock split on Aug. 11, and when it actually went into effect on Aug. 31 even though stock splits are purely cosmetic.

With this momentum created by the stock split, Tesla shares were also in demand ahead of its widely expected inclusion in the coveted Index. The car-maker became eligible for an S&P 500 slot after it reported profits for four consecutive quarters.

In our view, this is certainly not a good time for long-term investors who buy stocks on their fundamental strength to buy Tesla stock. The retail frenzy, fuelled by the stay-at-home environment, has made Tesla valuation almost impossible to justify.

In a note carried by CNBC, Credit Suisse told its clients that four key factors have been driving the rapid appreciation in Tesla shares, including short investors covering their positions and passive investors purchasing shares ahead of possible inclusion in the S&P 500. In other words, reasons beyond the company’s fundamentals are driving stock performance.

Without reading too much into this week’s correction, it’s no secret that Tesla and other growth stocks have immensely benefited from the availability of easy money and 1.5% margin loans. These monetary conditions have pushed these stocks’ valuations to an unrealistic level, triggering the law of gravity. It’s our view that it’s not the right time to buy Tesla stock, which also has the tendency to lead in any downward move.