The rally in Intel (NASDAQ:) shares thus far in 2021 is promising, after the stock had a few challenging years. Year-to-date the stock has surged more than 25%, outperforming both the tech-heavy and the industry benchmark, the —by a big margin.

That rally accelerated in March after new Chief Executive Officer Pat Gelsinger announced a turnaround plan that could help fuel growth and maintain Intel’s role as the world’s biggest chip producer after many missteps that hurt sales.

In February, Intel ousted then-chief executive Bob Swan to bring in Gelsinger, the former chief of VMware (NYSE:)—who had previously spent years at Intel on the engineering side of the business—to run the troubled semiconductor giant, which last year ceded the title of America’s most valuable semiconductor company to rival NVIDIA (NASDAQ:).

This occurred as Intel failed to churn out next-gen chips ahead of rivals who had outsourced much of their production to Taiwan Semiconductor Manufacturing (NYSE:). These production setbacks helped competitors gain market share, while severely punishing Intel shareholders.

During the past year, when other chip manufacturers saw their share prices skyrocket as they benefited from surging demand, Intel’s stock barely budged. In fact, it fell more than 3%, while NVIDIA more than doubled in value. 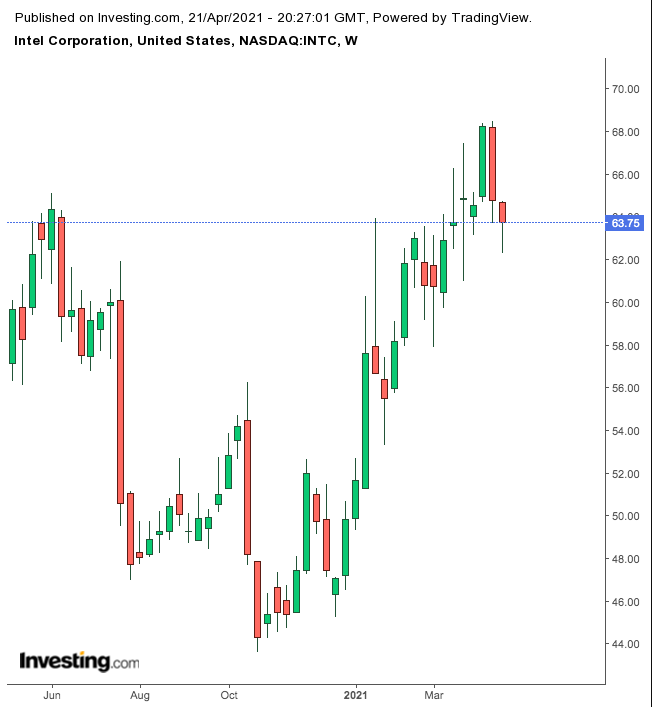 Despite the recent momentum in Intel stock, which closed Wednesday at $63.70,  investors shouldn’t expect a major earnings surprise later today when the California-based company releases its Q1 report. Sales are projected to decline 10% this fiscal year, after they rose 8% in the previous year. They rose just 1.6% in 2019.

Amid these , Intel is trying to reverse its course, which is fuelling investor optimism. Last month, Gelsinger unveiled a grand plan that included creating a $20-billion new foundry business that will manufacture chips for other companies. He also plans to use rivals’ factories to outsource production of more Intel components.

Some analysts are skeptical about the Santa Clara, California-based company’s new direction, reminding investors that the chipmaker couldn’t succeed in its earlier foray into the foundry business.

“Obviously, there will be many questions whether Intel can be successful as a foundry given failure in the past,” Evercore ISI analyst C.J. Muse said in a note last month. But, he added, Intel’s new plan “suggests this is a much more serious endeavor under current leadership.”

JP Morgan analyst Harlan Sur, who reiterated a buy rating on Intel in January with a price target of $70 a share, believes that Gelsinger’s track record at VMware and his instrumental roles as Intel’s chief technology officer provides the right background to navigate the company through what is arguably one of the most challenging periods of the company’s existence.

Intel stock is a turnaround bet that suits long-term investors, especially when the chip boom is expected to last many years amid wide-ranging shortages and political urgency to build its home-grown capacities. But to succeed in this global race, companies have to spend big, as with the plan Intel announced last month, and wait for the windfall in years to come.