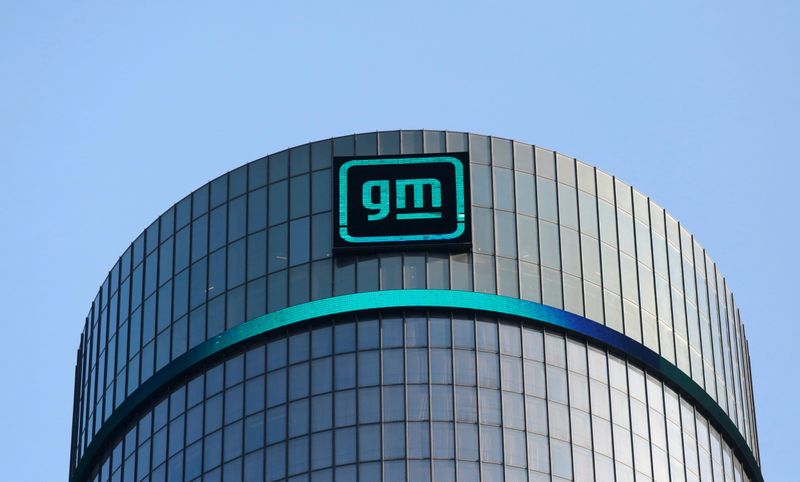 © Reuters. FILE PHOTO: Logo of GM atop the company headquarters

By Sharay Angulo and David Shepardson

MEXICO CITY (Reuters) -General Motors Co said on Thursday it will invest $1 billion in a manufacturing complex in Mexico, drawing immediate criticism from the union for U.S. autoworkers as it prepares to build electric vehicles in 2023 in the border state of Coahuila.

GM said it is building a new high-tech paint shop that will start operations from June at the Ramos Arizpe site, which currently assembles conventional internal-combustion vehicles, including the Chevrolet Equinox and Blazer models, along with engines and transmissions.

The United Auto Workers criticized GM’s decision to build EVs in Mexico instead of using the union’s members in the United States when Washington is considering large new incentives for electric vehicles.

“At a time when General Motors (NYSE:) is asking for a significant investment by the U.S. government in subsidizing electric vehicles, this is a slap in the face for not only UAW members and their families but also for U.S. taxpayers and the American workforce,” said UAW Vice President Terry Dittes in a statement, calling it “unseemly” to accept U.S. government subsidies and make vehicles outside the United States.

GM responded to the UAW statement by noting it has “recently announced nearly 9,000 jobs and more than $9 billion in new electric vehicle or battery cell manufacturing facilities in Michigan, Ohio and Tennessee.”

The White House did not immediately comment, but President Joe Biden has called for $174 billion to boost U.S. EV production, sales and infrastructure.

On Wednesday, Biden told U.S. lawmakers “there’s no reason why American workers can’t lead the world in the production of electric vehicles and batteries.”

GM issued a news release about the Mexican investment only in Spanish on its website and later provided an English translation when asked.

GM said it also plans to build batteries and electrical components at Ramos Arizpe and is making other improvements to its manufacturing complex.

GM did not say when it began building its new paint shop but previously came under criticism from former President Donald Trump for its Mexican operations. Trump had threatened to tax GM vehicles imported from Mexico.

A GM spokesman said the company was not announcing or confirming the electric vehicles that will be built in Coahuila, describing Fiorani’s comment as speculation.

The automaker already makes electric vehicles at four locations in the United States and Canada. GM has said it aspires to halt U.S. sales of gasoline-powered passenger vehicles by 2035.

GM’s Ramos Arizpe expansion will include new capacity to make batteries and other electronic components, which will begin during the second half of this year, the company said.

“I’m sure this investment will contribute to continue boosting Mexican manufacturing while bringing development to the region, the industry and the country,” said Francisco Garza, president of GM’s Mexican unit, during a webcast announcement.

Garza said he could not rule out adding a third production shift to the Ramos Arizpe facility in the near term, which would depend on meeting certain economic conditions.

Are FANGs Going To Breakdown Soon?