For investors in the Walt Disney Co. (NYSE:), tomorrow’s quarterly report is significant. It could show that subscriber growth in its streaming service Disney+, which has become the company’s main growth engine during the pandemic, is slowing as the U.S. economy reopens and people indulge in outside activities after a year of binge TV watching.

Netflix (NASDAQ:), Disney’s main rival in the streaming business, delivered a disappointing last month when it told investors that its streaming service added far fewer new customers in the first three months of 2021 than Wall Street expected. And according to NFLX’s outlook, the current quarter will be more challenging. Netflix predicts a gain of just 1 million new customers—a fraction of the 4.44 million projected by analysts.

Disney+ topped 100 million users in just 16 months after its launch in the U.S. in November 2019 and rolled out to Canada, Australia, Latin America and Singapore in the following months. The rapid ascent of the service underscored the power of the Disney name, along with entertainment franchises that include Marvel, Star Wars and Pixar. Netflix, the pioneer in subscription streaming, finished 2020 with almost 204 million subscribers globally.

Disney’s “Nomadland,” a film about a grief-stricken woman travelling through the American West, won the 2020 Academy Award for best picture, delivering a major victory for the company, ending an almost 20-year drought for Hollywood’s biggest studio.

Massive growth in Disney+ its stock throughout the pandemic as visitors deserted its theme parks, movie theaters and cruise lines. After rallying 25% last year, Disney shares have lost their momentum in 2021. They closed on Tuesday at $181.67. 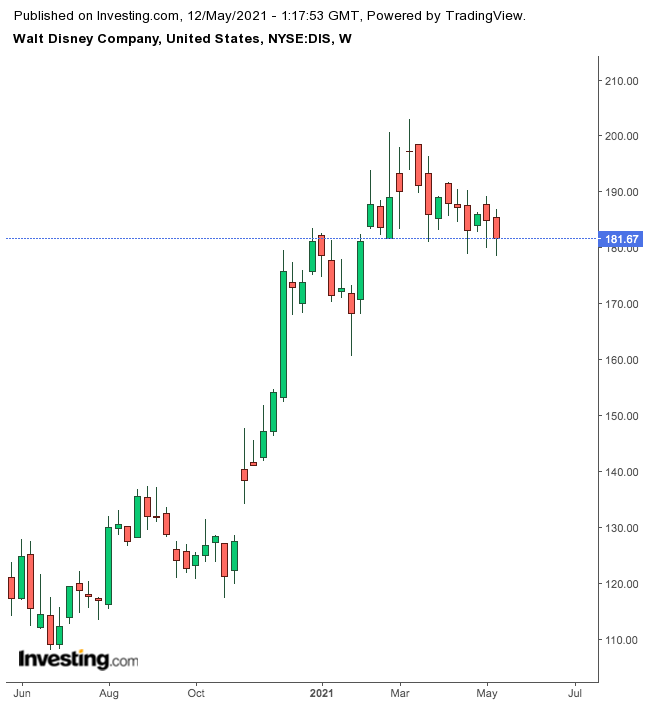 Though a possible slowdown in streaming subscribers is a headline risk that investors should be aware of ahead of tomorrow’s report, there are other, positive catalysts that could support revenue growth this year.

These include a spike in revenue from theme parks after their gradual reopening, pent up consumer demand, as well as initial signs of traction on the international rollout of Star, the company’s new content hub. UBS analysts, in a note last month, reiterated its buy rating on shares of Disney, saying it was “setting the stage for a rebound.”

“We expect results to highlight steady direct-to-consumer momentum ahead of a ramping content slate while recovery at the parks begins to take shape.”

Before the pandemic, the Disney parks division had been one of the company’s most reliable money-makers. Income from this division rose 70% between 2013 and 2017. In 2019, the last full year before COVID-19, the unit’s operating income rose 11%—top among Disney divisions—as crowds regularly reached capacity on busy days.

Presently, Disney’s parks in both Florida and California are open, albeit with limited capacity, but that could change this year as more of the U.S. population gets vaccinated and COVID restrictions are relaxed.

Disney, with its core revenue generating units still under pressure, is betting on the reopening of the economy and a success of its streaming business. These two catalysts are very much reflected in the share price, making it tougher for the stock to continue to perform strongly from here. DIsney’s guidance about the remaining part of this year holds the key to set the direction for its stock.

China strengthens supervision of accounting firms in fight against forgery By...

The World Runs On Chips, SOXX Could Double