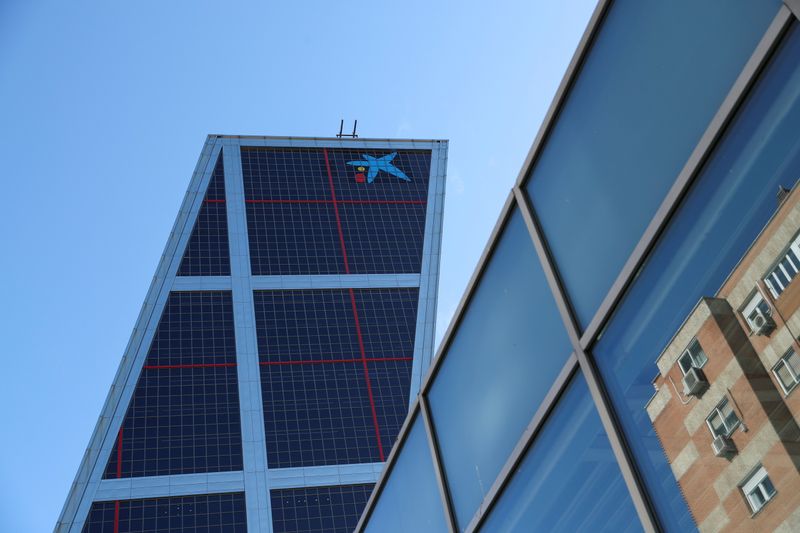 © Reuters. FILE PHOTO: A building is reflected on glass next to CaixaBank headquarters in Madrid, Spain May 14, 2021. REUTERS/Susana Vera

MADRID (Reuters) -Hundreds of Caixabank employees gathered outside the Spanish lender’s shareholder meeting in Valencia on Friday to protest its plans to cut nearly a fifth of its staff in Spain, while some retail investors complained about executives’ pay.

Video released on social media by the Comisiones Obreras (CCOO) union showed people, some wearing masks with faces of Caixabank executives, protesting outside Valencia’s Palacio de Congresos, where the meeting was taking place.

Some were shouting: “They triple it (their salaries) and take it away from us.”

A spokesman for the union said earlier this morning that hundreds had turned up to protest against the bank’s layoff plans.

Shareholders nevertheless backed a hefty salary proposal for new Caixabank Chairman Jose Ignacio Goirigolzarri, while the Spanish state, which holds a 16% stake in the lender, voted against it, a source with knowledge of the matter said.

Caixabank did not provide details on how shareholders voted.

There have been other protests in Spain against plans by five Spanish banks to cut 18,000 jobs, which have coincided with government calls to rein in top bankers’ pay.

Labour Minister Yolanda Diaz said on Friday it “was not the moment for layoffs.”

“We have to overcome this crisis together and undertake common efforts”, she told reporters in the northwestern region of Galicia.

Caixabank, Spain’s biggest domestic lender by assets after its purchase of rival Bankia, last month announced plans to cut around 8,000 jobs, one of the biggest staff reductions in Spanish history.

At Friday’s annual meeting, shareholders gave their blessing to a fixed salary of 1.65 million euros ($2.00 million), plus a bonus of up to 200,000 euros, in 2021 for Goirigolzarri, who was Bankia’s former chairman.

Before the merger, the fixed part of Goirigolzarri’s salary was capped at 500,000 euros, while the bonus or variable remuneration could rise to a maximum of 300,000 euros. This was a precondition for the 22.4 billion euros in state-aid Bankia received at the height of a European debt crisis in 2012.

But now that Bankia has disappeared, the remuneration cap on Goirigolzarri has been removed.

Though the government and the Bank of Spain have no power to enforce cuts on fixed salaries of banks’ executives, the matter has become sensitive for Caixabank.

On Thursday, the Bank of Spain called on banks to be “extremely prudent” regarding bankers’ bonuses, while the Labour Ministry has called on Caixabank and BBVA (MC:), which also plans layoffs, to reduce the number of staff cuts, a source familiar with the matter told Reuters.

On Friday, Goirigolzarri said in a speech to shareholders at the meeting that “short-term workforce adjustments” were needed to preserve the “maximum number of sustainable jobs for the future”.