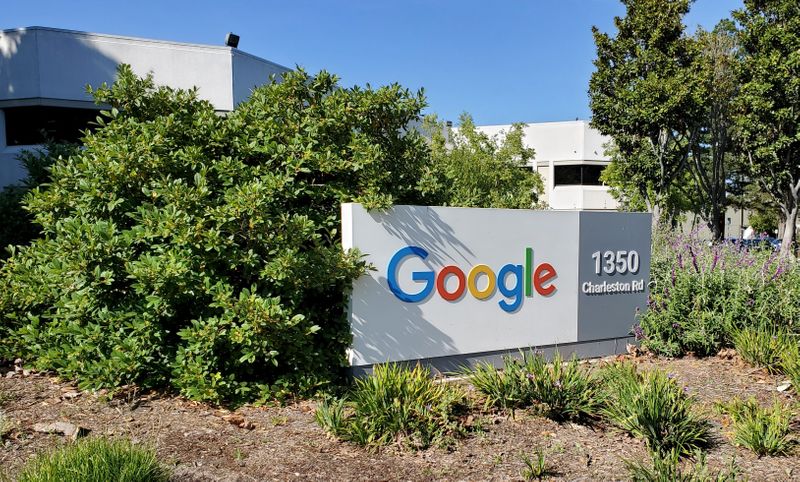 © Reuters. A sign is pictured outside a Google office near the company’s headquarters in Mountain View, California, U.S., May 8, 2019. Photo taken May 8, 2019. REUTERS/Paresh Dave

(Reuters) -Alphabet Inc’s Google (NASDAQ:) on Tuesday unveiled updates across many services, including Maps, Photos and operating systems, as the company showcases its role in a world that has become more digitally connected during the pandemic.

The announcements during the virtually-held Google I/O developer conference add up to a boost for the company’s smartwatch efforts, which compete with Apple Inc (NASDAQ:) , and for its collaboration tools that rival offerings from Microsoft Corp (NASDAQ:).

They also show how Google is aiming to demonstrate that its advancements in artificial intelligence (AI) will keep users attracted to its ad-supported or paid services for shopping, communication and entertainment even as pandemic lockdowns ease and people resume in-person activities.

Google said its smartwatch operating system, Wear OS, would be adopted by its newly-acquired Fitbit (NYSE:) unit and Samsung Electronics (OTC:) Co , both of which had used their own systems for years. Now working together, the companies could attract more app developers and better compete with Apple Watch.

The company also shared new editing and viewing options for Google Docs and other work software, including a simple tool that suggests using inclusive terms instead of gendered words.

Chief Executive Sundar Pichai has made advocating for social justice a priority across the company, and in another move the company said by this fall its Pixel smartphones would better capture darker skin tones and curly and wavy hair in photos.

AI updates included a new effort to help drivers using Google Maps reduce sudden braking by navigating them on “safer” routes. Google Photos will offer users a reminder that they can search Google Images for specific objects in screenshots.

Android 12, the latest version of the mobile operating system active on over 3 billion devices globally, will arrive later this year packed with personalization features such as customizing apps’ color schemes. It will also enable devices to be used as a digital key for some cars.

In a tease of futuristic collaboration software, Pichai revealed Project Starline, video-conferencing booths that use so-called light-field displays to let people view a 3D representation of their counterparts. Healthcare and media companies would test the system, Pichai said.