The long road of Q1 earnings season is finally winding down as the last companies to report line up ahead of Memorial Day.

It’s been an amazing run, with more than 85% of companies beating Wall Street analysts’ earnings estimates, according to Factset. Analysts expect even better results in Q2, though that features very easy comparisons to a year earlier thanks to COVID. This afternoon brings results from chipmaker Nvidia (NASDAQ:), followed by Best Buy (NYSE:) tomorrow morning.

Besides earnings, it feels like things are getting into a quiet, pre-holiday trading mode, barring any major news. Volatility continues to ease, though investors might want to prepare for possible choppiness amid potential low volumes. The bond market is relatively steady, and seems to have found some stability after last week’s steep plunge. The question is whether there’s enough investor buying interest to push the market for a possible test of highs now that the sits just 1% below its all-time peak.

Mixed Earnings Picture So Far This Week, With Nvidia, Best Buy Ahead

Nordstrom (NYSE:) took a pounding in pre-market trading, falling 6% after earnings per share fell more sharply than the average Wall Street estimate. JWN maintained its previous guidance instead of raising it like some other retailers, which also may have disappointed some investors.

There wasn’t much early disappointment around earnings from Dick’s Sporting Goods Inc (NYSE:), whose shares soared 8% in pre-market trading today following a blowout earnings report that easily surpassed Wall Street’s expectations. The company cited a resurgence in team sports as kids got back on the field following COVID. DKS also raised guidance.

Luxury home builder Toll Brothers (NYSE:) beat analysts’ expectations but didn’t get much of a lift in pre-market trading, rising just a bit. The company hosts its earnings call this morning.

The NVDA call could be interesting due to what they might say about the global chip shortage and the company’s video game chips and data center businesses. Also consider listening for any comments about the company’s agreement to buy British chip designer Arm. That $40 billion deal faces regulatory hurdles in the U.K. and the U.S.

BBY shares got clobbered the last time it reported as the company fell short of analysts’ revenue expectations. The stock’s recovered a bit since then, but like a lot of other companies that did well in the “stay at home” economy, it faces questions about what sort of catalysts are ahead to keep the good times rolling.

BBY said in February that it expects same-store sales this year will range from a drop of 2% to a gain of 1%. Bulls might be hoping for an uptick in those numbers, but keep in mind the tough year-over-year comparisons. Companies like BBY also face more competition for consumer dollars this year as people spend more time traveling or going to restaurants after a year of not getting to do those things.

The Cboe Volatility Index () fell below 19 this week, near the lowest level it’s been since COVID. However, as we pointed out yesterday, it wouldn’t be all that surprising to see volatility perk up a bit ahead of the three-day weekend. Traditionally, some investors like to take protection ahead of market holidays.

Volume could start to flag over the next few days as people get out of town ahead of the holiday, at least judging by how things have gone historically. That means you might need to more carefully plan your trading for possible wider swings than usual with fewer sellers maybe around to meet buyers and vice versa.

Even after the holiday, VIX isn’t guaranteed to stay low. Choppiness in the markets could continue, especially ahead of next Friday’s May jobs report and the Fed meeting in mid-June. Investors are still trying to get a sense of whether inflation is truly “transitory,” as Fed speakers have been saying, and this debate is kindling some of the back and forth in prices.

Not Quite A Turnaround Tuesday

While major indices weren’t able to build on Monday’s gains yesterday, it’s probably fair to say it wasn’t a true “turnaround Tuesday” where the opposite thing happens from Monday. Instead, most of the indices bobbed up and down around unchanged most of the day before the S&P 500 Index settled slightly lower. Early on it had come within 1% of its all-time high.

One narrative heard around Wall Street Tuesday was the same one we heard on some of last week’s “down” days, that perhaps the economy has hit “peak growth” in its post-COVID recovery. Some of this talk yesterday may have been fuelled by April new home sales coming in shy of Wall Street’s consensus average estimate, research firm Briefing.com observed.

It’s the third housing-related report in the last week to miss analysts’ estimates, with April new home sales falling 5.9% from the previous month. The weakness might have hurt sectors like Materials and Energy, which both include many commodity-oriented stocks that can sometimes benefit from a strong housing market.

Tech again showed more muscle than some other sectors, helping power the to another day of small gains. Most of the so-called “FAANG” stocks again moved higher, even though mega-cap Apple (NASDAQ:) faltered. Semiconductor stocks generally had a nice session once again, and that sub-sector of tech is one that analysts say generally does well in an improving economy. NVDA and Advanced Micro Devices (NASDAQ:) both bucked the wider down trend in markets to have decent days yesterday.

One exception in semiconductors was Micron (NASDAQ:), which saw shares fall 2% Tuesday after some analysts said the company sounded cautious at a JP Morgan (JPM)-sponsored conference. MU is expected to open its books late next month and reported solid results last time out.

Is Commodity Surge Exhausting Itself?

Looking at the broader market, some of the worst–performing areas Tuesday were the ones known for their yields. Utilities were the second lowest on the leaderboard, which kind of goes against what you’d normally expect to see on a day when the drops the way it did yesterday. When Treasury yields fall, it can sometimes make yields in the stock market appear more appealing to some investors. That didn’t appear to be the case on Tuesday.

We’ve already talked about how the weak housing data might have hurt energy to some extent, and it might have also been a factor behind the drop in yields. It’s still kind of interesting to watch energy pull back on Tuesday when remained near recent highs above $66 a barrel.

However, seeing , and under pressure yesterday might have some people nervous about how long crude can stay near current levels, especially if more oil from Iran soon hits the market as some news reports have hinted. In general, there’s a sense that maybe the commodities rally is getting a bit tired. That could change today, but sentiment certainly counts for something. Working against any major retreat in commodities is the current soft dollar, now at 19-week lows. It might take a more hawkish-sounding Fed to give the dollar a lift.

Crude fell slightly this morning but remained above $65. Contracts going farther out in CME futures are lower than the front month, but still above $60 throughout the next year. 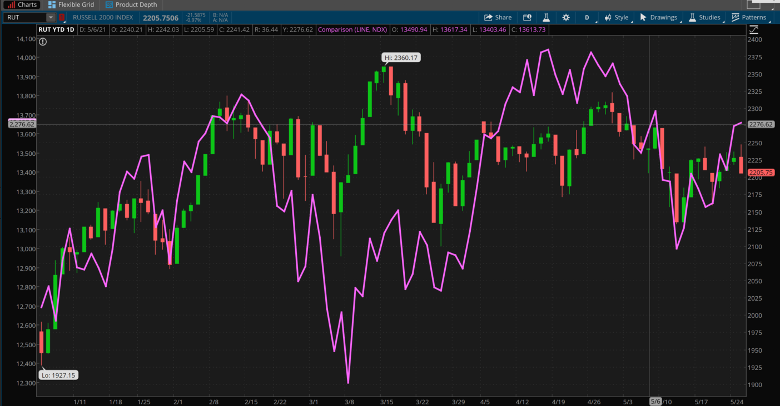 CHART OF THE DAY: LIKE A GLOVE. This year-to-date chart comparing the Index (RUT—candlestick) of small-caps to the Nasdaq 100 (NDX—purple line), known for its heavy focus on Tech, shows how much they diverged back in March as higher Treasury yields hindered the Tech sector and helped Finance (which is well represented in RUT). In recent weeks, however, the two have traded far more in sync. Data Sources: Russell, Nasdaq. Chart source: The thinkorswim® platform. For illustrative purposes only. Past performance does not guarantee future results.

Fed Has Choices Besides Tapering: Remember that when people talk about possible Fed “tapering” of its $12-billion bond-buying program, the program isn’t a one-trick pony. The Fed buys a mix of at least $80 billion a month in Treasury securities and at least $40 billion a month of agency mortgage‑backed securities. If it wanted to, it could change the mix instead of outright tapering its buys.

For instance, if rising mortgage rates and commodity prices start to weigh on housing (something you could possibly read into some recent data), the Fed could raise the proportion of mortgage-backed securities it buys, conceivably loosening conditions there. Or if it feels Treasury yields are getting too high, it could decide to raise the proportion of Treasuries it buys, hoping to be a counter-weight to market activity. Neither scenario would require any change in the overall $120 billion a month it’s spending—only a juggling of the asset mix.

There are a lot of complexities to consider as the next Fed meeting approaches in mid-June following the slight tone of hawkishness seen in last week’s Fed minutes. Analysts don’t think the Fed is likely to announce any changes then, but Fed Chairman Jerome Powell could get asked about possible changes the Fed might contemplate in the bond-buying program.

Inflation: In The Eye of The Beholder? Unless you’ve been living in a media-free cave for the past several months, you probably know that inflation talk has reached meme status—from the “transitory” language at the Federal Reserve to supply chain disruptions, to housing and labor shortages, and so on. The word from financial folks nowadays is to prepare yourself. But that’s easier said than done. First, it’s no slam-dunk certainty that inflation is here to stay. The Fed says it expects inflation to level off once we’ve righted the ship post-COVID. The yield on the dropped another four basis points yesterday to below 1.57%. And that’s just the tip of the inflation-assessment iceberg.

For example, there’s a difference between price inflation and wage inflation. There’s also a difference between how you prepare yourself as a consumer vs. how you prepare yourself as an investor. And here’s another one, from economic analyst and researcher Peter Boockvar: Over the past 20 years there’s been a big difference between inflation in the goods we buy at the store—food, gas, autos, televisions and such, and the services we receive. Goods inflation has been essentially flat, whereas services—and yes; that includes housing, health care, and college tuition—three things to which we’ve grown accustomed to annual rises—have averaged 2.8% annual inflation over the past 20 years.

Perhaps that’s one reason inflation has seemed like such a jolt this year: much of it is in the things we buy—at the retail level all the way down to the prices of raw materials. If inflation were to finally arrive in places where it’s been largely absent—particularly wages and raw materials—might services feel the squeeze? Or will we see inflation feed upon itself and become something more than “transitory?”

Tech Talk: Checking the technical picture, yesterday’s SPX close below 4200 after knocking on the door for the second straight day seems like a bit of a drag. The index bounced off its 50-day moving average last week and moved past what some analysts saw as resistance at 4180 early this week. However, the 4200 level appears to remain a solid resistance point, and the market might need a catalyst or two to close above it. The last time we saw a close higher than 4200 was nearly three weeks ago.