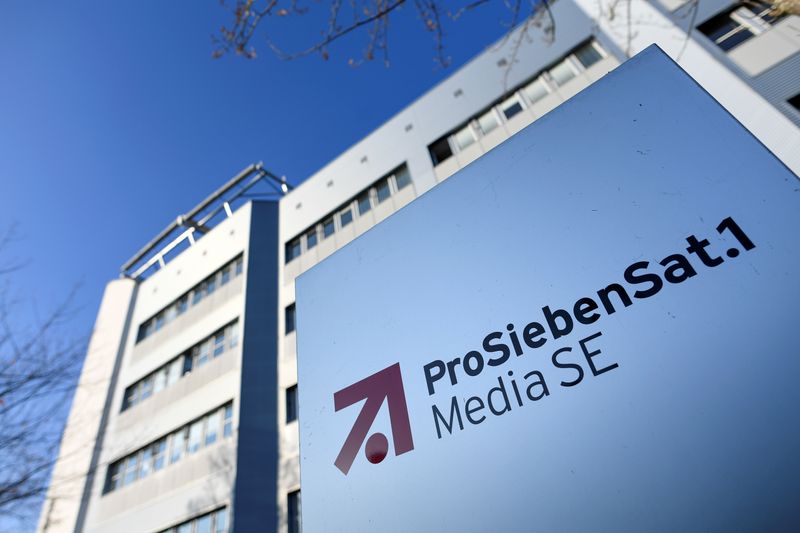 © Reuters. FILE PHOTO: The logo of German media company ProSiebenSat.1 is seen in front of its headquarters in Unterfoehring, near Munich, Germany, November 5, 2020. REUTERS/Andreas Gebert/File Photo

By Douglas Busvine and Elvira Pollina

BERLIN (Reuters) – Mediaset (OTC:) said it would not seek confrontation at ProSiebenSat.1’s annual general meeting on Tuesday but the German broadcaster’s largest shareholder pressed home its call to collaborate on strategy.

It has built up a stake of nearly a quarter in ProSieben in support of that goal, but the broadcaster of “Germany’s Next Topmodel” has repeatedly rebuffed its overtures, instead diversifying out of entertainment into dating and e-commerce.

“Our position as a long-term shareholder is not to apply pressure. We would love to have more engagement,” he added, offering to support the development of ProSieben’s entertainment business.

Mediaset said it controls a stake of 23.5% in ProSieben via shares and other financial instruments. Of that, it owns a direct voting stake of 12.4%, based on disclosures by the German company.

Giordani said Mediaset would back management’s resolutions at Tuesday’s AGM, saying: “It’s not the time for fireworks, but rather the time to build the right strategy for all ProSieben shareholders.”

Mediaset’s plans to establish a new business base in the Netherlands, to be called MediaforEurope (MFE), received a boost when it ended a long-running legal dispute with shareholder Vivendi (OTC:).

With the French media group lending its support, MFE should be established in September, creating “a company that can start to consolidate the market”, said Giordani.

Time is short, he said, pleading for Europe’s commercial TV industry to build a common advertising platform that can compete with the dominant digital advertisers, Google (NASDAQ:) and Facebook (NASDAQ:).

He dismissed in-country mergers, such as the recent deal struck in France between RTL’s Groupe M6 and TF1, which is controlled by Bouygues (PA:), as failing to address the industry’s revenue weakness.

“It’s pretty easy to find fast synergies on costs. But the media’s problems in Europe are not costs – they are revenues,” said Giordani.

“If you want to compete with the large sellers of advertising, you have to offer a continental product.”

He also said that, after a strong first quarter, Mediaset’s second quarter would be better. “We are very happy about how the business is performing today.”