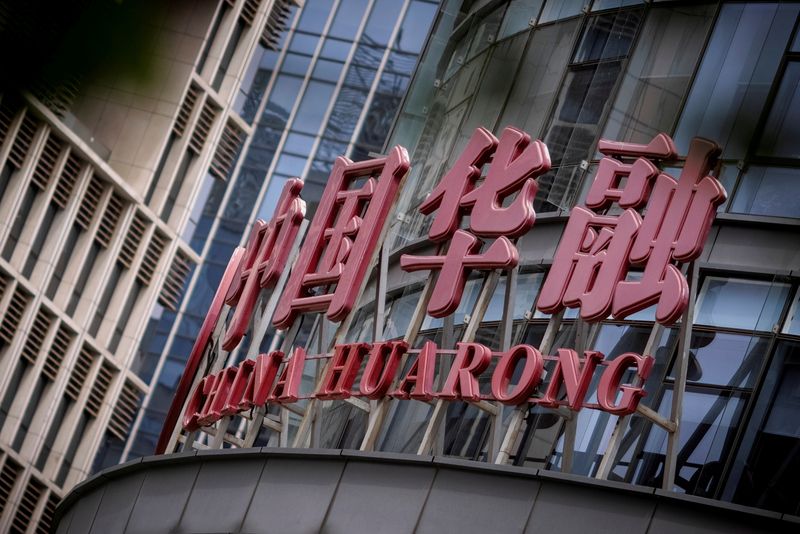 Regulators are pressing the state-controlled “bad bank”, which has been trying to restructure since 2018, to sell units including a bank, a trust, an investment firm and a consumer finance firm, the sources said.

The plan, one source said, envisions the authorities informally backing $20 billion of dollar debt coming due this year for the sprawling company, one of the nation’s four giant state-owned asset managers.

Huarong’s problems spooked investors in China’s dollar-bond market in April after it delayed its business results, prompting ratings downgrades, warnings from global agencies and an ongoing suspension in share trading. Huarong’s onshore and offshore subsidiaries have made timely repayments on maturing debt.

“The benefit of bailing out (Huarong) is great,” the other source said. “So is the harm of not bailing it out.”

The Beijing-based company, established in the late 1990s to handle soured debts at state banks, has the Ministry of Finance as its biggest shareholder. Former chairman Lai Xiaomin was executed in January after a graft probe into the period when he expanded Huarong into a financial conglomerate.

They asked not to be identified because the information is not public and they are not authorised to speak to the news media.

Huarong told Reuters in an emailed statement on Friday that regulators have asked it to “return to our roots, focus on our main business and build up core competitiveness.” It did not confirm or deny asset sales, saying it would make statements in the future, and did not comment on any debt guarantees.

“The company will earnestly fulfill our debt repayment obligations with a responsible attitude,” Huarong said, “At the same time, the company’s liquidity is in good condition and we have made proper arrangements and adequate preparations for future bond repayment.”

The Ministry of Finance and the China Banking and Insurance Regulatory Commission (CBIRC), Huarong’s regulatory supervisor, did not immediately respond to requests for comment.

The authorities have not made any final decisions on a rescue or on Huarong’s long-term business development prospects, the sources said. Regulators are waiting for the final audit results of Huarong’s delayed annual report, which could be released in August, before making such decisions, the second source said.

The backing for Huarong’s debt would not be a public announcement but more informal suasion from the authorities, as sometimes seen in China, to prevent creditors from taking drastic action, the first source said.

The CBIRC, for example, previously asked some banks not to withhold loans to Huarong and asked some state banks to be prepared to support it with cash, Reuters reported in April.

SEEKING BUYERS FROM HUNAN TO GERMANY

Beyond any rescue of Huarong, the plan aims to shore up confidence in investment-grade Chinese issuers in the offshore market, the two sources said.

Regulators are trying to avoid bankruptcy or “haircuts” for investors in Huarong’s offshore dollar bonds after the company’s difficulties recently sent their prices to record lows, the first source said.

The key aim of current approach is to ensure Huarong can roll over debt and, ideally, use future cash flow to repay its debt, the second source said.

The three-year push to streamline Huarong has been slowed by disagreements among the company, its shareholders and regulators, a third source told Reuters.

Now, a number of possible asset sales are in the works.

The government of central China’s Hunan province is in talks to take a controlling stake in Changsha-based Huarong Xiangjiang Bank, said the first source. The Hunan government and the Huarong banking subsidiary did not respond to requests for comment.

Deutsche Bank (DE:) plans to buy Huarong’s stake in their joint venture investment firm, Huarong Rongde Asset Management, said a fourth source with direct knowledge of the deal. Germany’s largest lender rejected this claim, saying that it has no such plans. Huarong Rongde did not respond to a request for comment.

Huarong has put Huarong Consumer Finance on sale, with food-delivery giant Meituan expressing interest earlier this year, the second source said. Meituan did not immediately respond to a request for comment.

A previous plan for the central bank to buy Huarong assets through a subsidiary was rejected by Chinese regulators, Reuters reported in April.