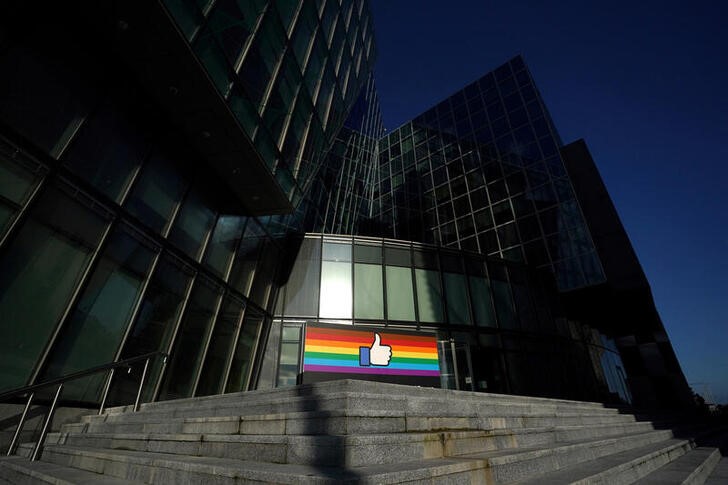 © Reuters. FILE PHOTO: General view of the Facebook logo at its EMEA headquarters at Grand Canal Square in the Docklands amid the coronavirus disease (COVID-19) pandemic in Dublin, Ireland, October 14, 2020. REUTERS/Clodagh Kilcoyne/File Photo

DUBLIN (Reuters) – Facebook (NASDAQ:) still plans to “aggressively” grow staff numbers in its European headquarters in Ireland but a company-wide policy allowing permanent remote work from other countries could slow that growth over time, its Irish chief said on Friday.

Ireland’s economy is hugely reliant on multinational firms that employ around one in eight Irish workers and any move to facilitate remote working abroad would add to the challenge already posed by a planned global corporate tax overhaul.

Facebook, which is one of Ireland’s largest such employers with around 3,000 full-time staff and another 3,000 contractors, will allow some workers to permanently relocate after more than a year of many working remotely due to the COVID-19 pandemic.

Eligible employees in Facebook offices in Ireland, France, Germany, Italy, the Netherlands, Poland, Spain and the United Kingdom will be able to move to another one of those locations. U.S.-based staff can also move to Canada, it added.

Facebook Ireland’s Gareth Lambe said it was still working out how many Irish-based employees would be eligible to take advantage of the policy. Fewer than half of its staff are Irish nationals.

“We’re going to continue to grow aggressively,” he told national broadcaster RTE, citing a move in the next year or two to a new 57,000 square metre campus in Dublin that it intends to fill with 7,000 employees.

“But this is a significant evolution and in the future over the coming years and decades, it is possible that the growth of jobs and numbers may not be as fast in Ireland as it would have been before it.”

Lambe said Facebook’s main Europe, Middle East and Africa decision makers will continue to be based in Dublin, meaning its corporate tax status will not change. However those permanently relocating abroad would no longer pay income tax in Ireland.

Responding to the move, Irish Finance Minister Paschal Donohoe said one of the consequences of the pandemic will be a lot more mobility of workers across national borders but that foreign direct investment will remain “an indispensable part” of Ireland’s economic model.