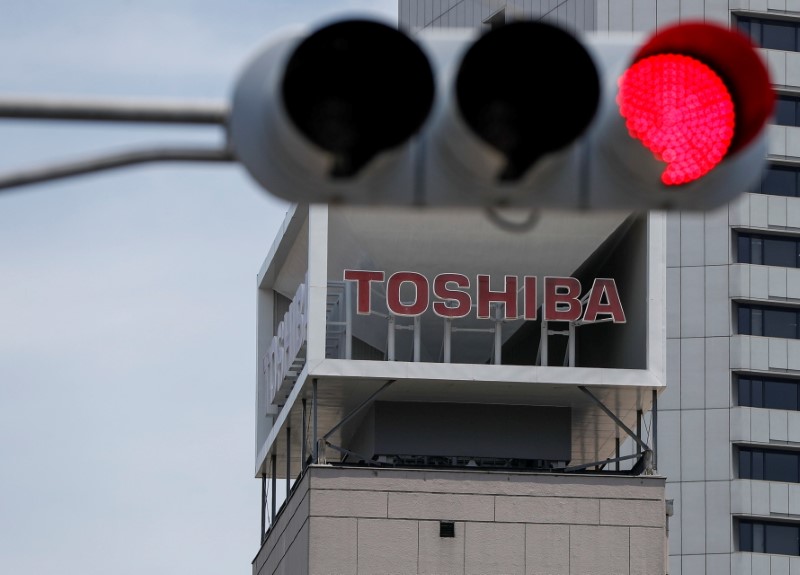 © Reuters. FILE PHOTO: The logo of Toshiba Corp. is seen next to a traffic signal atop of a building in Tokyo, Japan June 11, 2021. REUTERS/Issei Kato

The recommendation by Institutional Shareholder Services Inc (ISS) follows an explosive, shareholder-commissioned investigation that accused Toshiba of colluding with the Japanese government to pressure foreign investors.

The report of that investigation, released on Thursday, revealed how the conglomerate reached out to the Ministry of Economy, Trade and Industry (METI) to get it to “beat up” foreign shareholders.

ISS advised shareholders to oppose the re-appointment of current members of the nomination and audit committees at a June 25 annual shareholders’ meeting.

“One could argue that as the investigation report was just released on June 10, there was no time to change director candidates,” ISS said in its report, published on Saturday and seen by Reuters.

However, it added it was “unthinkable that members of the nomination committee were unaware of the significance of the incident and accompanying shareholder concerns,” as allegations have long been raised, it said.

Glass Lewis, another U.S. advisory firm, has also urged shareholders at this year’s AGM to vote against the re-appointment of the same five directors.