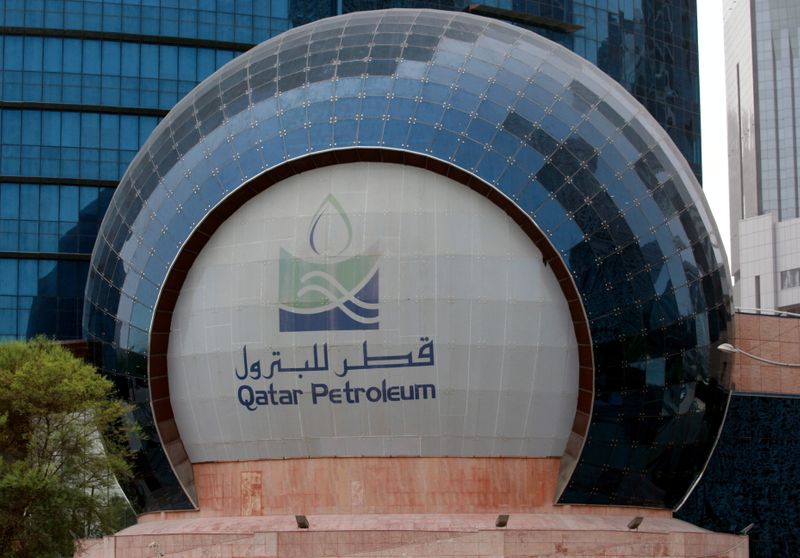 © Reuters. FILE PHOTO: The logo of Qatar Petroleum is seen at its headquartes in Doha, Qatar, July 8, 2017. REUTERS/Stringer/File Photo

By Ron Bousso and Dmitry Zhdannikov

The bids show energy giants continue to have appetite for investing in competitive oil and gas projects despite growing government, investor and activist pressure on the sector to tackle greenhouse gas emissions.

Unlike Qatar’s early LNG projects in the 1990s and 2000s when the country relied heavily on international oil companies’ technical expertise and deep pockets, the country’s national oil company Qatar Petroleum (QP) has gone ahead alone with the development of the nearly $30 billion North Field expansion project.

It is, however, seeking to partner with the oil majors in order to share the financial risk of the development and help sell the additional volumes of LNG it will produce.

“I don’t think QP need the IOCs expertise in the upstream or midstream construction of the project but they will be glad to see someone take some LNG volumes off their hands,” a senior source in one of the bidding companies said.

Qatar plans to grow its LNG output by 40% to 110 million tonnes per annum (mtpa) by 2026, strengthening its position as the world leading exporter of the super-chilled fuel.

An Eni spokesperson confirmed the company is participating in the bidding process. QP, Shell, Chevron, TotalEnergies, Conoco declined to comment.

Exxon said it did not comment on market rumours, but added: “We look forward to continuing success in future projects with our partners Qatar Petroleum and the State of Qatar. ExxonMobil affiliates are working with Qatar Petroleum to identify international joint venture opportunities that further enhance the portfolio of both.”

Leading energy companies see natural gas as a key fuel in the world’s efforts to cut carbon emissions and replace the more polluting coal, although the International Energy Agency said in a report last month that investments in new fossil fuel projects should stop immediately in order to meet U.N.-backed targets aimed at limiting global warming.

Activists say that expansion in natural gas delays a transition to renewable energy that is needed to meet U.N.-backed targets to battle climate change. The European Union is in the midst of a debate about what role gas should take in the energy transition.

The outlook for global LNG supplies tightened sharply in recent months after Total suspended its $20 billion LNG project in Mozambique due to a surge in violence.

It followed a string of delays of LNG projects in North America as COVID-19 hobbled demand last year.

The interest from companies in the Qatari expansion comes despite relatively low returns.

QP offered international bidders returns of around 8% to 10% on their investment, down from around 15% to 20% returns Exxon, Total, Shell and Conoco have seen from the early LNG facilities, according to sources in three companies involved.

“Clearly Qatar has become more competitive,” a source said. “But it remains very low risk from the resource perspective.”

The results of the tender process are not expected to be announced before September, two of the sources said.

In March, QP said it will take full ownership of Qatargas 1 LNG plant when its 25-year contract with international investors including Exxon and TotalEnergies expires next year, in a sign of its growing confidence.