We interrupt focus on the Fed meeting to take a look at some data that might factor into the central bank’s thinking.

Retail sales and producer prices for May both came out this morning, and an initial glance might reinforce impressions that the Fed is less likely to make any policy moves. First a look at the data and then an explanation.

The strong PPI data follow a May consumer price report last week that also was higher than expected, and suggests producers are having to pay up for raw materials. Sometimes this works its way down into higher consumer prices.

for May, however, actually fell 1.3%, much worse than the 0.7% decline Wall Street analysts had expected.

Taken as a whole, the PPI and retail sales data seem to support the Fed’s “transitory inflation” narrative. On the one hand, pandemic-related supply issues and stimulus-related release of pent-up demand have led to higher prices at both the consumer and now producer level. But as those dynamics have essentially run their course, retail sales look to be slipping.

If this is a classic case of “high prices being the cure to high prices,” the inflation numbers could prove to be a temporary phenomenon. That would seem to bolster the case for the Fed’s current policy path, and make it less likely we’ll see any fireworks from the Fed in its post-meeting press conference.

But for now, it looks like we’re in a holding pattern. It feels like a summer type of trade as summer weather hits the Midwest and East Coasts, and that usually means lighter volume and less sense of direction. You don’t typically see a lot of movement one way or the other going into a Fed meeting, either.

The “memes” have been active again early this week, and this morning finds itself back above $40,000. There’s an element of the market out there looking for volatility anywhere they can get it. And continues to rise, now near $71.50. Other commodities are up just slightly so far today, with crude still leading the way.

Tech Earnings Ahead As Mega-Caps Start To Stir

The Fed and today’s inflation and retail sales data might suck a lot of air out of the room this week, but some oxygen remains for a couple of Tech earnings. There’s Oracle (NYSE:) later today and Adobe (NASDAQ:) expected on Thursday, for instance.

ORCL is kind of an interesting stock. It’s not sexy, but it can be a good barometer of how the cloud business is going and even give a hint on the possible progress of competitors like Salesforce (NYSE:). One thing about ORCL is it can give a great indication not just of what’s going on in the U.S., but worldwide, since the company has a broad exposure to international markets.

ADBE approaches earnings flying high so far in June, up about 10% for the month after another strong day on Monday. Shares might have gotten some help yesterday from a couple of positive analyst notes, including one that put its price target above $600. ADBE closed near $557 yesterday.

Generally, the Tech sector dominated to start the new week, continuing what’s been a solid month so far and helping send the to a new record high Monday above 14,000 (see chart below). As we’ve said, the tug-of-war between so-called “growth stocks” like Tech and “value stocks” like Financials and Materials continues and might for a while. We’re halfway through June, and Tech seems to be running well ahead for the moment.

That could change quickly, of course, but strong showings yesterday from Tech behemoths Tesla (NASDAQ:), Microsoft (NASDAQ:) and Apple (NASDAQ:) helped kick things into higher gear after a good performance for the sector last week. Basically, if growth is really going to get back to leading the market, it’s probably not going to happen without participation from the mega-caps like AAPL and MSFT, both of which have been range-bound for weeks. Their heavy weightings in the sector tend to swing more influence than smaller companies.

Tech took yesterday’s checkered flag in the sector race, while Financials continued to struggle amid worries about lower Treasury yields. In fact, if you look at how things worked out yesterday with energy, financials and materials all taking it on the chin, you could make the argument that inflation might be scaring people a bit less as the Fed meeting approaches.

The rise in growth stocks over value was particularly interesting to see Monday considering the jumped four basis points to 1.5%, which is sometimes an indicator of more inflation concern. Maybe we’re just seeing a bit of consolidation in bonds after they rallied so sharply earlier this month. Profit-taking ahead of the Fed meeting might explain some of yesterday’s bond market action.

Getting back to the sector situation, it was Tech that took a beating earlier this year when inflation worries began, while “value” sectors like Materials that tend to benefit from higher commodity prices and Financials that tend to go up when yields rise had a powerful rally. The tide might be starting to turn. For how long, it’s hard to say, and may depend partly on the Fed’s tone tomorrow. That includes both its press release and Chairman Jerome Powell’s press conference soon after 2 p.m. ET Wednesday.

Going into the Fed meeting today, analysts mainly expect a reiteration of the Fed’s previous statements about inflation being transitory and the job market still needing more support.

There’s a growing consensus among many analysts that any announcement about a possible tapering of stimulus would be more of a late-summer or early-fall event. CME futures show only a 7% chance of any rate hike this year, down from 10% a month ago. Now the debate is whether the first hike is a late-2022 or an early-2023 event, but both are so far off it’s not really something you’d expect the market to trade on, yet.

What could make tomorrow’s Federal Open Market Committee (FOMC) meeting more interesting is that it’s one of four meetings a year where the Fed releases its economic projections, meaning we’ll get an update on anticipated economic growth and inflation.

Back in March, the Fed projected 2021 gross domestic product growth of 6.5%, and an unemployment rate of 4.5%. It also pegged personal consumption expenditure (PCE) prices to rise 2.4% overall and 2.2% for the core reading that strips out energy and food prices. PCE is an inflation reading the Fed has said it monitors closely. 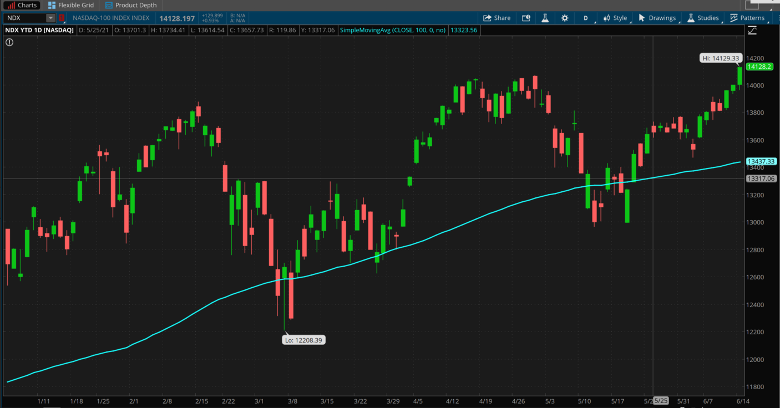 CHART OF THE DAY: IT’S A RECORD! The Tech-dominated Nasdaq 100 (NDX—candlestick) set a new record high Monday for the first time since April as mega-caps like Apple (AAPL) and Microsoft (MSFT) had nice days and investors looked ahead to Oracle (ORCL) and Adobe (ADBE) earnings. The NDX had edged below its 100-day moving average (blue line) last month, but didn’t seem to find a great deal of selling interest down there and has charged back in the weeks since. Data source: Nasdaq. Chart source: The thinkorswim® platform. For illustrative purposes only. Past performance does not guarantee future results.

More Fed Thoughts: Looking ahead to tomorrow, it would be very surprising not to see the Fed’s PCE inflation estimate rise quite a bit, but how high is the question. Inflation now is well above the Fed’s long-term 2% target, according to last week’s consumer price index that showed a 5% year-over-year increase, but Powell said at his last press conference that the Fed is willing to let inflation run hot if the jobs picture hasn’t fully recovered from the pandemic (and it hasn’t).

“Dot Plot” In Focus As Fed Meets: Tomorrow’s meeting also includes updates in Fed officials’ rate projections for the coming years. The March meeting’s so-called “dot plot” of rate projections showed only four Fed officials predicting a rate hike in 2021 and seven seeing one before the end of 2022, with the majority seeing rates staying at the current level of flat to 0.25% through the end of next year. Investors will probably be watching those dots closely tomorrow to see if there’s any sign of the Fed getting more hawkish.

If so, that might help the dollar, which seems to have stabilized right above psychological support at 90 for the . It had fallen below 90 recently for the first time since early this year, and any dovish talk from the Fed might help send it lower again. Generally the dollar weakened after the last meeting, a trend that could help U.S. exporting firms.

VIX View: Checking ahead, futures for the late summer and early fall months are currently priced above 20 despite the front-month being below 16, meaning the market remains in contango (with later months higher than nearer ones), but not at levels that would scare the children, so to speak. Especially when you consider 20 is the historic average for VIX and even the October futures aren’t far above that. From these numbers, it doesn’t look like traders are building in much of a chance of any sort of summer turbulence. Remember, though, that volatility can change very quickly and very dramatically. One school of thought suggests that low volatility itself can sometimes be an indication that higher volatility might be on the way. Remember, the historic average for VIX is around 20, and it went above 80 briefly last year when the pandemic slammed markets.