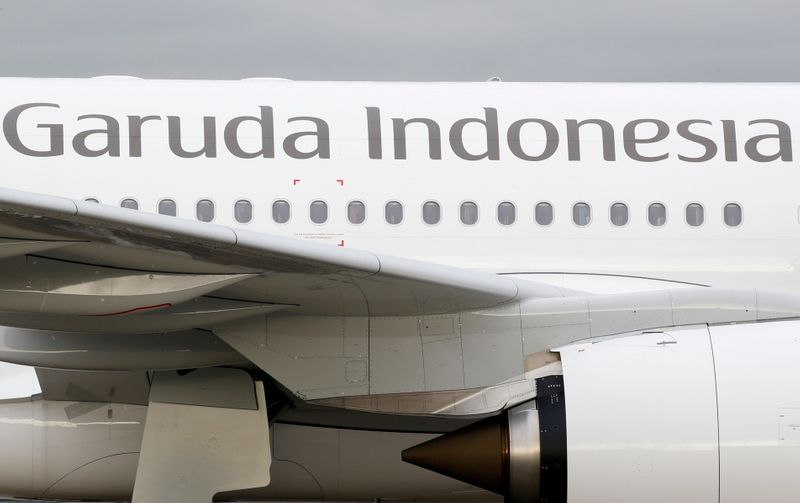 © Reuters. FILE PHOTO: The logo of Garuda Indonesia is pictured on an Airbus A330 aircraft parked at the aircraft builder’s headquarters of Airbus in Colomiers near Toulouse, France, November 15, 2019. REUTERS/Regis Duvignau/File Photo

JAKARTA (Reuters) – Flag carrier Garuda Indonesia, which last week defaulted on a $500 million sukuk, is considering a court supervised debt restructuring process and is in talks to slash its fleet size, company executives said on Monday.

A deputy minister of state-owned enterprises said earlier this month the state-controlled airline’s total debt is about $4.5 billion and it runs a $100 million negative cashflow a month due to high costs and low revenues during the coronavirus pandemic.

Garuda, which has been seeking a suspension on payments for most liabilities, is now considering whether to negotiate its mounting debt in or out of court, Chief Executive Irfan Setiaputra told a parliamentary hearing late on Monday.

However, he noted that while bringing the matter to a commercial court could bring about a quicker agreement with creditors, there is a risk of not reaching a solution and the court could declare Garuda bankrupt.

“Garuda must have a solid plan because … creditors must be convinced that if they sacrifice their claims, they know that Garuda will sustain for longer time,” he told MPs in a hearing streamed online, during which sound was often muted due to the sensitive nature of the information.

The pandemic has forced the airline to shut some flights, with average passenger numbers per flight also down significantly. These included unprofitable routes such as Jakarta-Osaka, and will include flights to Melbourne and Perth next month, Irfan said. The company is also reviewing an Amsterdam flight.

The airline currently only flies 41 planes of the 142 in its fleet, Dony Oskaria, the firm’s deputy chief executive officer, told the same hearing. It has returned 20 planes to lessors and is in negotiation to return seven more, he said.

“The negotiation process is not easy. We want to return 101 planes but it will take time,” Dony said, adding the company is currently negotiating schemes for early termination, lease holiday or pay-by-the-hour.

Garuda also presented to parliament a five-year business plan from 2022, which includes a goal for positive EBITDA and a fleet of 66 planes. The plan assumes a turnaround period starting from the second half of this year.

The airline also wants to keep a workforce in accordance with its number of planes. Garuda employed more than 7,800 before the pandemic, but it has now terminated 2,300, according to a document submitted to MPs.

Electronic Arts Gets A Bump

The Important NFP Of The Year