While you never want to spike the ball on the five-yard line, the stock market has a green tint this morning amid news of progress on an infrastructure deal. It’s got the market excited and is probably the main impetus for stocks being up so much overnight.

Obviously, people have had their infrastructure hopes dashed many times and this might end up being another. For now, the news might help power some of the cyclical sectors like Industrials and Materials that conceivably would benefit from billions of dollars in government spending on highways, railroads, airports, and other infrastructure-related projects.

This morning also brings the latest updates on jobless claims and gross domestic product. Later today, investors will get a look at earnings from Nike (NYSE:) and FedEx (NYSE:), followed by another read on inflation tomorrow.

disappointed for the second week in a row at 411,000, well above Wall Street’s consensus estimate of 380,000. Progress here appears to be flatlining a bit after weeks of the numbers falling. That’s not bullish heading into next week’s monthly payrolls report.

On gross domestic product, the government’s final Q1 estimate stayed at 6.4%, so no major surprises there.

Life Moves Pretty Fast, And So Does Market Narrative

It’s amazing how quickly the narrative changes in this market. Last week at this time there was a wall of worry around the Fed, and this week there’s a feeling that “all is good” and we’re on the verge of setting records. It shows you there isn’t a great deal of conviction either way and how investors need to be careful. More than ever, if you’re trading this market you need to have your plan and know the timeframe of your investments and your risk tolerance.

The biggest debate in the market is if inflation is transitory or permanent. As that debate plays out and more data arrive, it wouldn’t be surprising to see the current pattern of equity market trading without great conviction continue until earnings start in mid-July.

Remember, too, that in the period we’re in with the last Fed meeting receding and earnings still weeks ahead, data in the coming days might not get the same kind of attention as it would right before a Fed gathering. The exception, of course, is next Friday’s June payrolls report, which we’ll discuss a lot in the near future.

Earnings season doesn’t officially kick off for a few weeks, but the earnings landscape briefly gets more cluttered after the close today. NKE and FDX lead the charge as they both prepare to open their books. We discussed NKE a bit yesterday, so let’s turn to FDX.

FDX had a solid quarter last time out, assisted by volume gains in its U.S. domestic residential package and international priority services, as well as pricing initiatives. Strong economic growth so far this year could provide a tailwind for the package company.

Meanwhile, air passenger traffic is starting to perk up a bit, which might mean more cargo capacity putting pressure on pricing power, analysts say. FDX might get asked on its call about its rate of on-time delivery, and also its projections for any change in fundamentals based on more people getting back to work instead of working from home.

The crude rally continued earlier this week even though prices have now drawn back a bit from Wednesday’s intraday three-year highs above $74 a barrel. Reports that OPEC and Russia might be considering a little more production could be weighing on crude this morning as prices fell below $73.

Looking back at yesterday’s Wall Street action, it was about as exciting as watching beige paint dry. The Tech stocks tended to do best, along with small-caps. There’s really no pattern to this, with cyclicals and growth areas like Tech trading places over and over the last few weeks.

Low volume was a feature yesterday, and technically it was another disappointment for the bulls as the failed for the second consecutive day to take out the old high of 4257. There’s nothing super-magic about that particular level, but buying just seemed to dry up the last two sessions when investors saw the record high approaching.

Lack of a major rally or downturn in the big indices could speak to a pattern sometimes seen when there’s been a Fed meeting and earnings lie straight ahead. The Fed has been the story the last couple of weeks, and we do get what could be interesting earnings from FDX and NKE later today, but overall we’re out of the earnings cycle. People start looking for something to trade but there’s no big story, so you see more individual stocks having good or not so good days.

People are potentially looking for an earnings story that can make them want to own a particular stock over the long-term, or maybe they want some momentum into earnings with a stock but not necessarily past that.

Right now we’re in a pattern where some of the biggest stocks, like “FAANGs,” are doing well. Overall, though, fewer stocks are doing better in the Nasdaq (COMP:GIDS). As an investor, you have to decide if a rising tide will eventually lift all boats or not. Because these big stocks can keep doing well for a few weeks or months, but at some point they’ll lose momentum and the question is whether they bring smaller companies along for the ride before running out of steam.

Besides today’s initial jobless claims, there’s key inflation data due tomorrow with May Personal Consumption Expenditure (PCE) prices. That’s a report the Fed follows closely. As we noted yesterday, consensus on Wall Street is for a 0.6% rise in core PCE prices, down from 0.7% a month earlier but still expected to be up sharply from a year ago. Also tomorrow morning, University of Michigan consumer sentiment is on tap.

Today’s GDP data is a final look back at Q1. More important now is what to expect for Q2, even though the first government estimate is weeks away. The Atlanta Fed’s GDP Now indicator recently pointed to 10.3% growth in Q2, but that gets updated today. One question is whether the estimate might tip a bit lower due to the recent soft housing data. 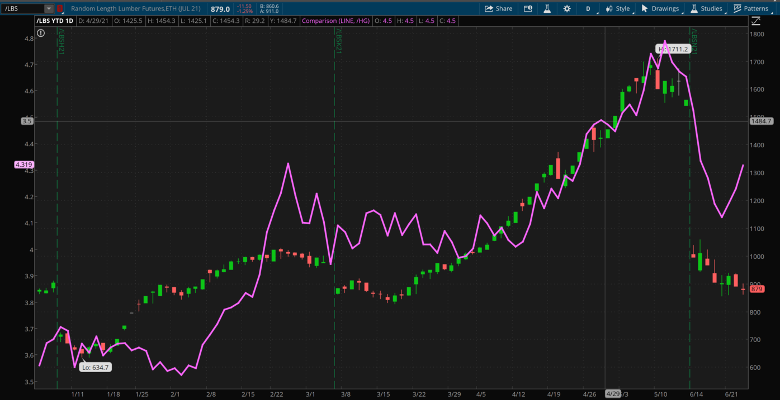 CHART OF THE DAY: BREATHER FOR COMMODITIES. At least some commodities, including lumber futures (/LBS—candlestick) and (/HG—purple line) have come down sharply from recent highs, though copper did tick up a bit this week. Data Source: CME Group (NASDAQ:). Chart source: The thinkorswim® platform. For illustrative purposes only. Past performance does not guarantee future results.

Checking the Mid-Year Scorecard: It’s almost mid-year, meaning it might make sense to take a look at the current standings. The SPX has had a pretty good start to 2021, even if it’s been kind of flat since mid-April. Its nearly 13% gains through Wednesday would represent a great full year, and we’re not even half done. Energy leads all S&P sectors with an amazing 43% gain, which only partly reflects how battered down that sector had been for years even pre-COVID.

All that doesn’t necessarily mean a thing for the road ahead, obviously, but it might show that strong Q1 earnings actually translated to market gains. Many analysts look for even better Q2 earnings growth, but the year-over-year comparisons could be pretty easy due to the pandemic last year, so it’s unclear how much investors will reward companies for participation.

With 10.8% gains for the year, the Tech-heavy has caught up a bit with the SPX over the last few weeks. Earlier in 2021, relative weakness in tech stocks perhaps reflected investors’ bigger appetite for so-called “value” stocks over growth, a tug-of-war that continues to play out and might keep going for a while. Energy, Financials, Materials, and Industrials are some of the “cyclical” sectors driving the value emphasis, all of them outpacing Info Tech year-to-date. It’s a major change from the 2017–2020 period when Tech led and everyone else kind of wobbled along. The growth vs. value tug-of-war doesn’t show any signs of winding down yet, by the way.

Let’s Get Small: Meanwhile, the Index of small-caps leads everyone with 16.6% gains, though that’s down a bit from where it was a couple of weeks ago. Its strength doesn’t seem too surprising considering the old adage that smaller stocks, which tend to have a more domestic focus, often do well in a recovering economy. Also, the “meme” stock rally that catapulted shares of smaller companies like GameStop (NYSE:) and AMC Entertainment (NYSE:), which helped RUT. So has strength in financials, and more recently in health care. All those sectors have relatively heavy weightings in the RUT index.

Overseas, the European stock markets have been keeping close pace with the SPX, up about 13% so far this year. In China, stocks continue to struggle, up less than 3% year-to-date for the major Chinese index.

Timber! Lumber Getting Chopped: Lumber futures fell again Wednesday and are off about 45% from their 2021 peak. Lumber prices are now below $900 per thousand board feet after spending months above $1,000. A surge of new production at sawmills helps account for the recent price weakness, and the high prices we saw the last few months might have taken demand down a few notches. New home sales appear to be getting “squeezed” by high costs for builders and high prices for buyers, Briefing.com noted.

If you look farther out in the lumber futures market, prices for contracts in the months ahead are actually lower than the current contract, a situation called “backwardation.” This can mean the market anticipates continued weakness. Crude currently trades the same way, with CME futures pointing toward prices dropping into the high $60s per barrel by late this year and even lower in 2022. Though that could definitely change, the futures market for crude and lumber, two of the most volatile commodities of the year, don’t appear to tell an inflationary story.

Southwest Airlines CEO Gary Kelly to step down By Reuters