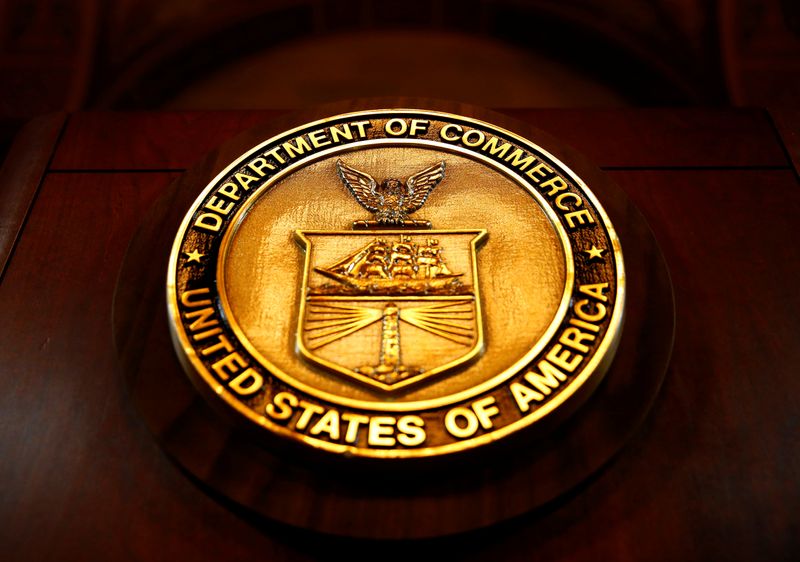 © Reuters. FILE PHOTO: The seal of the Department of Commerce is pictured in Washington, D.C., U.S. March 10, 2017. REUTERS/Eric Thayer

By David Lawder and David Shepardson

WASHINGTON (Reuters) – The Biden administration said Thursday it banned U.S. imports of a key solar panel material from Chinese-based Hoshine Silicon Industry Co, but stopped short of imposing a ban on all imports of silica from Xinjiang and said the action would not harm U.S. clean energy goals.

The Commerce Department separately added five Chinese entities to the U.S. economic blacklist over forced labor allegations in Xinjiang — including Hoshine. The White House cited the G7’s recent pledge to clean up the global supply chain as part of its actions.

“Our environmental goals will not be achieved on the backs of human beings in a forced labor environment,” Mayorkas said at a press briefing. “We’re going to root out forced labor wherever it exists.”

The import ban covers products made overseas that use Hoshine materials, including any solar panels produced abroad with polysilicon from Hoshine.

China’s Foreign Ministry has said it will take all necessary measures to protect its companies’ rights and interests.

Hoshine Silicon Industry said on an interactive investor platform that it backed the Chinese foreign ministry’s reaction, adding that the firm does not export industrial silicon to the United States directly and the impact on its business would be limited.

Asked whether the Hoshine ban could be expanded into a region wide ban on all polysilicon from Xinjiang, Mayorkas and CBP officials downplayed any similarities to the agency’s recent region-wide import bans on Xinjiang-produced cotton and tomato products over forced labor.

Anna Hinojosa, CBP’s executive director for trade remedy law enforcement, declined to comment on where the agency’s polysilicon investigations might lead, but any expansion would depend on the substantiation of evidence that forced labor is being used.

Hinojosa said CBP identified $6 million of direct imports from Hoshine and $150 million of downstream products using Hoshine materials over the past 2.5 years.

The United States is restricting U.S. exports of “commodities, software, and technology” to Hoshine, three other Chinese firms and the paramilitary Xinjiang Production and Construction Corps (XPCC), saying they were involved with the forced labor of Uyghurs and other Muslim minority groups in the Chinese province.

John Smirnow, general counsel and vice president of market strategy at the Solar Energy Industries Association, the main U.S. solar industry association, said the group fully supports “the Biden Administration’s efforts to address any forced labor in the solar supply chain. The fact is, we do not have transparency into supply chains in the Xinjiang region, and there is too much risk in operating there.”

Polysilicon analyst Johannes Bernreuter with Germany-based Bernreuter Research said the CBP order could have a broad impact on the U.S. solar industry.

According to a report on Thursday from the Washington-based Peterson Institute for International Economics, China accounts for nearly half the global production of polysilicon “from the massive amounts of energy used in the refining process and Xinjiang’s low, albeit carbon-intensive, energy costs,” not because of the availability of the raw material, noting that silicon is among the most abundant minerals on earth.

Beijing has dismissed accusations of genocide and forced labor in Xinjiang as lies.

Chinese Foreign Ministry spokesman Zhao Lijian, reacting to earlier reports of the U.S. action, said on Thursday that China would take “all necessary measures” to protect its companies’ rights and interests.

Several of the companies are major manufacturers of monocrystalline silicon and polysilicon used in solar panel production.

The White House said the entities’ practices ran counter not only to American values but also tipped the scales against U.S. workers “by exploiting workers and artificially suppressing wages.”

Xinjiang Daqo New Energy Co, in an email to Reuters, said it had “zero tolerance” towards forced labor, and does not directly sell or buy from the United States so there would be no “significant impact” on its business.

The other companies or their parent firms, including XPCC, did not to requests for comment, or could not be reached.