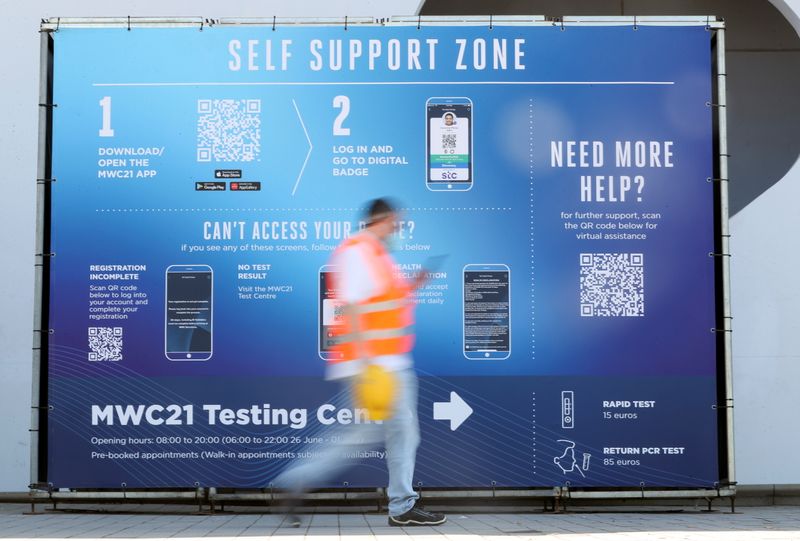 © Reuters. FILE PHOTO: A worker walks past a sign ahead of the Mobile World Congress (MWC) at Fira de Barcelona, in Barcelona, Spain June 25, 2021. REUTERS/Albert Gea

BARCELONA (Reuters) – The great and good of the mobile communications world have flocked to their annual jamboree in Barcelona, all armed with this year’s must-have tech: a negative COVID-19 test, an FFP2 face mask and a digital badge for contact-tracing.

Over 30,000 visitors from 143 countries are set to stream into the Catalan city for the three-day Mobile World Congress, or MWC, which starts on Monday – and each will have to pass through a mammoth testing area complete with 80 booths.

While that attendance is a far cry from the crowds of 100,000-plus in years gone by, it is nonetheless encouraging for the organisers, global mobile industry body GSMA. It was forced to axe the 2020 event as the pandemic raged, and had feared few people would show up this week.

“My biggest worry was that … our exhibitors would say with one voice ‘We’re not coming’ – but that’s not happened,” said Mats Granryd, director general of GSMA, which took big losses after last year’s cancellation, laying off 40% of its staff.

“These different variants are going to be here for the foreseeable future, and we just have to start living with it.”

It’s been a mixed picture among the big industry names. The likes of Telefonica (NYSE:), Orange, Huawei, Lenovo, Vodafone (NASDAQ:) are showing up; but Ericsson (BS:), Nokia (NYSE:) and Samsung (KS:) are staying away.

The industry hopes that this year’s event, split between physical, virtual and hybrid activities, will provide a blueprint for future business gatherings.

At a warm-up reception at Barcelona’s La Boqueria market on Sunday, MWC guests and stakeholders networked eagerly, greeting one another with elbow or fist bumps, keen to throw off a year of isolation, lockdowns and video-conferencing.

“This (MWC) marks a before and an after,” Carme Artigas, the Spanish government’s digitalisation and AI chief, said at the lunch. “It’s the starting shot for us to relaunch our economy’s growth.”

The scale of the testing operation is daunting, though.

On Saturday alone, 10,000 people were tested inside the huge Fira venue that hosts MWC, as preparations were being made for the event – a process that Granryd described as “smooth”. 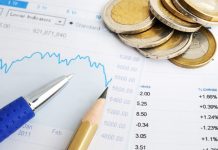