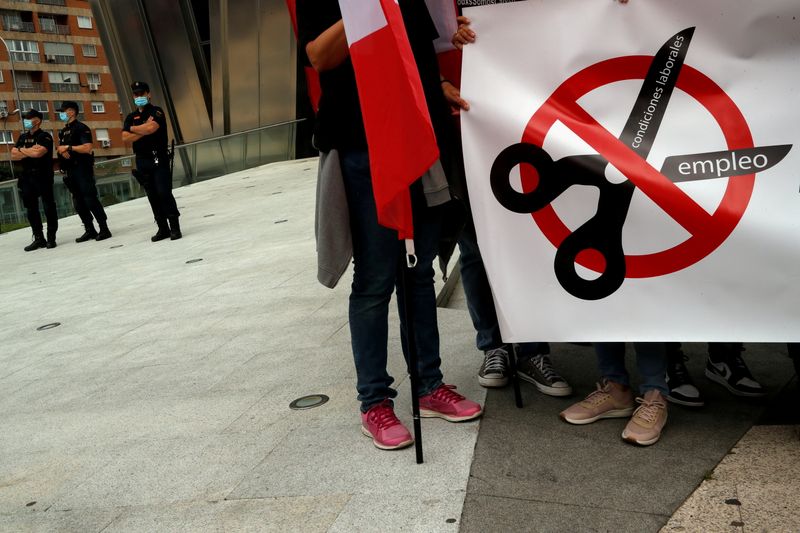 MADRID (Reuters) – Spain’s Caixabank said it has offered to reduce its proposed job cuts by more than 1,500 to 6,750 as thousands of staff took part in another one-day strike on Tuesday.

Employees also protested in around 30 cities across Spain at the layoff plans, a spokesperson for Comisiones Obreras (CCOO) said, after Caixabank presented its latest offer to unions.

Caixabank said in April after it bought Bankia that it was planning to cut 8,291 jobs, one of the largest such culls in Spain, to adapt to clients moving online.

It has now offered to reduce that to 6,750, from 6,950 a week ago, while also improving compensation for those who leave the bank, Caixabank said in a statement.

Reaching an agreement with the unions is a key aspect of the Bankia deal, which is underpinned by annual cost savings of 770 million euros ($916 million) by 2023.

The CCOO wants any cuts to be made through voluntary redundancy and says layoffs should be limited to 6,300.

It is also calling for greater financial compensation.

The CCOO spokesperson said it was still too early to give an assessment of the bank’s latest offer as talks, which had been expected to conclude on Tuesday, were ongoing.

CCOO said 90% of Caixabank’s 5,552 branches in Spain were shut by the strike, although neither the bank nor CCOO said how many of its around 44,000 employees had taken part in it.