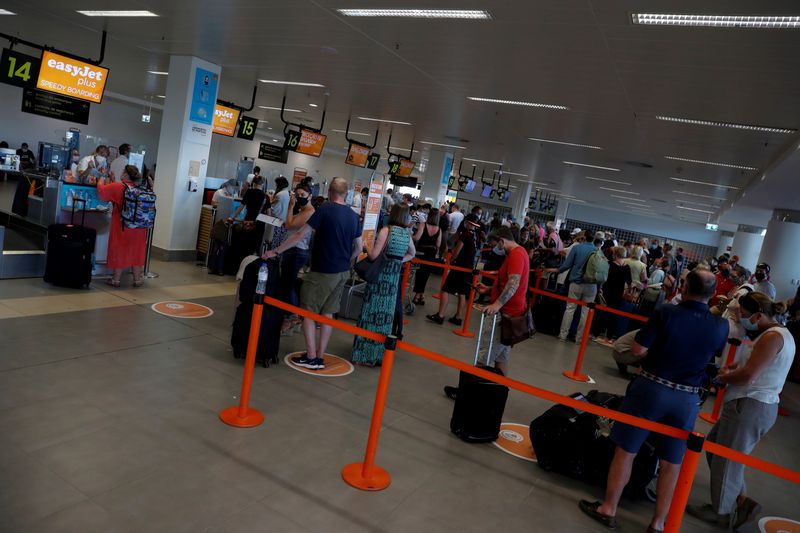 DUBLIN (Reuters) – Groups representing Europe’s largest airlines and airports have warned of chaos and hours-long queues unless countries better coordinate the roll-out of the EU’s digital COVID-19 certificate and ensure passengers are processed before arriving at airports.

The European Union’s system of digital COVID-19 travel certificates is due to come into force on Thursday, but airports group ACI and airlines representative bodies A4E, IATA and ERA warned in a letter to EU national leaders of a “worrying patchwork of approaches” across the continent.

“As passenger traffic increases in the coming weeks, the risk of chaos at European Airports is real,” the groups said in the joint letter sent on Monday and seen by Reuters.

The digital certificates are designed to show, via QR codes, whether passengers are fully vaccinated, have immunity due to recent recovery from COVID-19 or have had a negative test.

They are designed to be used for travel throughout the EU from July 1, but would require extra checks and the right equipment to read the codes.

The letter said the only way to avoid huge queues and delays during the peak summer season was to implement a system whereby both the vaccination certificate and passenger locator forms are processed remotely before the passenger arrives at the airport.

Checks must only take place in the country of departure and not on arrival and national governments should manage the health data and provide equipment to check the QR codes, the letter said.

“A high level of fragmentation and differences in the implementation of the DCC … as well as continued duplication of document checks in several states is alarming,” it said.

ACI Europe Director General Olivier Jankovec, one of the signatories, said his airport members were “getting very concerned”.

“Coping with this increase is going to be an unprecedented challenge”,” he said. The amount of verification still being done manually at airports was making him “very, very nervous,” he added.

The amount of time navigating airports during a journey has doubled to 3 hours from 1-1/2 hours before the pandemic, said IATA’s European Vice President Rafael Schvartzman, another signatory.

If no changes were made and capacity returned to pre-COVID levels, that could theoretically increase to an unacceptable five or even eight hours, he said.

Ahead of a meeting of European countries on the digital certificate on Tuesday, the European Commission issued guidance for member states that echoed some of the concerns, noting that 10 different combinations of checks were being planned by various countries.

This risks leading to “unnecessary duplication of measures and as a consequence to queues and crowding at airports.”

Chart Of The Day: Why We’re Contrarian On ESG Darling, Vertex...