The current year has been quite unsettling for some of the world’s largest chip-makers. After widespread supply-chain disruptions during the pandemic, they struggled to meet the soaring demand for chips, which are used in smartphones, data centers and automobiles.

The supply shortage that forced some car manufacturers to close their plants is likely to persist, but there are signs that it might not get worse, helping some companies to either meet or exceed their financial targets.

Micron Technology (NASDAQ:), the largest US maker of memory chips, yesterday gave a revenue forecast for the current quarter that was in line with analysts’ projections, indicating it will be able to meet demand for its semiconductors that store data in computers and phones.

Demand was strong across all of the company’s markets amid some disruptions to supply caused by pandemic-related lockdowns in Malaysia. With strong demand, Micron also reported a jump in prices for its two main products.

In the fiscal fourth quarter, gross margin will be 46%, plus or minus 1%, and in line with analysts’ projections, Micron said. Micron shares have lagged the benchmark this year. Its stock was up 7% this year against the 18% surge in the main index. 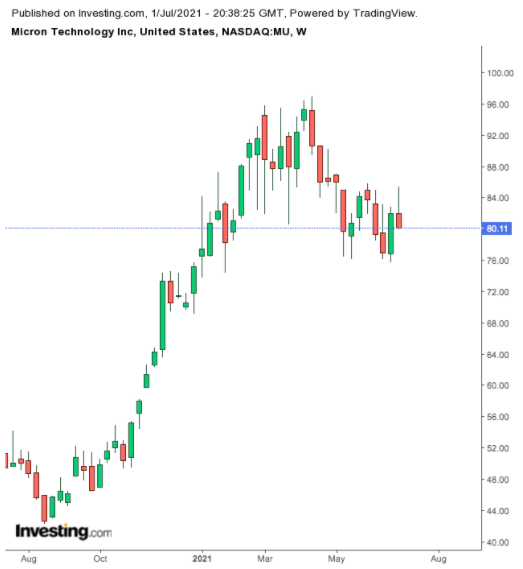 The main reason behind this underperformance is the concern that the company could see cost escalation and a slowdown in demand for chips used in laptops as people go back to offices after more than a year of working from home. There is also unease that smartphone makers in China have growing unused stockpiles of components. Micron yesterday, however, dispelled that impression.

“While the pandemic remains a risk factor, CY21 [calendar year 2021] is shaping up to be a strong year fuelled by the macroeconomic recovery combined with secular drivers, such as AI and 5G, that are creating sustained demand increases across broad end markets,” CEO Sanjay Mehrotra said in a statement.

Before Micron’s earnings, some of the largest Wall Street banks have produced very bullish notes on the chip industry, citing the global shortage that will bring fatter margins. Analysts at Bank of America (BofA) said in a recent note that the market has underestimated how long rising demand for chips would last.

“The combination of global growth … supply shortages, and rising cost/complexity of chip-making is likely to extend industry growth into 2H21 [the second half of 2021] and CY22,” BofA’s analysts said.

New 5G smartphones, advanced autos and gaming products are all being developed simultaneously, raising the demand for chips over 2021 and into 2022, BofA added. The bank, which has Applied Materials (NASDAQ:), Marvell (NASDAQ:) and NXP Semiconductor (NASDAQ:) as some of its top picks from the industry, raised its global forecast for the semiconductor industry as a whole to $532 billion in 2021—up 21% year-on-year, compared to a previous estimate of a 16% increase.

Micron earnings, which were released ahead of the second-quarter earnings season, show that demand for chips remains strong and the semiconductor companies will continue to benefit from this trend this year.