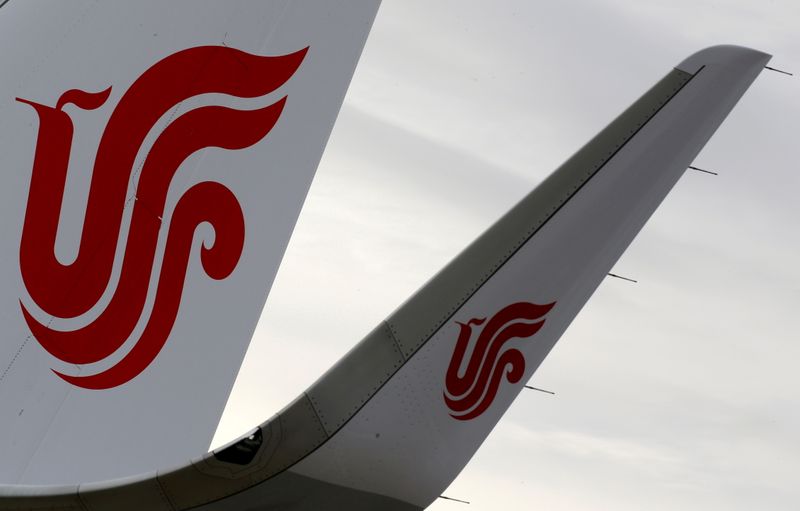 © Reuters. FILE PHOTO: The logo of Air China is pictured on a tail of an airplane parked at the aircraft builder’s headquarters of Airbus in Colomiers near Toulouse, France, November 15, 2019. REUTERS/Regis Duvignau

BEIJING/SYDNEY (Reuters) – China’s aviation regulator is likely to keep the current tight caps on international flights throughout the first half of 2022, analysts cited Air China (OTC:) as saying this week.

The move has broad implications for tourism in the Asia-Pacific region, where Chinese outbound travellers normally play an outsized role, though other countries have also been slow to open borders because of relatively low vaccination rates and rising COVID-19 cases.

The Civil Aviation Administration of China (CAAC) last month said that weekly international flights were at only 2% of 2019 levels, as more flights were suspended amid a rising number of imported COVID-19 cases.

China’s three biggest airlines, Air China, China Southern Airlines and China Eastern Airlines (NYSE:), said in their earnings calls that CAAC’s restrictions on international flights may continue until the first half of 2022, given the government’s COVID-19 prevention approach around the Beijing Winter Olympics in February, Parash Jain, head of shipping, ports and Asian transport research at HSBC, said in a note on Wednesday.

This would push a full recovery further out to 2024, Jain added.

Expectations of a delayed recovery in international travel have partly led some analysts to lower earnings forecasts over the next few years. China Merchants Securities, for example, cut their estimates for net profit for Air China to -9 billion, 2.7 billion, and 6.7 billion yuan in 2021, 2022, 2023.

Air China management told analysts that the recovery of China’s outbound travel would be slower than that in the United States and Europe, adding that the vast majority of developing countries have not achieved high vaccination rates.

They added CAAC was not expected to loosen restrictions until after the first half of 2022.

Chinese airlines do not hold a media call on results, but two analysts briefed Reuters on what was said, speaking anonymously because they were not authorised to comment beyond notes to clients. Air China and CAAC did not respond to a Reuters request for comment.

The CAAC has the tweaked the policy with flight suspensions or capacity caps for airlines if a certain number of passengers are found to have been infected with COVID-19, or adding flights if an airline does not import any cases.