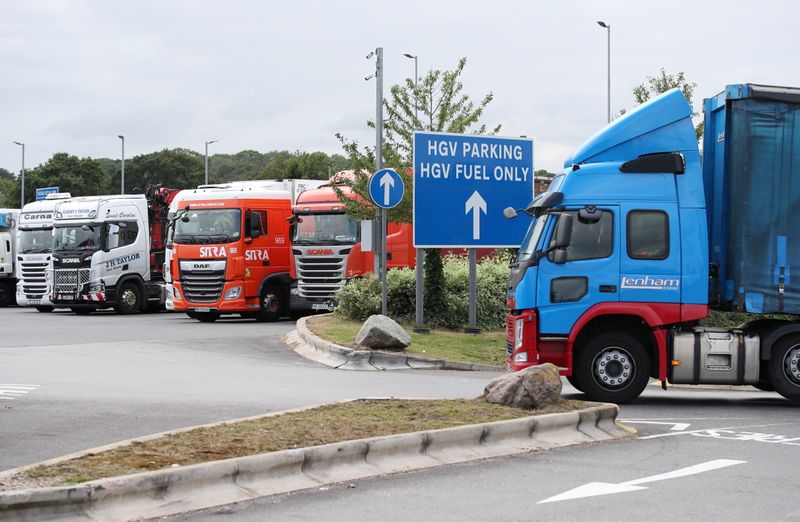 LONDON (Reuters) – Two furloughed jumbo jet pilots and a burnt-out finance worker have been among the more unusual candidates to learn how to drive 44-tonne trucks at Laurence Bolton’s school in south London during the pandemic.

“You get people from all industries, and think: ‘Blimey, I never saw you here before 2020’,” Bolton said. “There are more people that have been displaced from retail, with the high street closing or certainly running down, and from hospitality.”

Business is brisk for truck driving schools as Britain emerges from its COVID-19 crisis. The country is facing an acute shortage of lorry drivers, and haulage companies are raising starting salaries and offering sign-on bonuses to entice candidates in the post-pandemic economy.

Bolton, managing director of the National Driving Centre, said he had seen a 20% rise in the number of people seeking to become truckers compared with before the pandemic.

It’s not enough, though. Britain needs 100,000 more drivers if it is to meet demand, according to the UK’s Road Haulage Association (RHA). The signs are already there: sporadic gaps on supermarket shelves, pubs running low on beer, McDonald’s (NYSE:) suspending milkshakes.

The shortfall, mirrored to a lesser degree in other countries like the United States and Germany, spells potential trouble on the inflation front. Truckers are a central cog in the global economy, carrying almost all our goods. If there aren’t enough of them, it is likely to drive up prices.

Wesley Van Tonder, who delivered food for Uber (NYSE:) Eats and Deliveroo during the pandemic, is among those workers who have sought to change course in the new reality – he has cashed in his motorbike to fund truck-driving lessons at Bolton’s school.

“Now everything is starting to open back up so there’s more people on the road, and on the bike it’s a bit dangerous,” he said. “I’d rather drive a truck.”

The Bank of England expects British inflation to hit a 10-year high of 4% this year. How fast it might fall thereafter depends in part on how quickly people who have lost their jobs in the pandemic switch to sectors such as logistics where workers are badly needed.

But the gap is bigger in Britain, where post-Brexit immigration rules since Jan. 1 have cost the industry 20,000 drivers from the European Union, the RHA told Reuters.

Normally nearly 40,000 people a year pass tests to drive a lorry in Britain, but this fell by almost two-thirds last year at the height of the pandemic when many driving schools were closed for long stretches in an already aging industry.

“We do not have enough fresh blood coming in,” said RHA policy director Rod McKenzie. “Britons will not get the things they want. That is the position we’re in now. And it’s getting worse between now and Christmas.”

This was echoed by Bolton at the National Driving Centre.

“You’ve got to make sure that Amazon (NASDAQ:) deliveries arrive at people’s doors,” he said. “People have the expectation that everything is ‘click to buy’, with the expectation ‘I want it here tomorrow’. But the supply chain can’t cope with it, with the amount of drivers that are left in the industry.”

Britain’s government has rejected industry calls to temporarily ease visa restrictions for EU lorry drivers, and instead told the sector to improve pay and conditions.

The demand has driven up wages: salaries for new drivers in Britain rose by 5.7% between February and July compared with a 0.8% increase across all types of jobs, according to Jack Kennedy, an economist at recruitment website Indeed.

The shortage has also led companies such as Gist, a division of U.S.-German Linde (NYSE:) which delivers food to British supermarkets Tesco (OTC:) and Marks & Spencer (OTC:), to offer 5,000-pound ($6,900) sign-on and retention bonuses.

Yet it’s an industry where trade unions have long criticised pay and conditions.

While the annual salary is roughly in line with the national average, hours are longer and often anti-social – a typical full-time truck driver was paid to work for 47 hours a week, compared with 37.5 hours for the average job.

The sector in Britain is dominated by small haulage companies which operate on thin margins, pressured by big customers in the retail and industrial sectors, according to Adrian Jones, a national officer at trade union Unite.

Unite wants an industry-level agreement on minimum pay rates, as in some other European countries and more regulated sub-sectors such as petrol and chemical delivery.

Big signing-on bonuses from some large employers were not translating into broader pay rises, and instead suggested that they thought the current shortage would blow over, Jones said.

“That’s just a sticking plaster over a gaping wound. That is not a solution to the problem,” he added.

‘I ALWAYS WANTED TO DO IT’

A big question mark for Britain’s central bank is whether the recruitment difficulties mark the start of a longer-term, more broad-based rise in the country’s wages, which have been weak since the 2008 financial crisis.

Deputy Governor Ben Broadbent has highlighted a mismatch between new jobs created during the pandemic in areas such as logistics and IT, and the skills of people in sectors that suffered such as high-street retail and hospitality.

However, in an ominous sign for the Bank and inflationary pressures, Indeed economist Kennedy said the flow of new drivers from outside the sector appeared to slow in the three months to June, as job options widened.

For some, though, the lure of the open road is irresistible.

London bus driver Nick Fuller is among those training at Bolton’s National Driving Centre and plans to get a licence to drive an articulated lorry up and down motorways.

He said he couldn’t turn down the prospect of better pay and a bigger vehicle – plus the absence of aggressive passengers.

“I always wanted to do it. But hearing about these labour shortages – yes, maybe it gives me an incentive to get it now rather than later,” the 37-year-old added.

“With lorries, you’ve got no passengers hollering at you or trying to get to you through the cab – and a bit more money to help feed my family as well.”