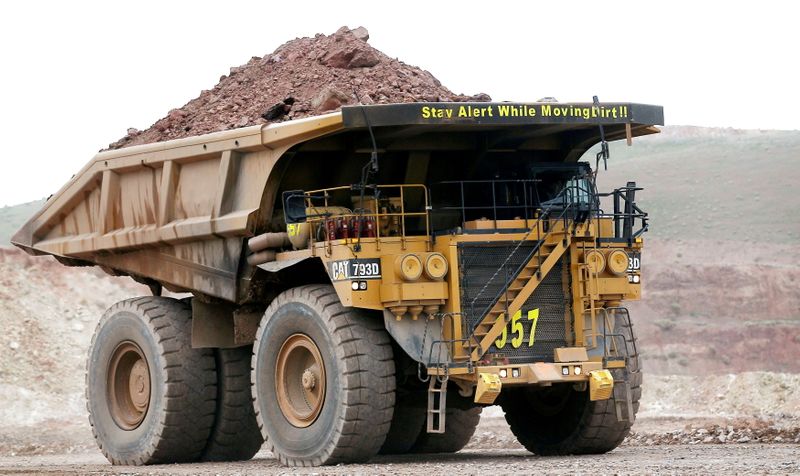 © Reuters. FILE PHOTO: A haul truck carries a full load at a mine operation near Elko, Nevada May 21, 2014. REUTERS/Rick Wilking/File Photo

(Reuters) -A U.S. federal judge ruled on Friday that Lithium Americas (NYSE:) Corp may conduct excavation work at its Thacker Pass lithium mine site in Nevada, denying a request from Native Americans who said the digging would desecrate an area they believe holds ancestral bones and artifacts.

The ruling from Chief Judge Miranda Du was the second victory in recent weeks for the project, which could become the largest U.S. source of lithium, used in electric vehicle batteries.

The court is still considering the broader question of whether former President Donald Trump’s administration erred when it approved the project in January. That ruling is expected by early 2022.

Du said the Native Americans did not prove the U.S. government failed to properly consult them during the permitting process. Du in July denied a similar request from environmentalists.

Du said, though, that she was not dismissing all the Native Americans’ arguments, but felt bound by existing laws to deny their request.

“This order does not resolve the merits of the tribes’ claims,” Du said in her 22-page ruling.

“We’ve always been committed to doing this the right way by respecting our neighbors, and we are pleased today’s ruling recognizes our efforts,” Lithium Americas Chief Executive Jon Evans told Reuters.

No digging can take place until the U.S. Bureau of Land Management issues an Archeological Resources Protection Act permit.

The Burns Paiute Tribe, one of the tribes that brought the lawsuit, noted that the bureau told the court last month that the land holds cultural value for Native Americans.

“If that’s the case, well then there’s going to be harm if you start digging into the landscape,” said Richard Eichstaedt, an attorney for the Burns Paiute.

Representatives for the bureau and two other tribes who sued were not immediately available to comment.