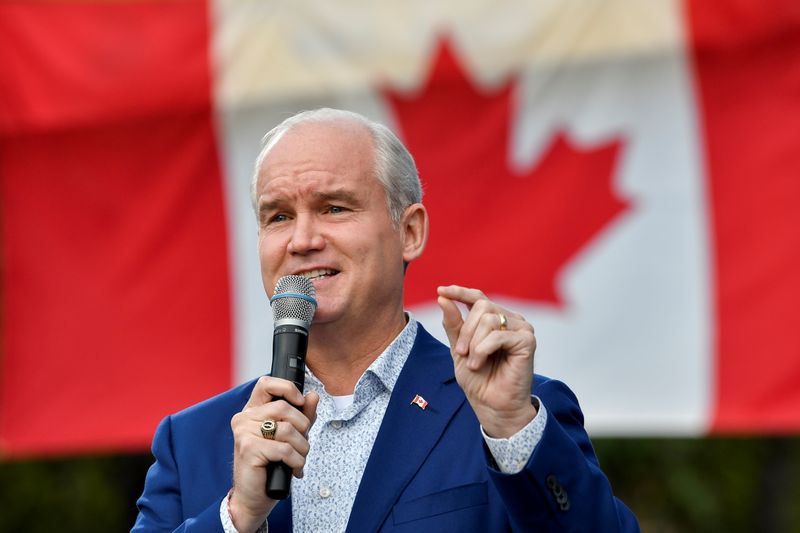 VANCOUVER (Reuters) – The head of Canada’s opposition Conservative Party, who has a chance of beating Prime Minister Justin Trudeau in an election, on Saturday pushed back against charges he plans to weaken gun controls, an issue that could prove costly.

Conservative leader Erin O’Toole has been pressed repeatedly this week over his campaign promise to overturn a 2020 ban on weapons such as the AR-15, used by a gunman to kill 26 adults and children in the U.S. 2012 Sandy Hook massacre.

O’Toole declined to answer the questions directly, noting he plans to keep a separate 1977 ban on assault rifles.

“Erin O’Toole is willing to say anything to Canadians to get elected. He lied to Canadians about his plans to scrap the Liberal ban on assault weapons,” the Liberals said in a statement on Saturday.

Gun control is a sensitive issue in Canada, especially in the wake of a number of high-profile killings. In April 2020 a man killed 22 people in a rampage https://www.reuters.com/article/us-canada-crime-novascotia/nova-scotia-gunman-killed-9-of-his-22-victims-by-setting-fire-to-their-houses-police-say-idUSKCN22A3K6 in the province of Nova Scotia, shooting 13 of them.

Liberal governments have over the years tightened gun control laws, which are stricter than those in the United States. Some Conservatives complain the measures are too restrictive and needlessly penalise farmers and hunters.

“It’s very upsetting to see Mr. Trudeau trying to import American-style politics, particularly on an issue of public safety,” O’Toole told reporters in Vancouver, saying a big problem was weapons being smuggled in from the United States.

O’Toole is also promising a review of how weapons are classified as dangerous in Canada.

The 2020 ban https://www.reuters.com/article/us-canada-guns/canada-bans-assault-style-weapons-in-aftermath-of-mass-shooting-idUSKBN22D62V affected 11 categories of assault rifles and other weapons, including the Ruger Mini-14 rifle, used in a 1989 Montreal mass shooting in which 14 women were killed.

Trudeau called the Sept. 20 snap election, two years earlier than scheduled, on the grounds he needed public approval for his plans to deal with the COVID-19 pandemic. But amid unhappiness with the call and voter fatigue, he is slipping.

An Ekos poll on Saturday put the Conservatives on 35% public support with the Liberals on 28.8% and the left-leaning New Democrats on 19.6%, enough to give O’Toole a minority administration and end six years of rule by Trudeau.