© Reuters. Blades for wind-turbines can be seen in the grounds of the Vestas Wind Technology company’s factory, located in the northern Chinese city of Tianjin September 14, 2010. REUTERS/David Gray/Files

COPENHAGEN (Reuters) – The world’s largest wind turbine maker Vestas slashed its operating profit margin outlook for the year due to the war in Ukraine, it said late on Sunday, when it also reported a deeper-than-expected operating loss for the first quarter. 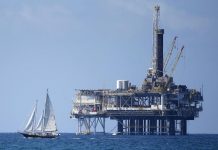