This article was first published at TopDown Charts

Global equities were rocked last week by intense selling. There was hardly any place to hide. The lost more than 3% while global stocks ex-US were down a bit less than 2%. Bonds finally caught a few bidders with the US aggregate finishing roughly even during the last week of April.

Tech Stocks At the Epicenter

It was a brutal month for high-duration assets. The US yield rose from 2.33% to 2.89%. The NASDAQ 100 ETF (NASDAQ:) plummeted 13.6% to its worst month since late 2008 while the broader US market dropped 9.1%. China, as measured by the iShares China Large-Cap ETF (NYSE:), fell only 3.2% in April, besting both the US aggregate bond market and the global stock market.

Where do we go from here? We still see major headwinds.

While our Weekly Macro Themes report bumps up expected returns looking out five to 10 years, the next six to 18 months looks to be a rough stretch. Seasonality is also on the side of the bears through September given that it is a midterm election year in the States (the typical S&P 500 drawdown is 17% during such years). We reiterate a bearish view for the balance of the year on global equities, stocks vs bonds, and on the overall economy.

52-Week Highs Nowhere to be Found

This week’s report underscores risks associated with key issues. An important fallout from April’s dismal global market performance is a worsening technical picture. Recall that stocks bounced strongly off the January and February lows—the S&P 500 actually retraced more than 70% of its early January to February nadir. It wasn’t enough.

Markets failed to make new highs, then took out support. Our featured chart shows just how broad-based the bearish move has been. 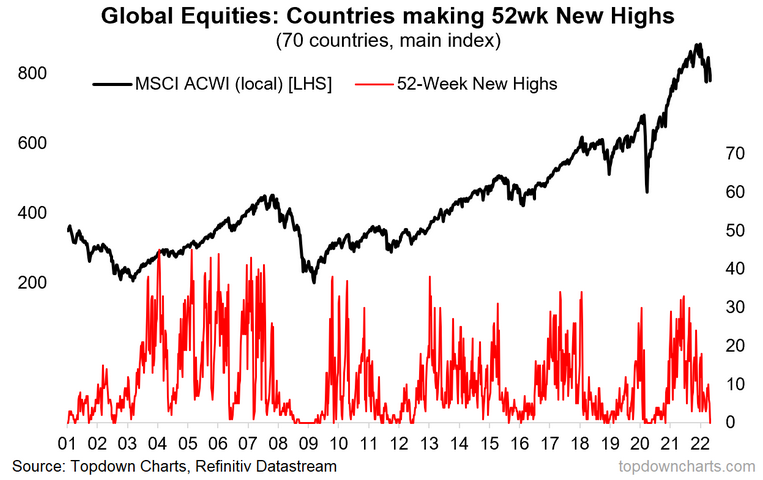 Moreover, we find that other breadth indicators point to further downside—the proportion of countries rising on a year-on-year basis is on the cusp of triggering a bear market signal. Even the S&P 500, a major 2021 outperformer, is down from a year ago. Including dividends, is up just 1 basis point.

Lower Prices, But No Capitulation Yet

The clear collapse in bullish momentum warrants a re-rating downward in expectations for the balance of the year. We need to see more countries hit technical bear market territory for a decent washout to be declared. Often, bear markets end with a crescendo of selling, not a calm dip. Our weekly report also analyzes global equity market internals to get a gauge of risk appetite under the surface. A final piece of the bearish pie rests with could lead to earnings headwinds for multinational firms.

Bottom Line: We remain cautious on global equities. 2022 was shaping up to be a tough year for the bulls in our view, and the S&P 500’s worst start to a year since 1950 (price return) certainly verifies that. Bearish technicals, weakening earnings revisions, and downside risks to economic growth lead us to reiterate a bearish view on stocks.

Workers at Stellantis’ Indiana plant go on strike By Reuters