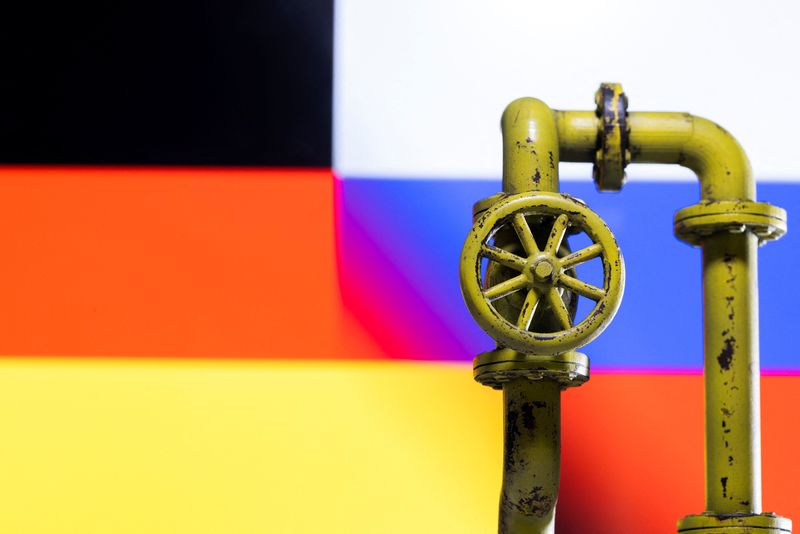 © Reuters. A model of the natural gas pipeline is seen in front of displayed German and Russian flag colours in this illustration taken April 26, 2022. REUTERS/Dado Ruvic/Illustration

By John O’Donnell and Christoph Steitz

FRANKFURT (Reuters) – German big business is drafting a plan to use an auction system to help ration available supplies in the event Russia cuts off its gas, although some fear it could punish smaller firms.

That heightened concerns the same will happen to Germany, which is heavily dependent on Russian gas and is approaching a deadline this month to pay for the fuel under a rouble scheme demanded by Moscow.

An action plan prepared by Germany’s Bundesnetzagentur (BNetzA), which would be in charge of rationing in a gas supply emergency, explores which companies should get priority.

“Depending on the seriousness of the shortages … it could be necessary … to cut supply of gas to some users to zero,” it said this week.

Regulators, it said, could delay gas cuts for industry if the agency determined that a company played a “exceptional role”, although that has yet to be clearly defined.

BNetzA president Klaus Mueller has said several criteria would be taken into account when determining gas rationing for industry, including the size of the company, the relevance of the sector and potential economic losses.

German industry is particularly anxious about energy-intensive factories, such as glass, steel, food or drug manufacturing, as well as the chemicals sector, that provide many of the building blocks for industry.

Some in industry say the regulator will struggle to establish a coherent rationing list because manufacturing supply chains are intertwined and knock-on effects difficult to predict.

To try to gain control of the situation, proposals by the Federation of German Industries (BDI), which will be outlined to Germany’s network regulator in early June, back the idea of an auction-style system.

The state would reimburse companies if they cut gas consumption by stopping production temporarily or longer term, leaving more for critically relevant sectors, said an industry source close to the matter, who asked not to be named.

Another source said this model would seek to distribute gas on the basis of price. Details were still being worked out.

Germany’s small and medium-sized firms, under the umbrella of the ‘mittelstand’ BVMW lobby group, however, are alarmed at the idea of using the scheme to cope with gas rationing.

“To auction gas rights is not fair,” Hans-Juergen Voelz, the group’s chief economist, saying such a scheme could shut medium-sized companies.

“Big, financially strong companies have a much higher pain threshold in such auctions than a mittelstand company.”

Already Germany has such a system to try to wean the country off coal.

Utilities place bids for compensation payments they will get in exchange for idling coal-fired power stations.

Companies willing to accept the lowest price in return for shutting down qualify for the state handout, leaving larger power stations, with more at stake, up and running.