Lowe’s Downtrend Is Not Over

Lowe’s (NYSE:) moved lower on the heels of its Q1 report and we don’t think the move is over. While price action is rebounding the day after the report was released we are viewing it as a dead cat bounce, at least for now. The freshly set low may be the bottom in prices but the stock is not at that level now, the indicators do not inspire optimism, and the company’s growth is more than priced in. The key takeaway from the report is that growth has slowed to near nil and the outlook isn’t much better. The guidance is calling for growth but it is expecting conditions to improve as soon as the current quarter and for revenue and earnings to grow relative to last year’s record pace. We don’t think that’s going to happen.

Shares of Lowe’s Companies have been in a downtrend since late 2021 and that trend was confirmed after the release of the earnings report. Price action fell to a new low, confirming resistance at the short-term moving average, and the indicators are very weak so there is no reason to expect a surge in buying. As for the results, the $23.66 billion in revenue is down -3.1% versus last year and missed the Marketbeat.com consensus estimate although by a slim 25 basis point margin. The weakness is due to a -4.0% comp, -3.8% in the US, which was more than enough to offset strength in the Pro segment. Sales through the Pro channels are up 20%.

Turning to the margin, there is some good news in that gross and operating margins improved on a YOY basis. The operating margin increased by 65 basis points on pricing action, mix, and internal efficiency to leave the GAAP EPS above expectations. The $3.51 in earnings is up $0.30 from last year and beat the consensus by $0.28 to outpace revenue by a very wide margin. The gains in EPS are also due to share repurchases that are expected to continue in the current year. The company said it bought back $4.1 billion worth of shares in Q1 or about 3.2% of the current market cap.

The guidance is as tepid as the results in that it is only in line with the consensus estimates. We view the guidance cautiously as well because of the expectation for not only an improvement in quarterly results but for a sustained improvement above last year’s very difficult comps. In addition, inflation is still a concern and may put increasing pressure on the margin. As it is, the company is expecting $97 to $99 billion in revenue and adjusted EPS of $13.10 to $13.60 compared to the $98 billion and $13.40 consensus estimate. The bottom line, Lowe’s 2022 results are priced into the stock and there is risk in the outlook.

The Analysts Reel In Their Estimates

The 22 analysts rating Lowe’s Companies have it pegged at a firm Buy but the sentiment is slipping. The consensus rating hasn’t moved much over the last year but the price target peaked out ahead of the Q4 earnings report and has been trending lower since. We’ve seen 6 commentaries since the Q1 report was released and they are all negative. While 1 of the 6 raised their price target (versus the other 5 who lowered theirs) the new target is well below the Marketbeat.com consensus figure as is the consensus of the 6 new targets. The takeaway here is that analysts’ sentiment is in decline and will keep downward pressure on the stock despite the fact the consensus target is still 30% above the price action.

The Technical Outlook: Support Turns To Resistance For Lowe’s Companies

Lowe’s had been sitting on a support level until the Q1 earnings report was released. Now the price action is below that level and it is acting as resistance. If the price action can not get back above $190 the odds of a new low being set will become very high. In that scenario, a move to a new low would give further confirmation of the downtrend and open up targets in the range of $150 to $160. If, however, price action is able to regain the upper side of $190, we see this stock moving sideways until other news comes out or there is a worsening of economic conditions. 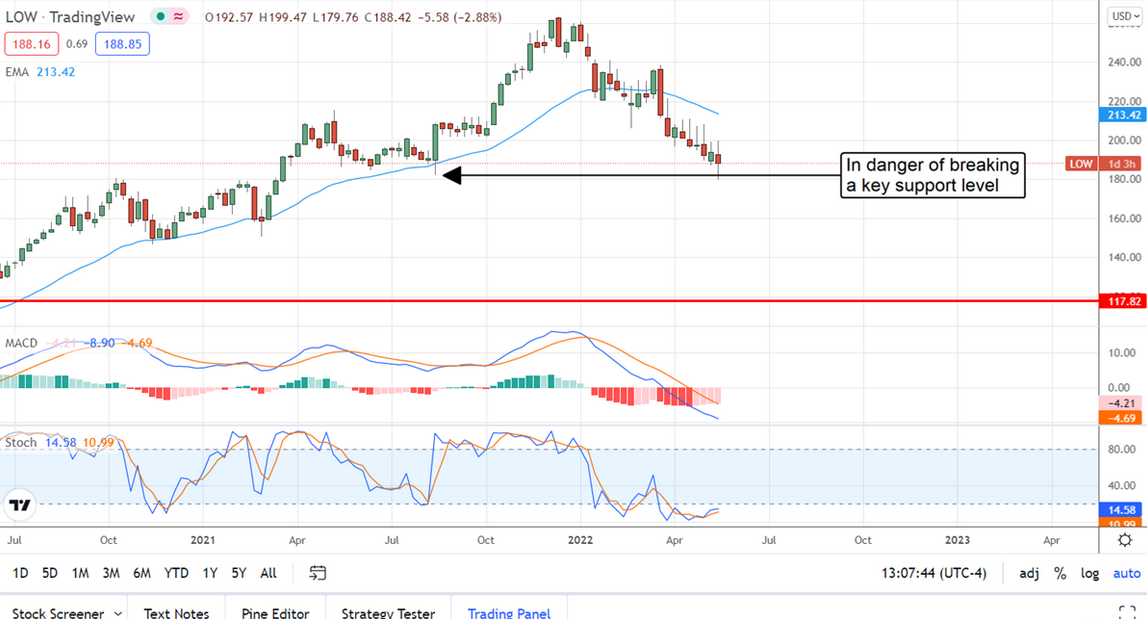 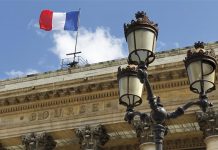 Should You Have These Two Banks In Your Portfolio?