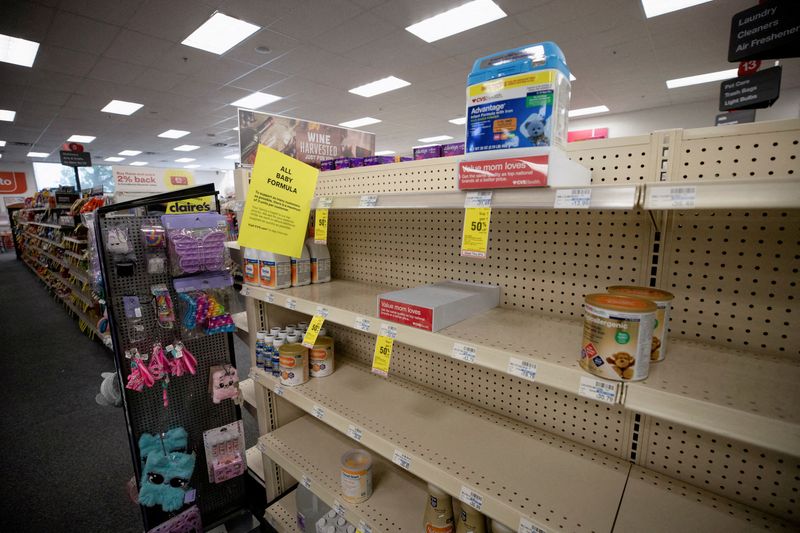 (Reuters) – The first shipments of infant formula from Europe to address a critical shortage in the United States should begin arriving this weekend, President Joe Biden said on Friday amid criticism of his administration’s handling of the issue.

Biden said on Twitter (NYSE:) the initial military cargo plane flights under “Operation Fly Formula” meant that “up to 1.5 million bottles of safe Nestlé infant formula will be coming to U.S. shelves as soon as possible.”

A Feb. 17 recall by top baby formula maker Abbott Laboratories (NYSE:) during an investigation by the Food and Drug Administration has created one of the most urgent food shortages in recent history for U.S. families.

Biden this week said he was invoking the Defense Production Act to increase supplies.

“The Secretary of Defense ordered today the first flights supporting Operation Fly Formula. Due to the urgency of the situation, these flights will comprise U.S. military aircraft and will depart Ramstein Air Base in Germany this weekend,” White House Communications Director Kate Berner said on Twitter.

“The flights will transport 132 pallets of Nestlé Health Science Alfamino Infant and Alfamino Junior formula to Indianapolis, IN. These formulas have been prioritized because they serve a critical medical purpose and are in short supply in the US because of the plant closure,” Berner wrote.

Aptamil maker Danone SA (OTC:) has stepped up shipments of infant formula from Europe to address a shortage in the United States, according to U.S customs data and an analysis of ocean cargo data by shipping consultancy Ocean Audit for Reuters.

Criminal complaint filed against UBS over DRC-linked funds By Reuters