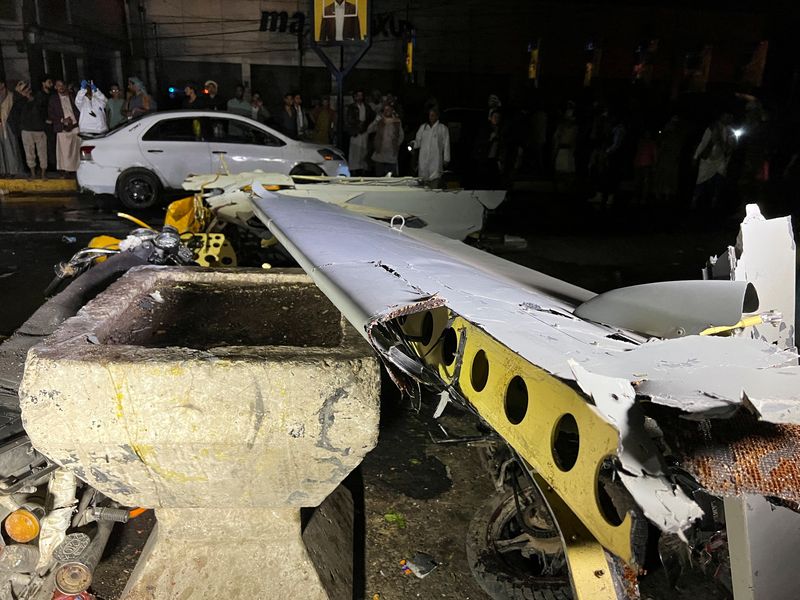 © Reuters. FILE PHOTO: The wreckage of a drone aircraft is seen on a street in Sanaa, Yemen May 23, 2022. REUTERS/Adel al-Khadher

By John Irish and Caroline Pailliez

PARIS (Reuters) – Three non-governmenatal organisations (NGOs) said on Thursday they had filed a lawsuit at a Paris court against three top French arms’ producers for alleged war crimes complicity in Yemen after selling weapons to Saudi Arabia and the UAE.

The compliant, filed by the European Centre for Constitutional and Human Rights (ECCHR), the Mwatana for Human Rights and Sherpa International, comes amid a nationwide truce between a Saudi-led coalition and the Iran-aligned Houthi group, the first since 2016, went into effect on April 2.

Rights groups in France have repeatedly attempted to show that Paris’ tacit support for the coalition has prolonged and worsened the conflict, which began in 2015 after the Saudi-led coalition intervened against the Houthis after they ousted the government from the capital Sanaa.

By targeting Dassault Aviation, Thales and MBDA France, the NGOs hope it will keep the subject in the public domain at a time when the United States and its Western allies are seeking to improve ties with Saudi Arabia.

“The coalition’s airstrikes have caused terrible destruction in Yemen. Weapons produced and exported by European countries, and in particular France, have enabled these crimes,” said Abdulrasheed al-Faqih, Executive Director of Yemeni organisation Mwatana for Human Rights.

“Seven years into this war, the countless Yemeni victims deserve credible investigations into all perpetrators of crimes, including those potentially complicit,” he said.

The current truce has offered a glimmer of hope in a country where the war and ensuing economic collapse have left millions facing starvation, and could also provide Riyadh with an exit from a costly conflict that is a point of tension with Washington.

Anya Taylor-Joy had a ‘life-changing’ experience on ‘Furiosa’