Investors are rapidly rebalancing their portfolios as the risk of the US economy slipping into a recession grows. In general, they’re moving away from high-growth equities, buying value stocks which have a better chance of weathering a prolonged downturn instead.

One such casualty is semiconductor manufacturer Advanced Micro Devices (NASDAQ:). 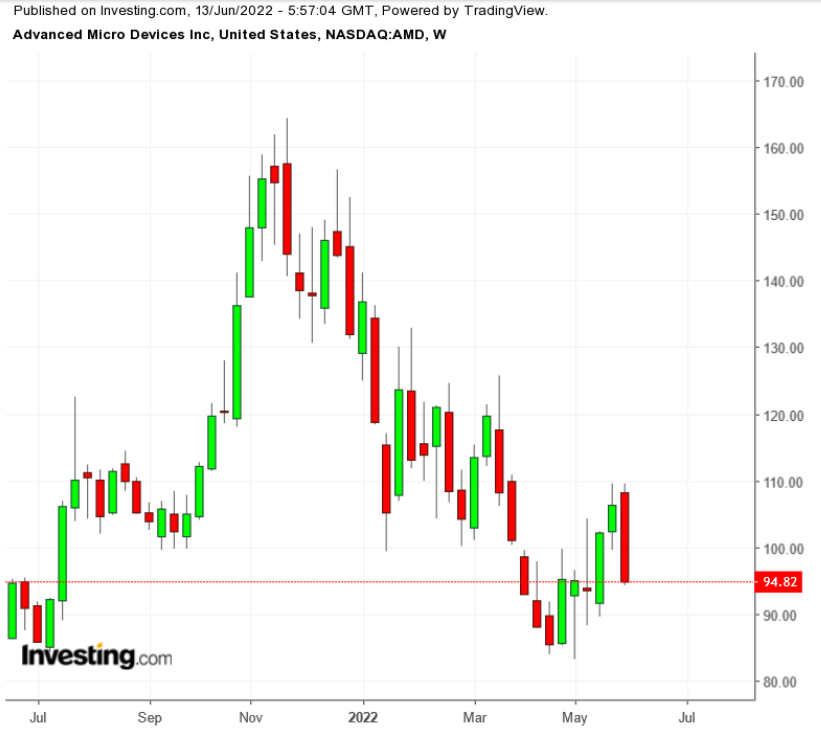 During the pandemic tech stock boom, AMD was one of the most loved chip stocks. But in 2022, shares have lost more than a third of their value after their 50% surge in 2021. The stock closed on Friday at $94.82.

However, the steep decline is making both investors and analysts wonder: has this pullback gone too far?

Given the current uncertain macro environment, it’s difficult to predict where AMD stock will be trading in the short run. Overall, the biggest threat to chipmakers comes from the increasing possibility of demand destruction if the economy slips into a recession later this year.

The chances of such an outcome increased last week after the latest US shows that price pressures are now well-entrenched in the economy. Shares of chipmakers have been pummeled this year amid soaring interest rates and concerns about slowing economic growth that could threaten to leave semiconductor companies saddled with excess inventories.

So far, AMD management doesn’t see this adverse macro environment slowing demand for its chips. The company, early last month, gave a forecast for the current quarter, indicating that the chipmaker continues to make strides in its most lucrative market: data-center processors.

AMD predicted second-quarter sales of roughly $6.5 billion, compared with an average analyst estimate of $6.03 billion. But in the semiconductor industry, it doesn’t take much to reverse the cycle.

Competitor NVIDIA (NASDAQ:), which released its three weeks later than AMD, gave a disappointing quarterly revenue forecast, blaming Chinese supply chain problems and the war in Ukraine. As the biggest US chipmaker by market cap and a key provider of semiconductors used in data centers, the Santa Clara, California-based NVIDIA is seen as a bellwether for the industry.

Despite concerns about demand—which could drastically slow in the event of a recession—many analysts remain bullish on AMD stock, given its long-term prospects. During the company’s Investor Day last week, AMD Chief Executive Officer Lisa Su put forward a robust growth scenario in which she expects a 20% compound annual growth rate for the company, helped by the AMD’s latest merger deal with the semiconductor company Xilinx.

AMD expects a gross margin of more than 57%, driven by a mix of new offerings. At the same time, operating expenses are anticipated to be around 23-24%. The chipmaker expects its operating margin to hover around the mid-30% range as the tech giant improves margins and profitability.

“We come away from the event with higher conviction in AMD’s market share prospects as well as its ability to drive revenue synergies associated with the Xilinx and Pensando acquisitions.”

“AMD is not immune to macro volatility; however, we believe there are enough positive offsets for the company to sustain its fundamental outperformance.”

Raymond James’ analyst Chris Caso, in his note, said AMD is in a strong position to grab more market share from Intel (NASDAQ:) in the days to come.

“Our overriding thesis on AMD however is that INTC’s 80%+ market share is simply unsustainable even if INTC does manage to catch up, since we see no possible scenario in which INTC has a meaningful performance advantage through 2025, and it’s quite possible that INTC misexecutes on their aggressive roadmap. With AMD stock now trading at ~16x that $6 2024 earnings power, we think that’s a highly attractive multiple for a company with prospects of 20% top line growth.”

Piper Sandler upgraded AMD’s rating to overweight in a recent note, while boosting its price target to $140 from $98. Its note said:

“There are two old sayings in the investment world: 1) ‘You cannot time the market, so do not try’ and 2) ‘Buy good companies when they are down.”

Except for macro risks, it seems everything else is going right for AMD. In our view, its current weakness opens a door for long-term investors to build their positions.

That said, the stock is unlikely to offer the kind of hefty returns that investors saw last year when the global economy was on a different trajectory.

Interested in finding your next great idea? InvestingPro+ gives you the chance to screen through 135K+ stocks to find the fastest growing or most undervalued stocks in the world, with professional data, tools, and insights. Learn More »