This article was written exclusively for Investing.com

As a rule, it’s dangerous in any market—and particularly a bear market—to believe a stock is ‘cheap’ simply because it has returned to a past, lower price. But Zillow (NASDAQ:) might be a bit of an exception to that rule. 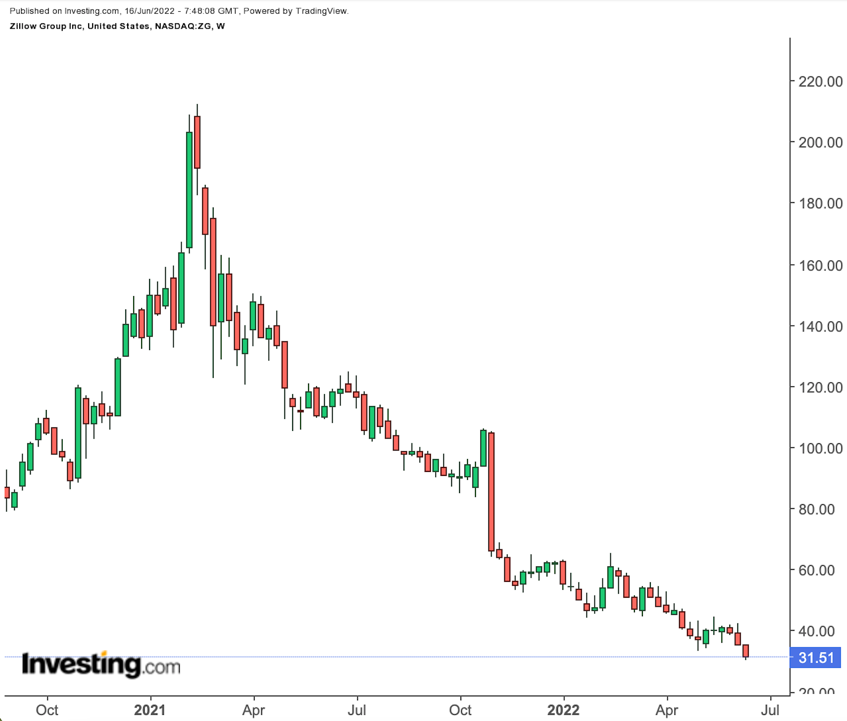 To be sure, the digital real estate company’s stock isn’t cheap solely because it’s declined 31% since the beginning of 2020. Using past prices is a common investing error known as ”. When the market changes for the worse and a business changes for the worse, the underlying stock not only will decline, but it should decline.

But the steep decline in Z stock not just from last year’s brief highs above $200, but from pre-pandemic levels, provides an interesting framework for a potential bull case. Investors right now are extraordinarily concerned about the US housing market—and rightly so. Taking the long view, however, Zillow still has a rather large opportunity.

Investors were willing to pay up for that opportunity before the equity and housing markets went crazy, starting in the second half of 2020, and in time, they might be willing to do so again.

It’s exceptionally difficult to value Zillow on a fundamental, forward-looking basis. The housing market of the last two years—and indeed the last twelve—has been skewed by historically low mortgage rates, a strong economy (admittedly with a few hiccups along the way), the coronavirus pandemic, and the rapid rise of remote work. It’s difficult to forecast exactly what the next two (or twelve) years look like, but it seems certain that the operating environment will be both different and more difficult.

A significant strategic blunder skews backward-looking fundamentals as well. In 2018, Zillow launched a so-called iBuying business, in which it used an algorithm essentially to ‘flip’ houses. The effort was a . Last year, the company announced it would exit the business and take a $560 million writedown.

The good news is that the iBuying misadventure is over. Judging by the market’s treatment of the digital home buying and selling platform Opendoor Technologies (NASDAQ:), whose stock has dropped almost 80% since the beginning of November, that may not be a bad thing.

And with the remaining inventory being sold this quarter (and the remaining debt being repaid), over time investor focus should return to the core real estate listing business. That, too, may not be a bad thing.

The core Zillow business remains rather solidly . Over the past four quarters, what Zillow calls its IMT (Internet, Media & Technology) segment has generated $853 million in Adjusted EBITDA (earnings before interest, taxes, depreciation, and amortization).

Obviously, the hot housing market of the past 24 months has been a huge factor. Go back to 2019, and IMT generated Adjusted EBITDA of just over $300 million.

At the moment, Zillow’s enterprise value (pro forma for the house sales and debt repayment this quarter) is about $7 billion. Looking to the past four quarters, then, Z stock looks cheap, at a little over 8x EBITDA. That’s an absurdly low multiple for a high-margin Internet business.

But assume that the last four quarters are something close to peak profits and use 2019 as a baseline gives an EV/EBITDA of about 23x. That’s not a bad multiple for this business, but it’s a multiple that does suggest growth going forward over the long haul.

Yet, Zillow probably should be able to drive growth above 2019 levels going forward. The housing market that year was solid but hardly spectacular: US existing-home sales of 5.34 million were right in line with the results of the previous four years.

And, again, investors at the end of that year were willing to pay a far higher multiple—about 28x EBITDA. The potential for success in the iBuying effort may have been a factor—but it certainly wasn’t the biggest factor.

Again, the fact that Zillow stock traded at $45 at the end of 2019 doesn’t mean that is what it is worth now, or that the stock absolutely will return to that level at some point. But it does give us a data point as to how investors valued this business when the real estate market wasn’t crashing.

That data point in turn suggests that Zillow might be able to get a similar multiple, and a similar valuation when investors quit worrying that this housing market too will crash.

Riding Out The Storm

Admittedly, there’s one core problem with this thesis: the housing market likely is in for a reasonable period of contraction. Mortgage rates have reached their highest levels since . The big spike in remote work which drove US families to move in high numbers has faded. Add in fears of a recession and Zillow may be in the proverbial ‘penalty box’ for quite a while.

Still, longer-term there may be an opportunity here. The country still has a housing shortage; cyclical effects aside, the US real estate market should keep growing over time.

Zillow can capitalize on that growth. Its brand is clearly valuable. The company notes in its annual report that more Americans search for ‘Zillow’ online than search for ‘real estate.’ The move into mortgages offers potential over time, yet that business is not contributing any profit yet. Zillow is building out its rentals business as well, a business that could mitigate the highly cyclical nature of home sales.

This will all take some time. The stock needs time for investors to put the iBuying debacle in the rearview mirror and focus on the profitable IMT business. The housing market needs time to adjust to a completely different mortgage rate environment. The company needs time to build out its newer offerings.

And so investors can be patient here. Dollar-cost averaging, selling out-of-the-money puts, or simply watching and waiting all seem like reasonable strategies until there’s more certainty here.

Again, investors were willing to pay up for Zillow in a reasonably normal environment. I do expect they’ll do it again—whenever that environment finally, mercifully, returns.

Russia shrugs off jobs impact after reports of Dell exiting the...

Should These Two Airlines Be In Your Portfolio?