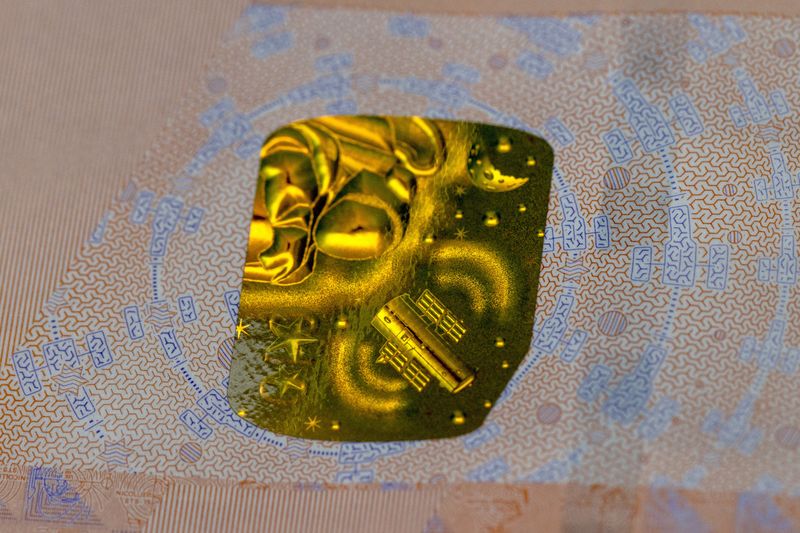 © Reuters. A detail using SPARK technology is pictured on a sheet of the Laika specimen series of banknotes produced by Koenig & Bauer Banknote Solutions, as a display of their possibilities using cutting edge technology such as SPARK, Susi Optics, Intalglio or Offs

LAUSANNE (Reuters) – There’s still a lot of life left in the traditional bank note, printing company Koenig & Bauer Banknote Solutions said, with coronavirus and the war in Ukraine driving up demand for paper money despite competition from other forms of payment.

Nearly 90% of the worlds’ banknotes are estimated to be printed at least in some part by the company’s machines, with production levels of paper money increasing despite the rise of online payments, digital currencies and contactless ways to pay.

“Banknotes were there from the beginning and are still there,” chief executive Eric Boissonnas said, as the company marked its 70th anniversary of operating in Switzerland.

Its machines are used by virtually every country in the world, helping to produce U.S. dollars, Swiss francs, euros and other currencies which have the latest security features to protect against forgery.

“During COVID production of notes had to go up because demand was much higher,” Boissonnas said.

“If we look in the region around Ukraine, demand for banknotes has been multiplied,” he told Reuters. “As soon as you have a crisis, people take cash to be sure they can pay in every situation.”

The business, now part of the Germany’s Koenig & Bauer Group, established itself in Lausanne in 1952, where it now employs 140 people.

History Says Bear Market Ends in October with S&P 500 at...