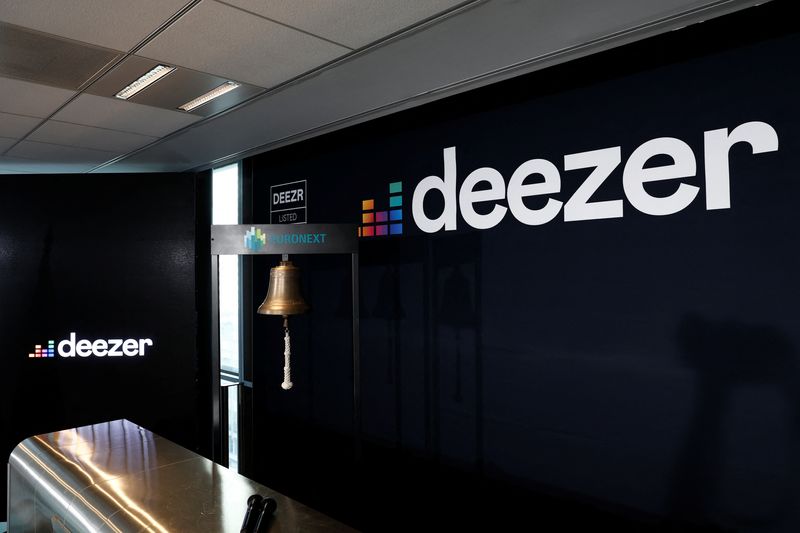 © Reuters. The logo of French music streaming platform Deezer is seen before the opening bell ceremony for the company’s initial public offering (IPO) at the Euronext stock exchange at La Defense business and financial district in Courbevoie near Paris, France, July

PARIS (Reuters) -Seven years after an aborted flotation, French music streaming platform Deezer failed to attract much investor interest for its Paris market debut and its shares fell 11% in early dealing on Tuesday.

Deezer and its rivals represent a shift in the music industry away from buying and downloading tracks to listening online to songs stored remotely.

“The sector is super competitive: There are multiple services (Amazon (NASDAQ:) Prime, Apple (NASDAQ:) Music etc.) which are run by large U.S-companies with very deep pockets and strong ecosystems that can subsidise their business with other income streams and therefore they do not depend on the success of their music-platforms unlike “pure-play” companies do,” Manuel Mühl, DZ Bank analyst said.

“In this sector we prefer investing into content (the music labels) vs. platforms that have to pay for that content so that they may distribute and monetise it over ads and subs,” he added.

In April, Deezer announced plans for a stock market listing in Paris in a deal valuing the business at just over 1 billion euros ($1 billion), with a Special Purpose Acquisition Company (SPAC), 12PO, set up for the deal.

In 2015, Deezer had to postpone initial IPO plans due to market conditions.

Deezer’s larger rivals include Spotify (NYSE:), which carried out its initial public offering in 2018.