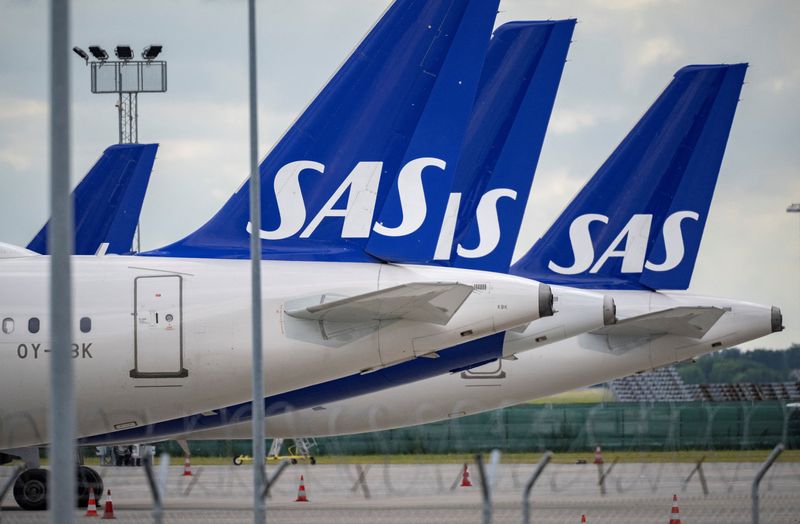 © Reuters. FILE PHOTO: View of SAS Airbus A321 and A320neo aircraft at Kastrup Airport parked on the tarmac, after pilots of Scandinavian Airlines went on strike, in Kastrup, Denmark July 4, 2022. TT News Agency/Johan Nilsson via REUTERS

By Niklas Pollard and Nikolaj Skydsgaard

STOCKHOLM/COPENHAGEN (Reuters) -Hundreds of SAS flights were cancelled on Thursday as the airline wrestled with a strike by pilots at its main SAS Scandinavia arm, overshadowing a traffic surge during June.

Talks between the airline and pilots over a new collective bargaining agreement collapsed on Monday, prompting a strike which adds to travel chaos in Europe and deepens the financial crisis at SAS, which estimated it would ground half its flights.

The troubled airline, whose biggest owners are the Swedish and the Danish states, filed for Chapter 11 bankruptcy protection in the United States on Tuesday. The first hearing was due to begin at 1400 GMT in New York with SAS expecting the process to take between nine and 12 months.

Tuesday’s traffic figures highlighted what SAS was now missing in the peak summer period, with the airline flying 1.9 passengers in June, a 220% increase on the year.

Data from flight tracker FlightAware showed 202 flights, 66% of the airline’s daily total, were cancelled on Thursday.

The Swedish pilots union said that the pilot associations had proposed making an exception for several weeks to SAS in order to repatriate stranded charter passengers.

Charter companies have warned thousands of people could be stranded unless a solution for their return flights, which were due to be operated by SAS, could be reached.

“Some of our destinations are inaccessible and lack other options for travelers to get home,” the union said in a statement, adding that it was extending “a helping hand”.

SAS did not immediately reply to a request for comment.

The airline’s stock has lost more than a quarter of its value since the strike began and has tumbled more than 60% since the start of the year as the Ukraine conflict disrupted Asian routes and the threat of strike action clouded the outlook.

Shares in SAS, which has struggled with a high cost base relative to low-fare rivals, were down 4.1% at 1023 GMT.

SAS has said the strike will cost it $10 million to $13 million per day and accelerated its decision to seek bankruptcy protection, which it said will help it accelerate restructuring plans, including deep cost cuts, announced in February.

The striking pilots have said they would consider pay cuts, but cannot accept SAS hiring new pilots through two new subsidiaries, under what unions say are worse terms.

Talks, which ended on Monday, have yet to restart, although unions said they had offered concessions.

“They should come back, it’s completely crazy,” Keld Baekkelund, chief negotiator for the Dansk Metal union, said, adding: “It almost costs more to strike (for) one day than what divided us.”

IPO for Erayak Power Solution to debut on NASDAQ today