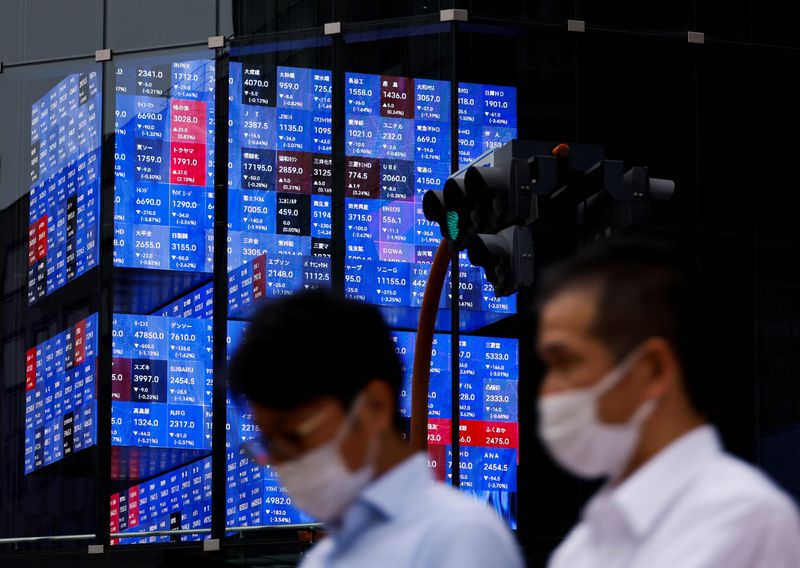 (Reuters) – Asian stocks gained on Wednesday, taking back some of their recent losses, while the euro hovered just above parity against the dollar ahead of a highly anticipated U.S. inflation report later in the global day.

MSCI’s broadest index of Asia-Pacific shares outside Japan gained 0.65%, snapping two straight days of losses, after having slumped to its lowest in two years the day before.

Taiwanese stocks led the gains, with Taiwan Semiconductor Manufacturing Corp a regional and local index heavyweight rallying 4%, after Taiwan’s finance ministry said on Tuesday it would activate its stock stabilisation fund. The market fell to a 19-month low that day.

But most moves felt insubstantial ahead of the release of U.S. inflation data for June, which economists polled by Reuters expect to have accelerated by 8.8% on an annual basis, a 40-year peak.

A high inflation print would likely be read by the U.S. Federal Reserve as a sign they need to continue with aggressive interest rate rises to get on top of surging prices, even if this might push the economy into recession.

The Fed increased rates by a supersized 75 basis points in its last meeting.

“Sharp (OTC:) weakness in oil prices in July suggests that June’s (inflation) may mark a peak, however. If so, the most dynamic phase of Fed tightening could conclude with a 75bps rate rise on 27 July,” said analysts at ANZ.

“However, our expectation is that underlying strength in core inflation and still deeply negative real policy rates means 50bps rate rises will still be appropriate after the summer.”

Worries of higher rates contributing to slowing global economic growth has been a major factor in stock market declines this year, while in currency markets, the main effect has been to boost the safe-haven dollar.

The euro was at $1.00265 on Wednesday morning, as investors remained focused on whether it would fall below 1 U.S. dollar for the first time since 2002.

The dollar was also firm on other peers, and its index measure against major rivals was holding solidly at 108.27.

Oil prices paused their overnight declines. was little changed at $99.55 a barrel with U.S. West Texas Intermediate crude at $95.78.

French lawmakers back special tax on dividends from windfall profits By...