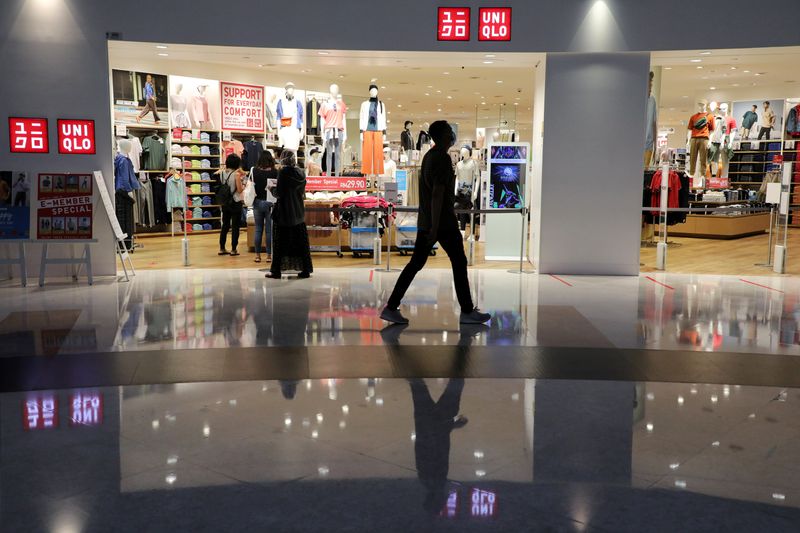 TOKYO (Reuters) – Japan’s Fast Retailing, home of Uniqlo, is expected to report quarterly profit grew 11% overall on Thursday, but investors’ focus will be on whether China is recovering and how domestic consumers are faring with inflation and the weak yen.

A bellwether for global retailers operating in China, Fast Retailing previously warned of a sharp decline in profit this year from its nearly 900 stores in the world’s no.2 economy. Still, it raised overall sales and profit forecasts to reflect strong demand in North America and Europe.

On Thursday, the company is expected to post an operating profit of 66.72 billion yen ($487 million) for its fiscal third quarter through May, according to an average of seven analysts’ forecasts from Refinitiv.

For the year ending August, the company expects earnings to climb 8.4% to 270 billion yen.

Uniqlo, known for affordable basics like socks and t-shirts, is popular in China and has not disavowed the use of Xinjiang cotton, unlike rivals including H&M, after allegations of forced labour in the region emerged in recent years.

“We believe the worst is behind us in China and this current quarter is ‘as bad as it gets’,” wrote Mark Chadwick, an analyst who publishes on the Smartkarma research platform.

Meanwhile, the U.S. market is projected to turn a profit for the first time, he added.

Ryohin Keikaku reduced full-year forecasts, citing an uncertain outlook for mainland China. But Seven & i, which also runs Speedway convenience stores in the United States, lifted annual earnings estimates as the yen’s decline to a 24-year low against the dollar boosts the value in Japanese currency terms of sales booked in the world’s biggest economy.

In Japan, meanwhile, the yen’s drop is adding to production costs and inflation. Fast Retailing chief executive Tadashi Yanai has railed that there is “absolutely no merit” to a weak yen.

The company said last month it would increase prices on its popular fleeces this autumn and warned that more hikes could be on the horizon.

Bill Gates upbeat on climate innovation, even if 1.5C goal out...