Starting next week, you won’t need to spend more than $2,000 to buy a share of Alphabet (NASDAQ:). The parent of the Google search engine will complete a 20-for-1 stock split by the close next Friday in the form of a one-time special stock dividend, aiming to draw a wider audience for its shares.

Alphabet, like other mega-cap tech companies that saw their share prices soaring during the past decade, has been at a disadvantage, as its stock became expensive for retail investors. For mom-and-pop traders, a lower stock price makes it easier to buy shares rather than purchase fractional stocks through their brokerage firms. 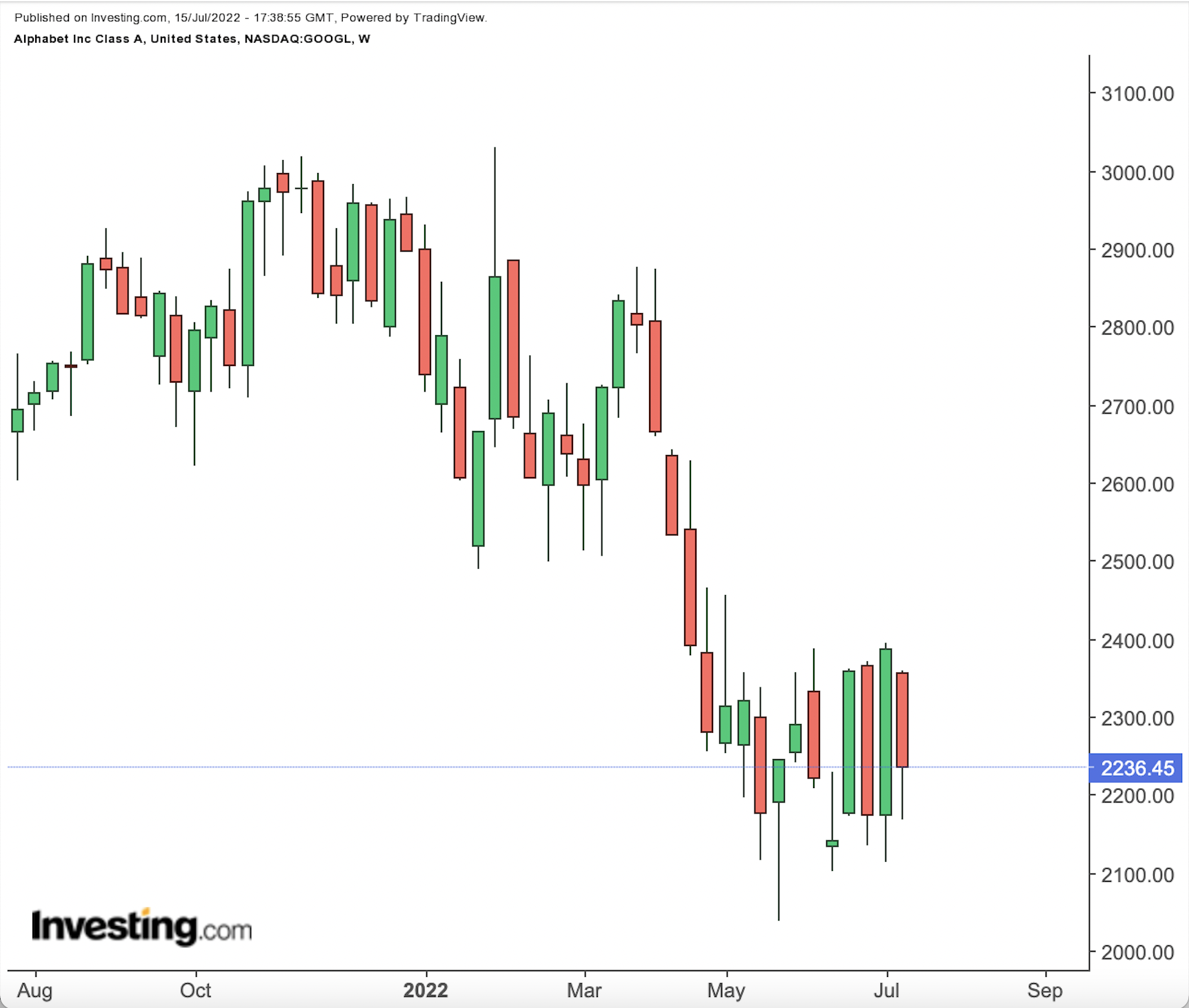 Alphabet is one of the last large mega-cap companies to do its stock splits in the current wave. Apple (NASDAQ:), Tesla (NASDAQ:) and Amazon (NASDAQ:) all have already completed their splits during the past two years.

Technically speaking, stock splits don’t change the value of a company or its investors’ holdings. However, the split decision illustrates the growing influence of retail investors on the market in modern times and the companies’ desire to make their investment appeal wider.

That said, investors shouldn’t make their investment decisions based on stock splits. Instead, the company’s business fundamentals and its valuation matter the most. On that account, Google stock is an attractive long-term buy.

Its stock, which has dropped more than 20% this year amid a widespread sell-off in tech shares, is in a much better position to withstand a looming recession that could force companies to reduce their digital ad spending, depressing Alphabet’s revenues.

According to Google’s Chief Financial Officer Ruth Porat, the second-quarter results will be impacted by the Russian war in Ukraine, a worsening macro environment, tougher comparisons against pandemic highs and changing foreign exchange rates.

Ahead of the earnings announcement later this month, some equity analysts have lowered estimates for YouTube sales in part to reflect the heightened competition from ByteDance Ltd.’s TikTok video app. Google is also facing a tougher regulatory environment in Europe. Google’s second-largest business line, its network system that runs ads elsewhere on the web, was likely limited by new regulations in Europe that restricted ad targeting.

Still, the company’s diverse portfolio and its dominant position in the digital ad market make it hard to ignore.

Google’s search advertising business, the company’s main revenue driver, gained 24% in Q1, while its Cloud unit sales increased 44%, showing that the company’s efforts to catch up to market leaders  – Amazon.com and Microsoft Corp (NASDAQ:) –  are paying off.

This strength in Google’s business model is the main reason that analysts on Wall Street overwhelmingly support buying the stock at these levels. In an Investing.com survey of 52 analysts, 50 have an “outperform” rating on the stock, with a 12-month consensus price target that implies about 38% upside. 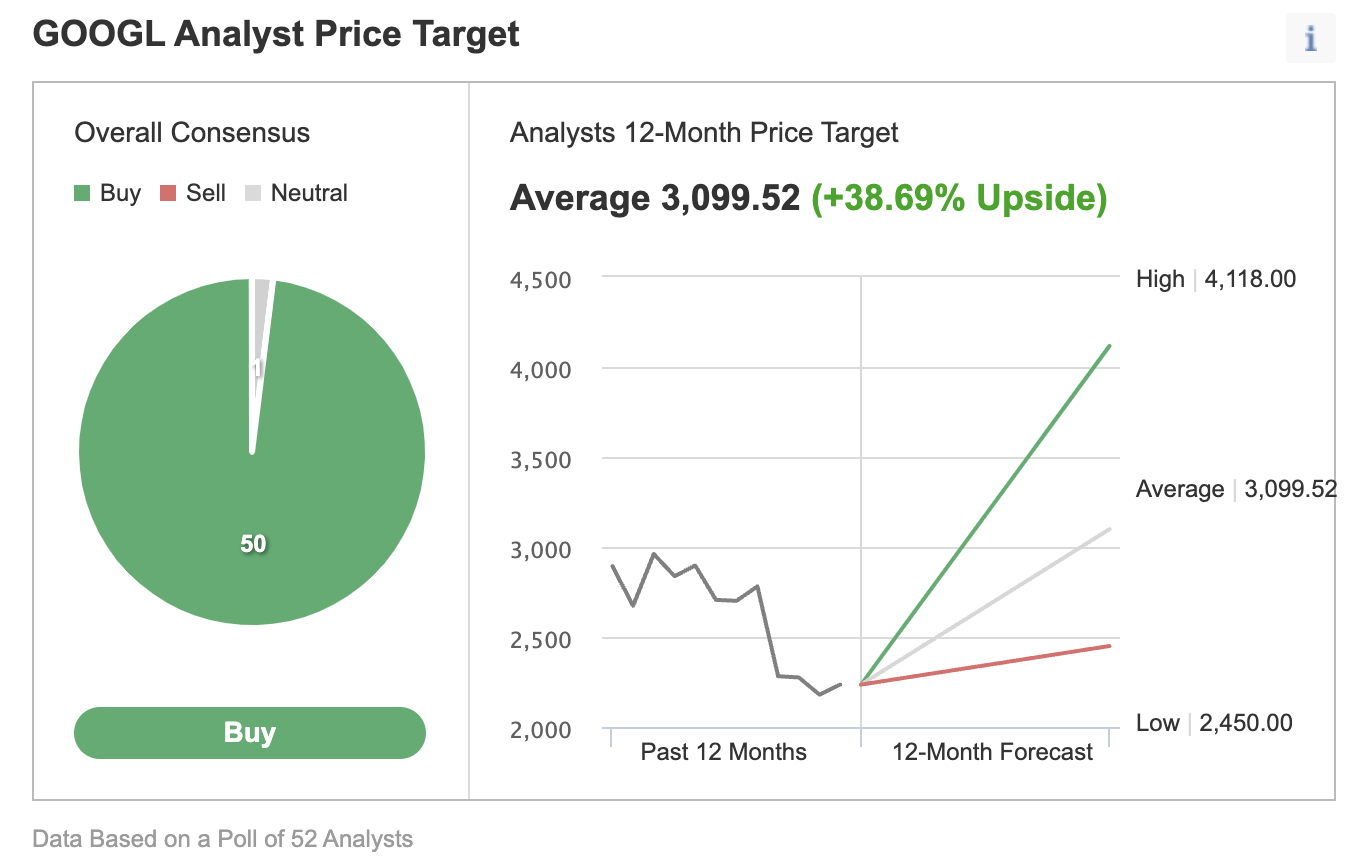 In a recent note, Bank of America said:

Alphabet’s stock split decision will broaden the company’s appeal among retail investors and make a headway in the stock’s potential entry into the prestigious . In addition, Alphabet has a significant upside due to growth momentum in its cloud and other units. 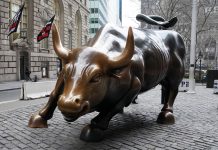 AutoNation Stock Is Firing On All Pistons

The Time to Buy Palantir Is Nearing