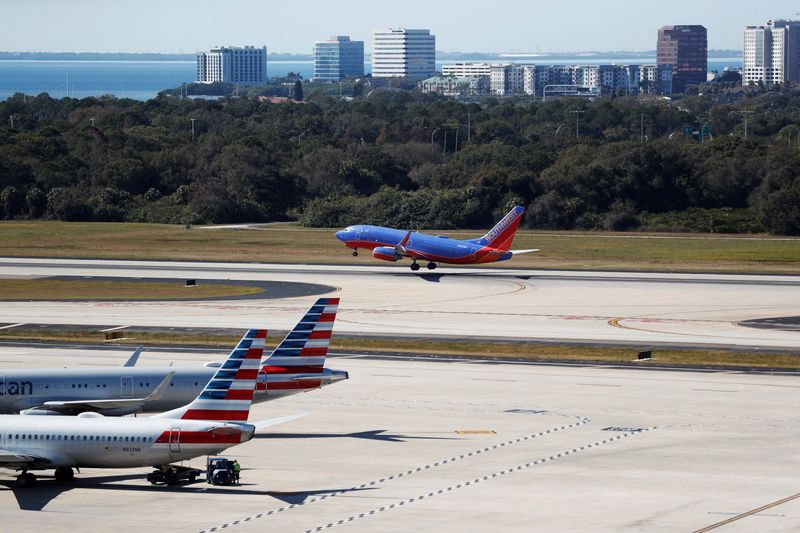 © Reuters. FILE PHOTO: A Southwest airplane takes off at the Tampa International Airport as airports around the country are awaiting for Verizon and AT&T to rollout their 5G technology, in Tampa, Florida, U.S., January 19, 2022. REUTERS/Octavio Jones

FARNBOROUGH, England (Reuters) – The acting head of the Federal Aviation Administration (FAA) said on Wednesday that U.S. airlines’ travel performance was improving after delays and cancellations snarled traffic and prompted anger from lawmakers and passengers.

“We are keeping our eye on things. We’ve seen good improvements,” Acting FAA Administrator Billy Nolen told Reuters and another news outlet on the sidelines of the Farnborough Airshow. “We can see overall delays are down… The airlines are working to right size their network.”

Airlines have pointed the finger at the FAA for air traffic control staffing issues causing delays and cancellations, but Nolen, who has been running the FAA since April, said the “majority” of the problems “are not in any way shape or form related to air traffic (staffing) shortages.”

Nolen said he has spoken to all of the airline chief executives about air traffic issues.

Nolen said the FAA was working to hire air traffic controllers. “We are on track to hire 1,000 controllers this year,” Nolen said. For 1,500 positions, the FAA accepted 57,956 applications for review. The FAA has said it plans to boost air traffic control staffing in some places that have had issues like Jacksonville, Florida.

Nolen declined to comment on whether there was enough time left this year to complete certification of the 737 MAX 10. “I will just direct you to back to Boeing (NYSE:) in terms of what they think their ability to deliver, according to what time,” Nolen said.

Boeing faces a December deadline to win approval for the 737 MAX 10 – the largest member of its best-selling single-aisle airplane family. Otherwise, it must meet new cockpit alerting requirements under a 2020 law, unless Congress waives it.

On Sunday, Boeing Commercial Airplanes Chief Executive Stan Deal said certification “still connects to the end of the year” but acknowledged it might not happen. “The next step of the process is to have the FAA on the airplane,” Deal said.

Nolen said the FAA was hiring key positions. “I don’t buy into the notion that there is some sort of brain drain going on at the FAA,” Nolen said.

He said the FAA had “created an absolute level of certainty and clarity” for future electric vertical takeoff and landing aircraft (eVTOL).