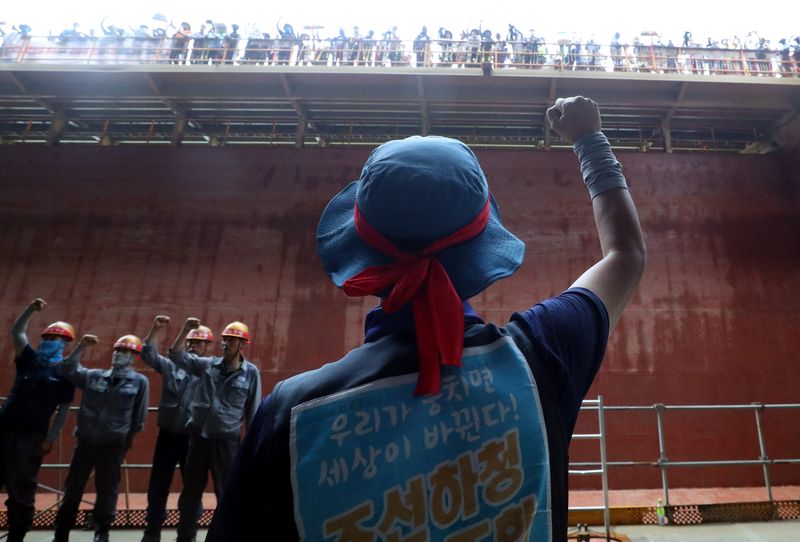 © Reuters. Members of the subcontractor union chant slogans on the floor of the occupied oil tanker during a strike at Daewoo Shipbuilding & Marine Engineering in Geoje, South Korea, July 19, 2022. The sign reads “We can’t live like this”. Yonhap via REUTERS

SEOUL (Reuters) – Striking contract workers and Daewoo Shipbuilding & Marine Engineering (DSME) have made some progress in talks over wage hikes, the two sides said on Wednesday, seeking to avoid the use of force to end a siege of the shipyard.

About 100 sub-contractors have occupied DSME’s main dock in the south coast city of Geoje since last month demanding a 30% pay increase, halting work at the yard that the company has said have led to delivery delays.

DSME and the Korean Metal Workers’ Union, which represents the strikers, said the two sides have been talking to narrow a difference over proposed pay increases, with the striking workers lowering their demand to 15%.

Union officials told Reuters on Wednesday the company is refusing to budge on its offer of a 4.5% pay increase. A DSME spokesperson declined to discuss details of the negotiations. A new round of talks was scheduled for Wednesday morning.

The fresh round of talks come as conservative President Yoon Suk-yeol’s government raised pressure on the strikers, calling the siege illegal and unacceptable and saying it was causing “tremendous damage” to an industry at a critical time on its path to recovery.

The contract workers launched the sit-in last month at the main dock of the country’s third biggest shipbuilder demanding a pay rise to make up for cuts in recent years when the industry struggled to survive a global slump. Since then orders have gradually recovered, thanks to pent-up demand from the pandemic.

DSME said it had won orders for 18 liquefied (LNG) carriers this year and its order book was full for the next three years, which could help the loss-making shipbuilder turn to profit.

FedEx Shares Fall After Berenberg Cut to Hold By Investing.com

Ireland fines Instagram a record $400 million over children’s data By...