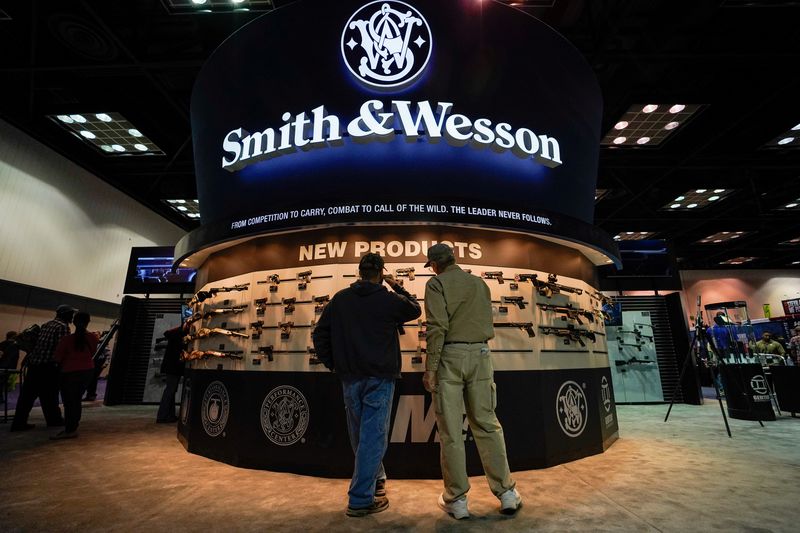 (Reuters) – Survivors of a mass shooting in July that killed six people and injured dozens in a Chicago suburb sued gunmaker Smith & Wesson Brands Inc on Wednesday, accusing it of deliberately marketing its weapons to violence-prone young men through social media and advertisements reminiscent of video games.

In a series of lawsuits filed in Lake County, Illinois Circuit Court, the survivors, including relatives of those killed, said the Springfield, Massachusetts-based company “knowingly sought to place its weapons in the hands of disturbed young men by targeting and exploiting the risk-seeking – and often troubling – desires of these consumers.”

Smith & Wesson did not immediately respond to a request for comment.

Six people were killed and more than 36 wounded at a Fourth of July parade in Highland Park, Illinois after a gunman opened fire on the crowd from a rooftop. Robert Crimo, 21, was arrested for the shooting hours later and pleaded not guilty to 117 counts including first-degree murder.

Wednesday’s lawsuits allege that Smith & Wesson knowingly advertised its weapons, including the M&P-model rifle used by Crimo, to appeal to “militaristic fantasies” of troubled young men.

That marketing included the “M&P” name, for “military and police,” which they said falsely implied an endorsement by the U.S. military and law enforcement. It also included the use of social media influencers and ads resembling first-person shooter games like “Call of Duty.”

“(Crimo) and other would-be mass shooters are highly susceptible to the disturbing promotional messages from Smith & Wesson,” the lawsuits said.

The plaintiffs said the company’s marketing violated two Illinois consumer protection laws by making deceptive statements and encouraging harm to the public. They are asking the court to stop Smith & Wesson from the allegedly illegal marketing, including by putting age restrictions on social media content and removing military references, and to award unspecified monetary damages.

Holding gunmakers liable in court for mass shootings has historically been difficult. A 2005 federal law, the Protection of Lawful Commerce in Arms Act, largely shields them from lawsuits over crimes committed with their products, though it makes an exception if they market them illegally.

Remington Arms in February agreed to pay $73 million to the families of five children and four adults killed by a shooter at Sandy Hook Elementary School in Newtown, Connecticut, the first such settlement by a gunmaker.

From Twitter To The X App: Deciphering Musk’s Vision For Web5...

Amazon: Unit Economics Recovery Could Double the Stock in 2024