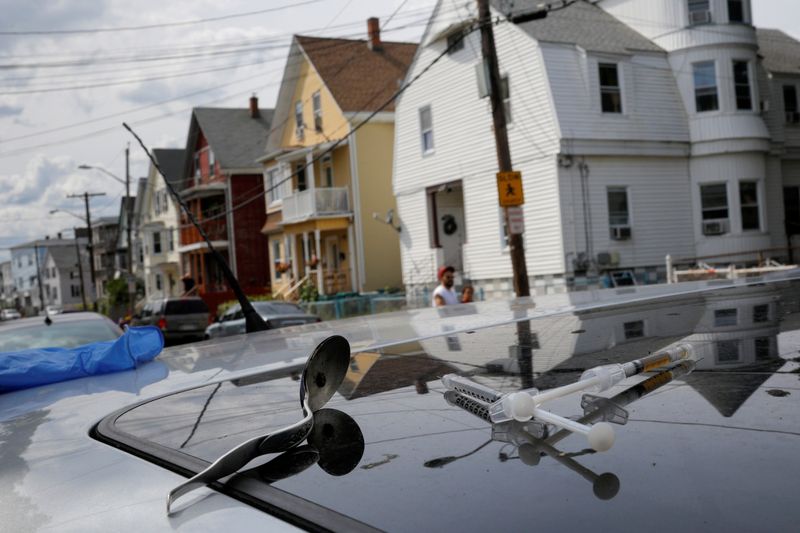 © Reuters. FILE PHOTO: A full syringe, empty syringe and spoon sit on the roof of the car in Lynn

(Reuters) – The three largest U.S. drug distributors, who are accused of helping fuel the opioid crisis that has resulted in nearly 500,000 overdose deaths in the United States, will defend themselves in a trial that kicks off on Monday.

They claim the companies ignored red flags that opioids were being diverted to illegal channels, flooding the state with hundreds of millions of highly addictive pills.

The distributors have denied the claims, arguing they cannot be liable for distributing pills that were prescribed by doctors.

Huntington and Cabell, along with other West Virginia towns and counties, opted out of a proposed $26 billion nationwide settlement with the three distributors and drugmaker Johnson & Johnson (NYSE:).

A verdict in the trial could help lay the groundwork for settlements in the sprawling nationwide litigation over the opioid crisis, which encompasses more than 3,300 lawsuits by local governments around the country against opioid manufacturers, distributors and pharmacies.

Opioids have resulted in the overdose deaths of nearly 500,000 people in the United States from 1999 to 2019, according to U.S. Centers for Disease Control and Prevention. West Virginia is among the hardest hit states, recording more opioid prescriptions and overdose deaths per capita than any other in 2018, according to data from the National Institutes of Health.