It has been a remarkable start to the year for General Motors (NYSE:). The automaker’s shares have so far rallied 38%, a performance three times better than the ’s return for the period.

When the largest U.S. automobile manufacturer reports earnings tomorrow, investors’ attention will be on the future amid current chip shortages that are forcing carmakers to cut production. 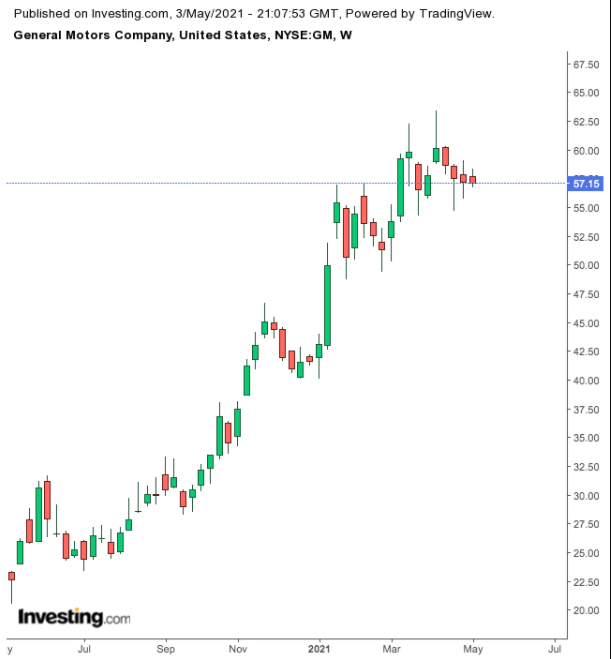 Automakers globally are facing a production squeeze after a surge in demand for products, like laptops and cellphones during the pandemic, created a chip shortage. The global increase in demand for semiconductors likely will persist for a few more years, according to Intel’s (NASDAQ:) new Chief Executive Officer Pat Gelsinger.

The company is reworking some of its factories to increase production and address the chip shortage in the auto industry, he said in an interview with CBS’s 60 Minutes program. It may take at least several months for the strain on supply to even begin easing, he added.

GM rival Ford (NYSE:) told investors last week that the chip shortage will cut $2.5 billion from adjusted pretax profit this year, the high range of the $1-billion-to-$2.5-billion estimate it provided in February. The company said the lack of semiconductors will force it to cut second-quarter production in half, but it expects the situation to improve after June.

Still, GM’s first-quarter profit is forecast to show a strong rebound when compared with the same a year ago, when demand for cars collapsed during the first wave of the pandemic. GM car sales increased 3.9% in the quarter, the company said last month.

Strength in deliveries of sport-utility vehicles, like the mid-size Chevrolet Traverse and full-size Cadillac Escalade, helped offset lower sales of vehicles that have been impacted by temporary shutdowns of plants in Ontario and Mexico.

Despite semiconductor scarcity that is prompting factory closures, GM expects a solid year of growth.

As GM’s chief economist Elaine Buckberg said in a statement:

“Consumer confidence and spending will continue to increase due to stimulus, rising vaccination rates and the progressive reopening of the economy. Auto demand should remain strong throughout the year.”

The Detroit-based GM is also being favored as its turnaround plan accelerates under Chief Executive Officer Mary Barra, who last year revealed more than $2 billion in new investments to support electric vehicles as part of her plan to phase out gasoline- and diesel-powered vehicles from its showrooms globally by 2035.

These steps coupled with strong sales show that the company is in a better position to take on the sector’s biggest disruptor, Tesla (NASDAQ:), which has a wide lead in the electric car market.

According to Morgan Stanley auto analyst Adam Jonas, Barra’s strategic decisions, including exiting Europe and purchasing the self-driving tech start-up Cruise, have put the company on a better path to compete in the EV market.

GM is likely to show impressive profit growth tomorrow, but its future outlook is uncertain due to chip shortages that are impacting auto supply chains across the industry. That said, GM stock remains a better bet among the traditional U.S.-based automakers due to the company’s impressive push to compete in the EV market.