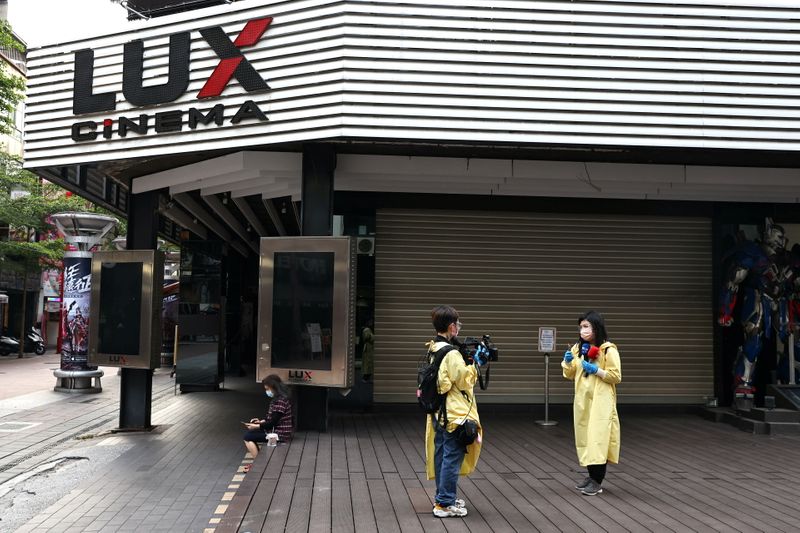 © Reuters. Reporters in protective gear work in front of a closed cinema, after the cinemas and other venues were ordered to close amid an increasing number of COVID-19 infections, in Taipei, Taiwan, May 15, 2021. REUTERS/Ann Wang

By Ben Blanchard and Liang-sa Loh

TAIPEI (Reuters) – Taiwan raised its coronavirus alert level on Saturday in the capital, Taipei, and the surrounding city, bringing curbs for a period of two weeks that will shut many venues and restrict gatherings in the wake of 180 new domestic infections.

Masks are to be worn outdoors for the first time, as the government encourages work and study from home, shutting cinemas and entertainment spots, while limiting gatherings of families and friends to five indoors and 10 outdoors.

Health Minister Chen Shih-chung said a “level of risk” in certain hot spots, such as Taipei’s gritty Wanhua district, had spurred the decision to raise the alert level.

“Only by doing this can infections be dealt with and controlled,” he told reporters.

Taipei Mayor Ko Wen-je urged people to stay home as much as possible, adding that schools teaching should move online.

“During this time, if you have nothing on, then stay at home and don’t go out, and if you do, wear a mask to reduce infection from droplets,” said Ko, a doctor by training.

President Tsai Ing-wen’s spokesman said she would reduce the number of “unnecessary meetings” or public events. The presidential office is close to Wanhua.

Amid pictures on social media showed people flocking to supermarkets to stock up on toilet paper and instant noodles, the economy ministry took to Facebook (NASDAQ:) to assure people that supplies were ample and there was no need to hoard.

The rising community infections unnerved the stock market this week, though the government says the island’s economic fundamentals remain good.

Deputy Finance Minister Frank Juan told Reuters authorities would watch market reaction on Monday, adding that he did not rule out calling a meeting of the National Stabilisation Fund, which the government can use to smooth large fluctuations.

Investors should act rationally, he said, pointing out that only a few sectors would be affected by the curbs, such as tourism, rather than the island’s crucial foreign trade.

The new restrictions do not apply to the chip-manufacturing hub of Hsinchu, and are unlikely to affect exports of semiconductors, a global shortage of which has shut some car factories.

Taiwan has millions of vaccine doses on order from Moderna (NASDAQ:) Inc and AstraZeneca (NASDAQ:) Plc, though only a small number have arrived from the latter due to global shortages and vaccination rates remain low.

More vaccines will start arriving next month, Tsai has said.

Since the pandemic began, Taiwan has reported fewer than 1,500 cases among a population of about 24 million, most of them imported from abroad, but a recent rise in community transmissions has spooked residents.

The island has never gone into a full lockdown and its people are used to life carrying on near normal, despite the pandemic ranging in many other parts of the world.