The Canadian marijuana grower posted its last Thursday after the close. The release showed one of the worst quarters for the Edmonton, Alberta-based company, sending its stock to its lowest level in 2021, hitting $6.70. 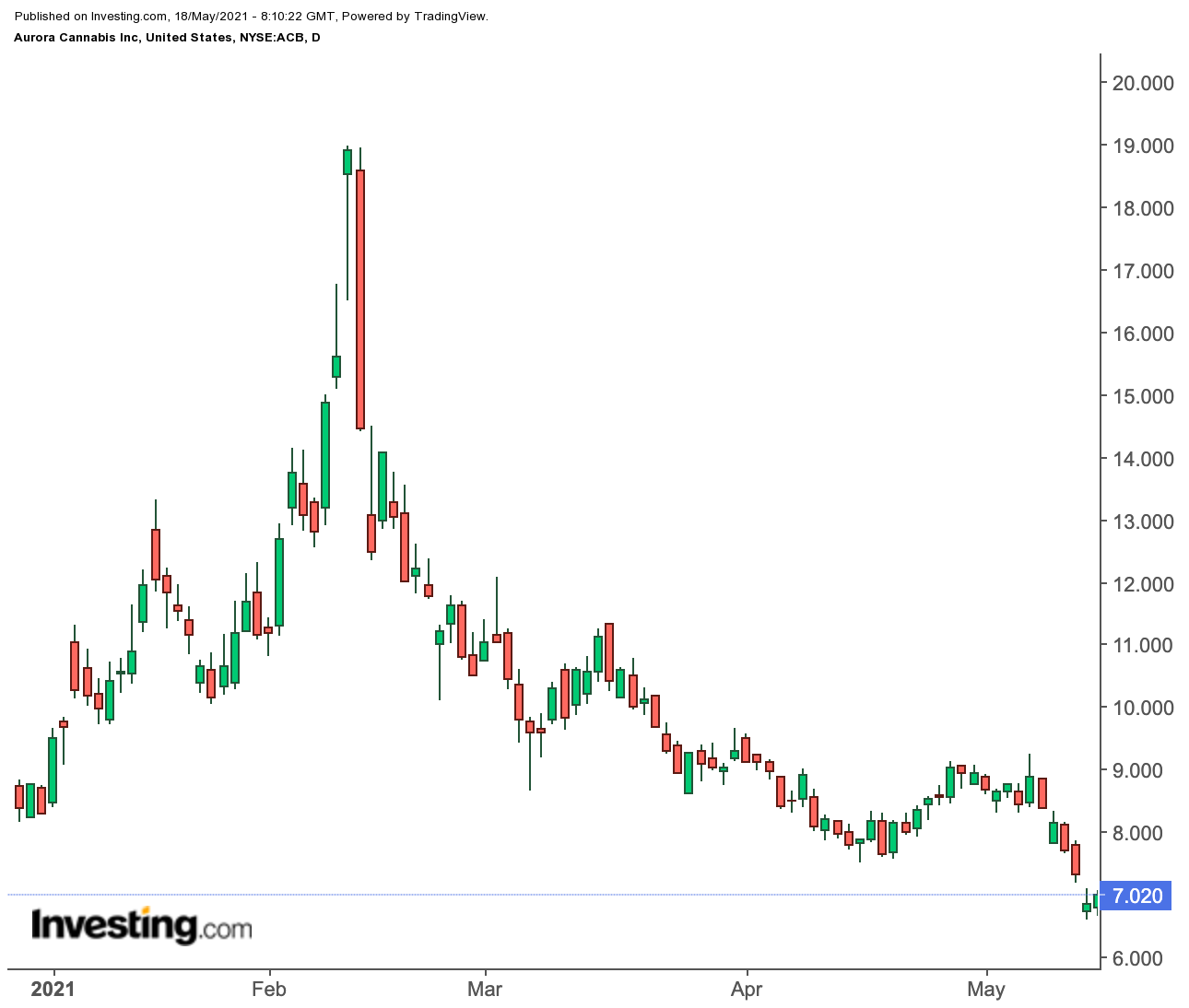 Shares have rebounded a bit since then, trading yesterday up just over 2% on the day to close at $7.02. If there was one positive to be found, the pot stock is doing better than it did in October, when it tumbled to about $4. But that’s not saying much.

What is speaking volumes is the chorus of analysts who are openly beginning to question what the cannabis grower should do moving forward.

In a note last week, an analyst with Cantor Fitzgerald reportedly raised the question about whether Aurora should get out of the recreational market entirely to focus its attention on the medical marijuana market, a sector where it put in its best performance in a dismal quarter.

Overall, Aurora posted revenues of C$55.1 million (US$66.3 million) in its third quarter that ended Mar. 31. This figure represents a 20.8% drop compared with the same period in the previous year. Analysts consensus were calling for revenues in the $68-million range. And aside from falling well short of expectations, the numbers offered the dubious distinction providing the company its worst showing in six quarters.

Sales in the recreational sector dropped 37%

Canaccord Genuity downgraded the stock last Friday, moving it from a ‘hold’ to ‘sell,’ while Cantor Fitzgerald kept its ‘neutral’ rating but lowered its target price.

“…we delivered the strongest performance in domestic medical and the best results in international medical cannabis of any Canadian LP during the period.”

This prompted Cowen analyst Vivien Azer to underline Aurora’s need to keep its emphasis on the medical sector on a more global footing.

But carving out bright spots might not be what investors are in the mood to do. Just over a year ago, Aurora stock was trading at slightly over $90 just before it fell off a cliff.

The stock is down just under 39% in the last year.

2 Pot Stocks Heading Over To NASDAQ

If all goes according to plan, two Canadian-based pot companies will soon be trading their US stock on the exchange.

Aurora Cannabis made the announcement when it unveiled its latest quarterly results last week, explaining it would move its US stock from the New York Exchange to the NASDAQ after the close on May 24. It will continue to use the ticker ACB.

“NASDAQ represents a good fit for Aurora and this listing transfer will enable us to realize cost efficiencies as part of our efforts to deliver long-term value to shareholders,” said the Aurora CEO.

Meanwhile, Calgary-based High Tide (OTC:) is looking to move to the NASDAQ upon approval later this month to reduce its costs. It had previously consolidated all of its issued and outstanding common shares on a 15-to-1 ratio to meet the minimum share price set by NASDAQ.

Modine Manufacturing Stock Back On Track