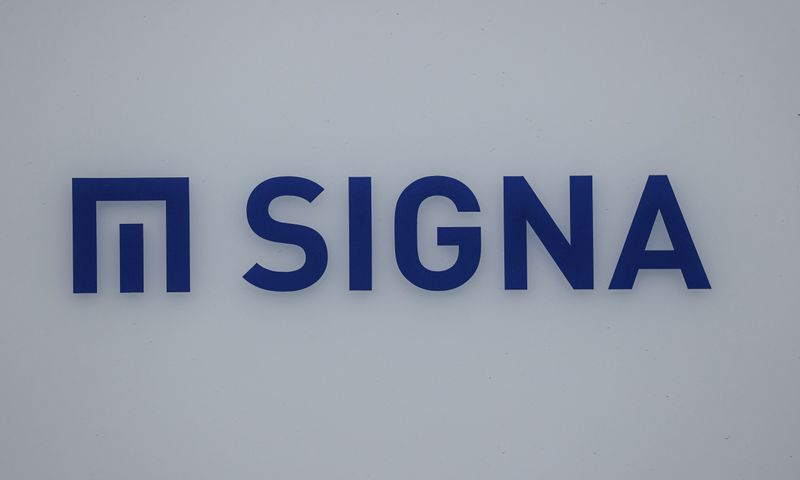 © Reuters. FILE PHOTO: A logo of Signa is pictured on a building nearby the Karstadt sport department store, in Berlin, Germany July 30, 2020. REUTERS/Fabrizio Bensch/File Photo

By Arno Schuetze and Patricia Uhlig

FRANKFURT (Reuters) – Signa Sports United, owned by Austrian investor Rene Benko, has agreed to a U.S. listing through a blank-check merger that values the online sports goods retailer at $3.2 billion, the company said on Friday.

The deal will raise $645 million for Signa Sports United, with $345 million from special-purpose acquisition company (SPAC) Yucaipa Acquisition and $300 million from investors through private investment in public equity (PIPE).

Signa, the global no.1 pure play online sporting goods retailer, will use part of the proceeds to buy Britain-based bicycle goods store Wiggle, which has annual sales of about $500 million, the company said in a statement.

“Becoming a listed company allows us to continue capturing market share in Europe and to accelerate our U.S. and international expansion while scaling our platform solutions,” CEO Stephan Zoll said in the statement.

The Wiggle deal will make Signa Sports United about four times larger in the sub-sector than runner-up Bike24, which is in the process of listing its shares in Frankfurt.

Wiggle’s owner, private equity firm Bridgepoint, will become an investor in Signa Sports as part of the deal.

The SPAC listing values Signa Sports United at 1.6 times the $2 billion in revenue it expects to post in its 2021/22 fiscal year ending in September. That compares to a multiple of 2.7-6.5 times that online retail peers such as THG, Stitch Fix (NASDAQ:), MyTheresa and Farfetch (NYSE:) trade at.

Signa explored a stock market listing in 2018 at a valuation of 1 billion euros ($1.22 billion) but then opted for a fundraising, bringing in Asian retailers Aeon Co Ltd and Central Group as well as German insurer R+V, which will remain shareholders after the listing.

SPACs raise funds in an initial public offering to buy a private firm, which then automatically gets a stock market listing.

The company operates more than 80 Web shops in 17 countries, reaching over 7 million online customers a year. Including its latest acquisitions, the group expects adjusted core earnings of $70 million on sales of about $1.6 billion in its current fiscal year to September.

Signa Sports United plans to continue growing its revenues by more than 25% annually and aims to triple its profit margin to 12%-15% in the long term, banking on scale effects, pricing technology and the expansion of its technology offering for third-party vendors.

After the Yucaipa deal, which is being organised by Citi and Jefferies (NYSE:), property investor Rene Benko’s Signa Holding will own about 50% of Signa Sports United.