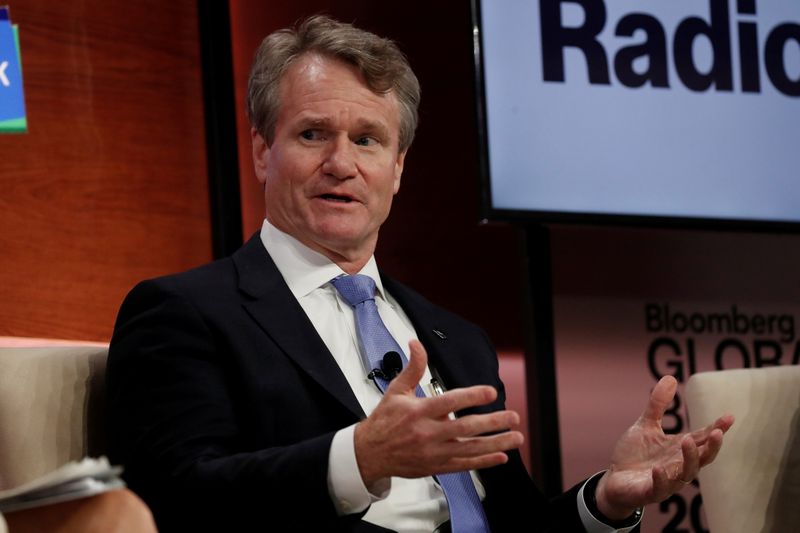 NEW YORK (Reuters) – When Brian Moynihan took the reins at Bank of America Corp (NYSE:) in 2010, the U.S. bank was reeling.

Its former CEO suddenly left as scandals and probes related to a major acquisition unfurled. Its stock price was tanking, and the global financial crisis was still going strong.

Since then, Moynihan, 61, has not just righted the ship, but transformed Bank of America, leaving analysts, industry people and some investors wondering what – and who – comes next.

Moynihan has no imminent plans to leave, but as his tenure continues, so does the mystery of who will replace him. Candidates who were clear front-runners have grown too old, while those recently promoted to Bank of America’s management committee are too fresh-faced.

That leaves Moynihan with a new challenge over the next few years: determining who would best replace him, and marketing that person to the world without alienating other senior executives.

“Who becomes CEO is not a minor thing,” said Sydney Finkelstein, professor at Dartmouth’s Tuck School of Business.

Moynihan’s predecessor, Ken Lewis, left after months of public drama and decisions that resulted in criticism from lawmakers, regulators and investors, Finkelstein noted. Although Moynihan has the bank on much steadier footing, he has been there long enough for constituents to want a road map for the future, Finkelstein said.

“You’re not going to leave the bank in that same mess,” he said. “OK, well, what are you going to do?”

Moynihan was not available for an interview, said a spokesperson, who declined to comment for this story.

It is not unusual to have leadership voids at companies with relatively fresh CEOs who want to groom deputies over 5-10 years. The situation is less common at companies with CEOs who have been in place for a long time, and have effectively executed their visions, sources said.

Of the six biggest U.S. banks, Bank of America is the only one not to have changed CEOs in recent years or outlined a relatively clear succession plan lately.

Circumstances are different at each institution. Yet it leaves Moynihan as the longest-tenured CEO on Wall Street who has not offered a crisp idea of who is next, analysts said.

“Up until now, Brian Moynihan has wanted to see through the changes that he spearheaded,” said Piper Sandler analyst Jeffery Harte. “But now he has done that.”

The perfect successor would be about 45-50 years old now, have experience leading different parts of Bank of America’s eight businesses, be comfortable with regulators and understand the bank’s social-purpose agenda, said several recruiters.

That leaves no obvious internal candidate to succeed him.

“Now that he has four or five years of runway left, investors should be rightfully saying, ‘Hmmm,'” said one former bank employee.

Bank of America’s board takes succession planning seriously and has the topic on its agenda, said a different person who was familiar with the board’s thinking. The board met twice last year to discuss the topic.

They both spoke on condition of anonymity to discuss confidential matters or avoid professional consequences for speaking to the press.

Moynihan’s No. 2, Tom Montag, could take charge if his boss had to leave immediately. But at 64, Montag is not viewed as a long-term CEO candidate.

‘RESPONSIBLE GROWTH’ Few expect Bank of America to outline a detailed succession plan any time soon, but a prolonged search can be risky because the best people may grow impatient and leave, sources said.

Moynihan won his own succession battle partly because of his legal expertise. He spent years resolving hairy regulatory probes and lawsuits, including a $17 billion settlement with the Justice Department in 2014.

He also set his sights on cost-cutting and integrating a tangle of businesses that created Bank of America from deals spanning two decades.

As the global economy heals from COVID-19 and business picks up, analysts expect the bank to do even better.

Investors like Warren Buffett have embraced Moynihan’s mantra of “responsible growth.” Buffett has accumulated nearly 12% of Bank of America shares, while selling stock in rivals.