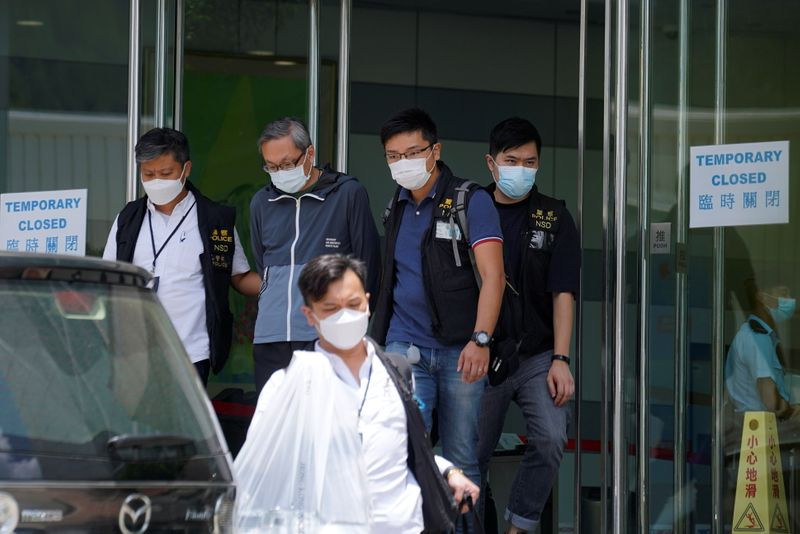 HONG KONG (Reuters) – Crowds gathered outside a Hong Kong court early on Saturday ahead of a hearing for two executives of pro-democracy newspaper Apple (NASDAQ:) Daily charged under the city’s sweeping national security law, in a case that has drawn international condemnation.

Editor-in-chief Ryan Law, 47, and chief executive Cheung Kim-hung, 59, were among five Apple Daily executives arrested on Thursday when 500 police raided the outlet’s newsroom, which authorities described as a “crime scene.”

Both are charged with collusion with foreign powers, raising alarm over media freedoms in the financial hub as authorities intensify a crackdown under the contentious legislation.

“I hope the two being charged can think about themselves first. They also have their families. I worked with them before. We are like friends.”

The national security law imposed by Beijing in 2020 on the former British colony has brought an authoritarian tone to most aspects of life in Hong Kong, including education and arts.

It punishes what Beijing broadly refers to as secession, subversion, terrorism and collusion with foreign forces with up to life in prison.

Police said dozens of the newspaper’s articles were suspected of violating the national security law – the first time media articles have been cited as potentially falling foul of the legislation.

“Right now, you can be charged with NSL because of a word or a speech that they didn’t like. It’s a big regression,” Lo, 29, a reader of the popular, 26-year-old paper, said.

The arrests and scale of the Apple Daily raid have been criticised by Western nations, global rights groups, press associations and the chief U.N. spokesperson for human rights.

Apple Daily and its listed publisher Next Digital have come under increasing pressure since their owner, pro-democracy activist and staunch Beijing critic Jimmy Lai, was arrested last year under the legislation.

Lai, whose assets have been frozen under the security law, is already in jail for taking part in unauthorised assemblies and awaiting trial in his national security case.

As investigations into Apple Daily and its senior executives ramp up, some employees and observers have expressed deepening concern over the newspaper’s future.

Since the law was imposed by Beijing in June last year, more than 100 people have been arrested, with most denied bail.