In yesterday’s episode of CNBC’s Mad Money, host Jim Cramer said about home appliance manufacturer Whirlpool (NYSE:), during the “lightning round” where he speedily offers up his two cents on a list of securities, “I like Whirlpool very much…I’m going to be a buyer.”

With all due respect to Cramer, we completely disagree. After his rapid recommendation, we checked out the stock’s technical chart and—to put it mildly—we didn’t like what we saw. There seems to have been a lot of selling lately.

So we did a little digging and found that company executives have apparently been dumping the company’s shares. That’s never a great sign.

Take for example Joseph Liotine, the Executive VP and President of North America Region. Over the last three months he’s sold off $2.6 million worth of shares.

At the same time, there is no record of management buying the stock during the last year. They apparently don’t think the recent, as well as current, price is a bargain.

To clarify, on its own this doesn’t necessarily indicate any nefarious activity or that company insiders know something that would lead to a selloff. Still, it doesn’t exactly bolster confidence in the Benton Harbor, Michigan-based company’s stock either.

All things being equal, however, the broader consumer spending winds are shifting. Though the purchase of big-ticket items for such things as home appliances peaked in the US during the pandemic lockdowns, with the reopening consumers have begun looking forward to spending on travel and out-of-the-house entertainment instead.

That’s an argument for the price of Whirlpool shares to run stale, if not drop outright. Here’s what the chart is signaling: 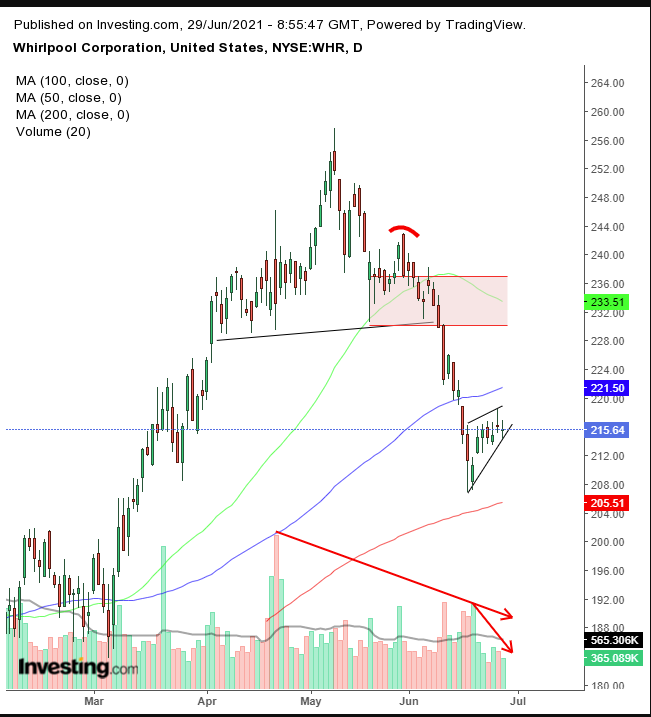 The single largest insider share sale occurred between the $237 and $230 levels, making up the right shoulder of an H&S top. However, notice that the right shoulder actually peaked at $243.04, which resulted in a Bearish Engulfing pattern. This perhaps suggests there was heavy selling in addition to that single $2.6 million sell order we know about.

As a matter of fact, the Rate of Change, which measures momentum, provided a negative divergence to the rising price between mid-March and the early May ‘head.’ Also, volume peaked when the price built the left shoulder and waned when it eked out a higher peak, forming the head. Those are signs of weakening demand…and that was before Liotine made his huge sale.

At any rate, the price completed a H&S top, with the bottom occuring around the time of the executive’s sale. Whirlpool has since rebounded from the $206.84 mid-June low.

However, it failed to cross back over the 100 DMA, after falling below it, doing the same with the 50 DMA amid the right shoulder. The recent rise was followed by profit-taking, a 13% plunge in just nine sessions, between the high of June 7 and the low of June 17, forming a Rising Flag.

While it may be counterintuitive, despite the flag’s rising, it’s the making of a bearish pattern—complete with the downside breakout. Indeed, the fact that it’s rising makes it bearish, as it demonstrates it’s only doing so upon take-profit moves by short-sellers (OK, and maybe some dip buyers).

Why do we presume it’s short sellers, rather than bulls?

Note the dried-up volume, following the selloff. That indicates in which direction, buying or selling, the power exits. Right now it’s with the sellers. This confirms the above mentioned Rate of Change. It displays how momentum has been falling since peaking out in mid-March.

The H&S was needed to push prices below the 50 DMA and the 100 DMA, but traders used the 200 DMA benchmark as an opportunity to cash out, allowing the market to take a breather, letting fresh short sellers sitting at higher price sell short. This is expected to break the flag’s bottom and provide a signal for earlier bears to jump back in for another leg down.

Conservative traders should wait for the price to fall below the 200 DMA, followed by a rise that confirms the primary moving average’s resistance, before shorting the stock.

Moderate traders would short after a breakdown that includes a whole, long candle underneath the flag.

Aggressive traders could short at will, provided they have a preset plan that justifies the risk. Here is an example: 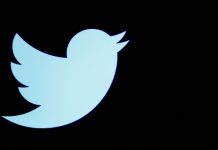 Google backs India’s ShareChat in $300 million funding round at $5...

Toyota to suspend morning shift in one Japanese factory due to...