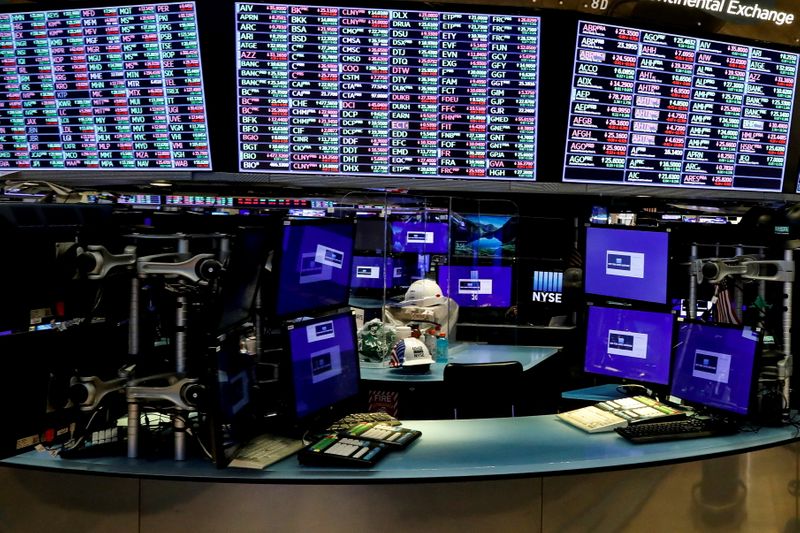 © Reuters. FILE PHOTO: Dividers are seen inside a trading post on the trading floor as preparations are made for the return to trading at the New York Stock Exchange (NYSE), May 22, 2020. REUTERS/Brendan McDermid

By Devik Jain and Medha Singh

(Reuters) – The kicked off the second half of the year at a record high on Thursday, as data showed fewer-than-expected weekly jobless claims and energy stocks were supported by a spike in oil prices.

Eight of the 11 major S&P sectors rose in early trading, with energy, financials, industrials and materials leading the charge.

Initial claims for state unemployment benefits dropped 51,000 to a seasonally adjusted 364,000 in the week ended June 26, while layoffs plunged to a 21-year low in June as companies held on to their workers amid labor shortages.

“Staying below that big-round-number 400,000 level could bolster confidence in risk-taking during the dog days of summer.”

With the S&P 500 and the Nasdaq hitting a series of record highs last month, investors are razor-focused on Friday’s nonfarm payrolls report, where a strong reading could force the U.S. Federal Reserve to rethink its accommodative stance.

Focus also shifts to the second-quarter earnings season in the coming weeks to gauge whether the first-half momentum could continue further for the remaining year.

“The markets had a year’s worth of gains. We are looking a period of consolidation and continued rotation within sectors,” said Rick Meckler, partner at Cherry Lane Investments, a family investment office in New Vernon, New Jersey.

Walgreens Boots Alliance (NASDAQ:) Inc dropped 6.5% as it lowered the forecast for COVID-19 vaccine shots to be administered this year.

Micron Technology Inc (NASDAQ:) slumped 4.5% even as the chipmaker beat estimates for quarterly profit and forecast fourth-quarter revenue above expectations.

MGM Resorts (NYSE:) International rose 2% after the U.S. casino operator said it will buy the remaining 50% stake in its JV, CityCenter Holdings LLC, for $2.125 billion from Infinity World Development.

The S&P index recorded 23 new 52-week highs and no new low, while the Nasdaq recorded 30 new highs and 10 new lows.